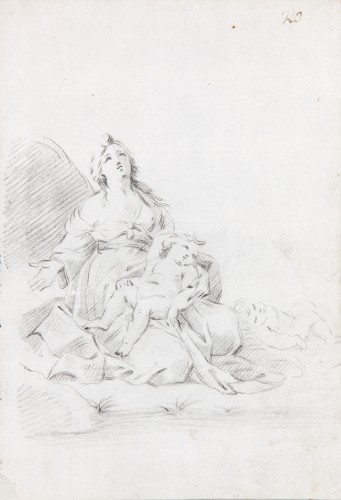 José del Castillo was born in Madrid in 1737. At the age of ten he embarked on his artistic training in the drawing classes of the Preparatory Department of the Academia de San Fernando, directed by José Romero. Soon noted for his outstanding abilities, in 1751 he was funded by José Carvajal y Lancaster to study in Rome with Corrado Giaquinto (1703-1766), with whom he returned to Spain in 1753. In Madrid the young painter continued with his drawing classes at the San Fernando Academy and in 1755 entered the triennial competition, winning first prize and the gold medal.

In 1758 José del Castillo was awarded another travel grant by the Academia to go to Rome, where he remained until 1764 under the protection of Francisco Preciado de la Vega. The so-called “Italian sketchbooks” (1761-1762, Madrid, Prado Museum) date from this period and reveal Castillo as one of the finest draughtsmen of the day.

Having completed his training, the artist petitioned for employment at court and joined the Royal Santa Barbara Tapestry Manufactory where he was one of the team of painters directed by Giaquinto that produced the interior decoration of the Royal Palace of El Pardo. Castillo worked alongside Andrés de la Calleja, Guillermo Anglois, Antonio González Velázquez and Francisco de Goya, among others. From that point onwards, however, Castillo’s career was less successful and he obtained few commissions other than those for the Tapestry Manufactory, for which he produced major cartoons such as the one for the hangings in the King’s Bedroom in the Royal Palace in Madrid (1770-1773), the new tapestry for the Prince’s Chamber at El Escorial in 1773, and those for the Princess’s private room at El Pardo and at El Escorial between 1775 and 1776.

Alongside his activities as a designer of cartoons Castillo worked with Andrés de la Calleja on the restoration of the frescoes by Luca Giordano in the Casón del Buen Retiro. He also collaborated with Antonio Carnicero and Pedro Antonio Arnal on the illustrations for Joaquín Ibarra’s edition of Don Quixote, a project sponsored by the Real Academia de la Lengua. In the late 1780s Castillo experienced financial problems: having been made an Academician in 1785 he was not appointed Painter to the King, possibly, in Ceán words, because his works were considered to lack “harmony in the colours […], observation of optics and perspective and [….] contrasts of the groups and figures”1. Nonetheless, in 1787 the Count of Floridablanca commissioned Castillo and Gregorio Ferro to paint the ceilings of his residence in Madrid, for which they produced a series of Pompeian style decorations that alternated allegorical and mythological figures. At the end of his life Castillo worked on the re-modelling of the church of Santos Justo y Pastor in Madrid, painting the main altarpiece on the subject of Saints Justo and Pastor led to Martyrdom, now only known through the preparatory oil sketch in the Lazaro Galdiano Museum, Madrid. Castillo died in poverty on 5 October 1793.2

This unpublished drawing depicts part of the painting Latona transforms the Lycian Peasants into Frogs. Executed in pencil, it is a rapid sketch of the painting on that subject by Giuseppe Bartolomeo Chiari (1654-1727), now in the Palazzo Spada, Rome. It should be related to José del Castillo’s taccuini or “Italian Sketchbooks” now in the Prado Museum. These sketchbooks are a compilation of drawings that the artist produced during his second trip to Italy. They include notes on and drawings of both classical works of art and others by the great 16th– and 17th-century masters, as well as details on the locations where Castillo made these drawings. We know, for example, that he visited the Pamphilij, Conti and Borghese palaces in Rome as well as the Palazzo Spada3.

While the present drawing cannot be associated with any particular group, the fact that it bears the number “20”, as well as its comparable size, paper and technique, suggest that it may have formed part of another sketchbook of drawings by the artist that was split up at some point.