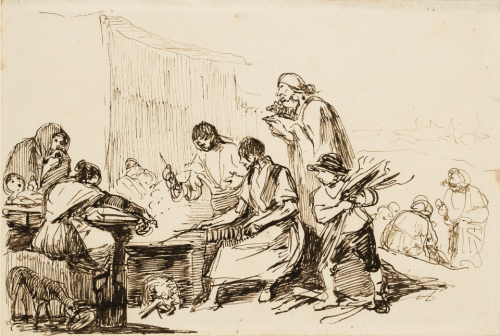 Leonardo Alenza was one of the most esteemed artists of the Romantic era in Spain and thus one of the most celebrated of the 19th century in that country. His work reveals a profound interest in reflecting the society of his time through both his paintings and drawings, and a large number of the latter have survived. Some of them were created as the basis for prints but most are independent works given that they are not preparatory studies for more significant creations. Rather, these images reflect Alenza’s personal vision of the world around him, on many occasions a profoundly critical one. In these scenes it is the lives of the humblest social classes and the different peoples and customs of Spain’s regions which provide the key motifs, expressed in an infinite number and variety of rapid sketches filled with mastery, expressive force and grace.   Alenza studied drawing with Juan Antonio de Ribera and attended José de Madrazo’s classes in composition and colour at the Real Academia de Bellas Artes de San Fernando. However, as Ossorio y Bernard noted, his principal model was the work of Goya,[1] from whom he assimilated his interest in depicting the most unprotected members of society and his use of a muted, grey-brown palette. After completing his studies one of Alenza’s most important activities was that of graphic chronicler for the Semanario Pintoresco Español, while he also produced the illustrations for the publication of Los españoles pintados por sí mismos, and subsequently contributed to publications such as Gil Blas and the newspaper El Reflejo. In 1833 the city council of Madrid commissioned him to execute An allegorical Painting of the Oath of Loyalty and Proclamation of Isabel II,[2] and from that period onwards Alenza combined commissioned work with participation in the official exhibitions. He also produced various portraits which reveal his admiration for Velázquez in the use of plain, dark backgrounds and their profound psychological interpretation of the sitters’ inner natures. Examples include the portraits of The Mayor of Madrid, the Count of Montarco (RABASF, inv. 1157) and Manuel Pasutti (MNP, cat. P-004204). In 1842 Alenza was made an academician of merit following the presentation of his canvas David defeating Goliath (RABASF, inv. 0724) but shortly after he died of tuberculosis in Madrid like many of the characters he depicted in his works; desperately poor and having failed to achieved the public recognition that his works deserved.

As noted above, Alenza’s corpus of drawings is extremely large. After his death his step-mother owned twelve albums containing 1,750 drawings. Of them, 465 were acquired by the Biblioteca Nacional in two groups between 1876 and 1877, shortly after the artists death; the Museo Lázaro Galdiano has just over 300 drawings in five albums;[1] and the remainder are divided between different institutions, including the Museo de Historia de Madrid[2] and the Museo del Romanticismo,[3] and private collections. The technique of these works is extremely varied, ranging from the coloured wash used for News of the War (fig. 1) to sepia tones or simple black chalk drawings, such as The Blind Man (BNE, sign.DIB/15/40/76), but the most sizeable group comprises the works in pen and black or sepia ink. These are rapid sketches filled with energy due to the use of swift, zig-zagging strokes that give the figures movement. The present drawing is a work of this type, depicting an everyday scene of the kind that took place throughout the city and comparable in that sense to Street Violinist (fig. 2) and The Snow Water Seller (BNE, sign.DIB/15/43/262). Seen seated and from behind in the left foreground is a humbly dressed woman wearing a shawl. She is working from a tub in which she is mixing and taking out some type of foodstuff, probably churros [fried doughnuts] to judge from their shape and her manner of working as she places them on a small stove to fry. The stove is fed by logs and another woman stirs and extracts the now fried churros from its upper section and places them on another stick held in her left hand in order for the excess oil to drip off. Next to the woman seen from behind are a mother and daughter who are waiting to buy the fresh churros, the daughter’s face conveying happy anticipation. The woman taking out the churros is surrounded by other figures: a boy carrying wood to stoke the stove, another holding a stick in his right hand who has also managed to obtain some churros from the vat of oil, and a man standing behind the principal group who is already enjoying some of these delicacies. In the middle-ground, drawn with succinct and lightly suggested strokes, groups of people gather round the improvised churros stand, eating them as they chat to each other. Finally, in the background it is possible to make out the outline of the city, suggesting that these individuals are located in the area around the Pradera de San Isidro in front of the river Manzanares and the city, in what was one of Madrid’s most authentic working-class barrios during the early 19th century. Alenza’s ability to employ the greatest economy of means to depict and transmit this entire episode and to introduce the viewer into this small scene of daily life in Madrid is remarkable and fully reveals his mastery. The image is totally devoid of any social critique; rather, just as he did in his drawings for newspapers of the time, he aimed for the characteristic image and the chronicle of daily life.