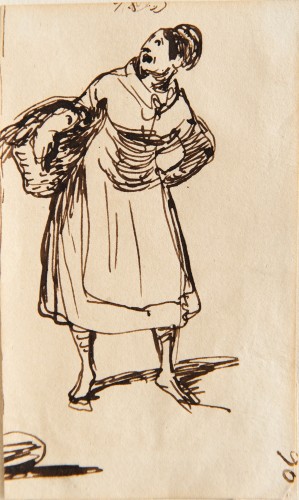 Picturesquely dressed working-class girls and youths [termed majas and chulos respectively in Spanish], street sellers, beggars, gallantry and squalor make up the subject matter of numerous drawings by Leonardo Alenza, who focused on Spanish popular culture throughout his career. Most of these drawings, whether executed in pen or in wash, are not preparatory studies for paintings but simply respond to the artist’s desire to draw the picturesque figures and scenes that presented themselves before his eyes. All these drawings, however, share the enormous expressive power through which Alenza, a brilliant draughtsman, conveyed the events taking place around him. His drawings can be considered a graphic chronicle of Madrid of his day, constituting a gallery of everyday figures and episodes recounted in a simple, direct and unexaggerated manner and with a notable degree of truth and naturalness.

Alenza was born in Madrid and lived there throughout his life. As a young man he learned the basics of drawing from Juan Antonio de Ribera and at the classes given by José de Madrazo at the Real Academia de Bellas Artes de San Fernando in Madrid. 1 Having completed his artistic training he soon began to receive official commissions. In 1833, for example, the City Council of Madrid entrusted him with the execution of an Allegorical Depiction of the Oath and Proclamation of Queen Isabel II. 2 Alenza combined such commissions with painting works for submission to the official exhibitions in Spain, with his activities as an illustrator for Semanario Pintoresco Español and with the illustrations that he produced for Los Españoles pintados por sí mismos [Spaniards painted by themselves]. In 1842 he submitted a painting of David defeating Goliath to the Academia de Bellas Artes (Madrid, Real Academia de Bellas Artes de San Fernando), on the basis of which he was accepted as a member of that institution. By this date Alenza was already suffering from tuberculosis and he was only able to occupy his position at the Academia for a short time, dying two years later on 30 June 1845. He thus personifies to perfection the literary archetype of the Romantic artist, desperately poor, sick and unrecognised for his talents during his lifetime.

Alenza’s work is now considered to represent the most innovative trend within picturesque Romantic art in Spain. It can be divided into his facets as a painter and as a draughtsman. As a painter Alenza’s canvases reveal his interest in Velázquez, particularly in his portraits, with their profound psychological insight and their dark, plain colours. Examples of this style include the pair entitled Portrait of a Boy in the 17th-century Style (Museo del Prado, on deposit with the Museo Romántico, P-3309), and Portrait of a Girl in the 17th-century Style (Museo del Prado, on deposit with the Museo Romántico, P-3310). He was also influenced by Goya, from whom he derived a taste for the depiction of the socially marginalised and condemned individuals and the use of a muted, greyish-brown tonal range. In general, Alenza is considered to be one of the Spanish artists most influenced by Goya, as can be seen, for example, in canvases such as The Last Rites (Madrid, Museo Nacional del Prado, P-4210) and A Forge (Madrid, Museo Lázaro Galdiano, inv. no. 2344). Another aspect of Alenza’s activities as a painter are the decorative schemes that he created for commercial premises such as the interior of the Quiroga shop or the now vanished Café de Levante. Examples of this type of painting are to be found in the Museo del Prado (P-7605 and P-7606) and in the Museo Lázaro Galdiano (inv. nos. 7979 and 7980), while the Museo de Historia de Madrid has one of the related preliminary drawings. 3 For Cruzada Villamil, this aspect of Alenza’s activities was the one “in which he seems to have made most effort”. 4

Alenza was a tireless draughtsman and there are numerous examples of his graphic output in the Museo del Prado, the Museo de Historia de Madrid, 5 the Museo Romántico, 6 the Museo Lázaro Galdiano, which houses 12 albums containing more than 300 drawings, 7 and the Biblioteca Nacional, which has more than 400 drawings divided into 5 albums. Alenza’s graphic output was vast due to his enormous technical facility, his capacity for improvisation and his brilliant ability to capture in a few light strokes any scene that presented itself before him on the streets of Madrid. It was this boundless passion for drawing everything around him that has made Alenza the great narrator of the habits and customs of the popular classes and the urban poor in the Madrid of his time. His rare gifts brought him work as an illustrator for a variety of publications including Semanario Pintoresco, for which he worked for some years, Los españoles pintados por sí mismos, the 1840 edition of Gil de Blas, the newspaper El Reflejo in 1843, and The Complete Works of Quevedo.

The three drawings presented here depict The Barouche, The Street Seller and A Maja. All are depicted in the same technique of pen and sepia ink on yellowish toned paper. They all reveal Alenza’s typical technical mastery and grace, with lines that convey enormous energy, vitality and expressive force. Particularly striking is the manner in which the artist creates the rapid, zigzagging shadows, which give movement to figures that seem to be alive. In The Barouche, for example, the men seem to be getting into the carriage while the other one holds back the horse. In The Street Seller we seem to hear the woman’s voice as she offers her wares to passers-by, while the Maja makes a dance-like movement in order to initiate a flirtation with a young man located outside the pictorial space.

All these subjects frequently recur in Alenza’s work and are particularly numerous in his rapid sketches. The present drawing of The Barouche can be compared to one in the Museo de Historia de Madrid entitled Coach and Horses with Figures, 8 which was engraved by Isidoro Rosell in 1877; The Street Seller is comparable to a number of drawings on street trades by the artist such as The Water Seller (Madrid, Biblioteca Nacional de España, BNE, inv. 15/43/327), Old Woman with a Basket (BNE, inv. no. 15/44/405), The Cobbler (BNE, inv. no. 15/44/445), and The Chestnut Seller (MNP, D-5329). Finally, the present Maja can be seen as part of an entire series of scenes of flirting and gallantry, similar to Gallants (MNP, D-5336), The Suitor (BNE, inv. no. 15/43/316), Maja from Madrid (MNP, D-5331), and Bullfighters and Majas (Museo de Bellas Artes de Córdoba, inv. no. CE1670D).

Through his use of single figures or simple compositions Alenza thus succeeded in creating a rich and extensive narrative of everyday life in Madrid, creating a living gallery of contemporary characters in a simple, natural way that reveal the daily life of mid-19th-century people and depict the colourful and characteristic types of individuals to be seen in the capital. Above all, it is the simplicity and spontaneity of these drawings that appeals to us and which gives them their charm, making them not just a part of Spanish art history but of the country’s cultural and artistic heritage.