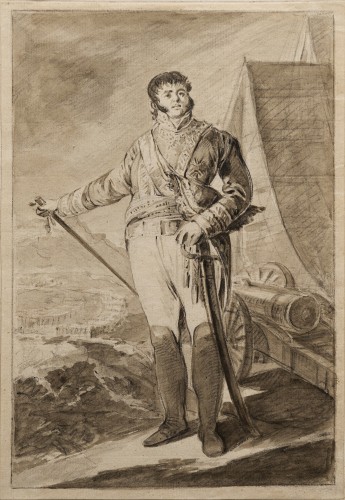 Francisco Tomás de Longa y Anchía was born in Mallabia, Vizcaya on April 19 1783. He started his work as a blacksmith’s apprentice. In 1808, after the Napoleonic invasion of Spain he joined the Party of the Hundred Men for the defense of the nation, that will engage in guerrilla warfare in the lands of Burgos and Álava. These men used to attack the Napoleonic convoys that arrived to the Iberian Peninsula, they neutralized them and took control of their mail and provisions. The growth in size of these troops was spurred by its effectiveness, eventually becoming a real military unit, that took the name of Iberian Division. In 1812, this unit took control of Castro Urdiales and a year later it reached its greatest moment in the battle of Vitoria, under the orders of Thomas Graham, Baron of Lynedoch. Their men acted as explorers in the advance of the allied army on the city. The outstanding military actions of Francisco Tomás de Longa were recognized by King Ferdinand VII with the Cross of Distinction of the Seventh Army and his appointment as field marshal.

This drawing is a portrait of Francisco Tomás de Longa and it was made by Vicente López probably after the return of the artist to Madrid. His extraordinary mastery in capturing in the canvas the idiosyncrasies of the characters portrayed led King Ferdinand VII to demand his presence in the Spanish court. On March 1th of the following year, Vicente López was appointed First Chamber Painter. A proof of his value is that his portraits of important commanders of the French army would not become an obstacle for his appointment, in contrast with Antonio Carnicero (1748-1814), who was removed from his position because it was interpreted that he served a foreign king. From then on, Vicente López will be the most requested painter of the aristocracy and wealthy bourgeoisie of Madrid. He combined these private orders with his work in the Palace, his teaching activity and his other official positions.1 It is probably his appointment by Fernando VII and the fact that he became the most sought after painter of his time, what led Francisco Tomás de Longa, Field Marshal of the Royal Armies in 1814, to request his service for this portrait.2

This drawing, unknown until now, is a preparatory sketch of the Valencian artist to compose a big canvas that it is still kept by the family of Marshal Longa (fig. 1). The thoroughness of Vicente López made him tirelessly draw and sketch most of his works, whether they were mural decorations, composition paintings of religious, historical of portrait themes, copies of big masters, landscapes, academies or preparatory works for engravings.3 Both in the sketch as well as in the final canvas, Vicente López portrays the character in a respectful way, objective and realist as it is typical of the style of this artist. Francisco Tomás occupies the center of the scene and displays a proud demeanor. The magnificence of the figure is highlighted even more by the slighty sotto in su perspective in which he appears and its scale, almost monumental. The character, characterized as a marshal, shows over his uniform as a General, the Cross of the Seventh Army and a sash, typical of his rank. In his right hand he has a baton, while in his left hand he holds a bicornio hat. His left hand is sustained over a honor sable that Lord Wellington gave him in the name of the Prince Regent of England after the battle of Vitoria. The scenery in which he appears represented is a landscape in a hillock with a military camp. On his left, there is a sketch of a field tent and on his feet an artillery cannon. In the background on the right, the troops that took part in the Battle of Vitoria are sketched. This is the most important battle in which Longa took part and the main reasons for which he obtained the highest military honors, the remembrance of which Vicente López wanted to preserve with his paintbrushes.