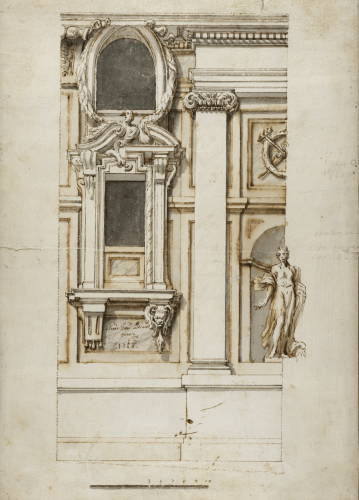 Within the context of 18th-century Spanish art a key role was played by the González Velázquez brothers: Alejandro (1719-1772), Antonio (1723-1797) and the eldest, Luis (1715-1763), sons of the sculptor Pablo González Velázquez, from whom they must have learned their first notions of art in the fields of drawing and sculpture. At a time when the artistic preferences dictated by the court were assigned to the hands of foreign artists (either French or Italian), these three figures were capable of assimilating the new trends and ideas and of playing a significant role in the founding of the Academia in Madrid. 1

After an initial training with his father, who died in 1727, Luis must have continued his studies with one of the Madrid masters who continued the decorative tradition brought to Spain by Luca Giordano, such as Francisco Llamas or Antonio Palomino. It has even been suggested that he could have been a student of Giacomo Bonavía, working under him at the Buen Retiro. 2 What is clear is that from the time of his first known works from the late 1730s and early 1740s, such as the decoration of the chapel of Saint Teresa in the former church of San Hermenegildo (Madrid) and the frescoes for the church of Nuestra Señora de la Soledad in Puebla de Montalbán (Toledo), 3 or in mature creations such as the fictive painted altarpiece in San Ildefonso in Toledo (fig. 1), 4 and the frescoes for the presbytery of Santos Justo y Pastor (Madrid) executed in collaboration with his brothers, 5 Luis González Velázquez reveals both a knowledge of the theory, geometry and mathematics required for the execution of fictive architecture and a stylistic dependence that connect him to Bonavía and the painters of his circle, such as Bartolomé Rusca, Félix Fedeli and Giovanni Battista Galluzi. The above works demonstrate an interest and certain mastery of fictive, painted architecture, with a use of concave-convex elements and trompe l’oeil that allowed the artist to assume a prominent position within the field of quadratura in the first two thirds of the 18th century in Spain. Luis’s skills would lead him to be named the fourth best painter in Madrid while in 1752 he would be designated an “individual of merit” by the Academia de San Fernando and in 1758 he received the maximum professional recognition with his appointment as Court Painter. 6 He obtained the latter post through a report that he sent to the monarch in which he detailed the large number of works that he had executed for him and drew attention to the recommendation of Corrado Giaquinto, who similarly sent a report praising the work that Luis González Velázquez had produced under his supervision at the Convento de las Salesas Reales. 7 Following Giaquinto’s arrival in Spain Luis’s work would more clearly reveal the influence of his work with its soft colours and dazzling Rococo forms.

The present drawing is a project for fictive decoration in which Luis González Velázquez reveals his profound knowledge of architecture, evident in the depiction of the Ionic order over a pilaster of a relatively orthodox type. Taking this element as the principal axis, the artist first presents a double solution for concealing the windows on the left side of the sheet, both of a Rococo style due to the presence of curves and counter-curves and the excess of decorative elements. Secondly, he includes a continuous gallery of statues beneath the entablature, set in niches and crowned by an armorial device in the manner of an emblem that reinforces their meaning. The delicacy and crispness of the drawing, the use of different inks to add a note of polychromy and the fact that the drawing is signed and dated 1748 suggest that this is a presentation drawing which would have been made to show to the patron for approval. The iconography employed in this design, which includes a depiction of a figure of Abundance holding a fruit-filled cornucopia in her left hand, and the presence above this figure of an emblematic device that includes a rake, suggests that this is a preliminary drawing for a decoration of a secular type. Within González Velázquez’s extensive output most of his works of a non-religious type were made for the court. As the artist himself noted in the above-mentioned report, 8 in 1733 he was commissioned to paint the fresco decoration of the monarchs’ bedroom in the old Alcázar in Madrid, a work destroyed in the fire of 1734. Subsequently, and throughout the 1740s he worked on the orders of Giacomo Bonavía on a range of projects for the Buen Retiro palace, the principal royal residence in Madrid following the fire at the Alcázar. There he was involved in the decoration of the Coliseo, the apartments of the Marquis of Scotti and the Infante Cardinal, the so-called Garden of France, 9 the King and Queen’s chamber, 10 and even produced set designs for operas and plays, a facet of his work recorded in two designs now in the Biblioteca Nacional (Dib/14/47/18 and fig. 2). Projects of this kind were intended to give the palace a more modern, fully Rococo appearance. Sadly, with the disappearance of the building in the 19th century nothing has survived to provide information on the appearance of the decorations for its rooms except for the projects and preparatory drawings for these spaces.