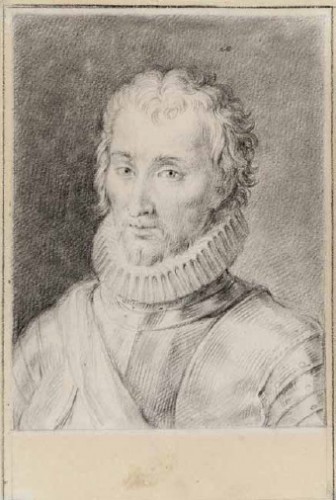 In 1793 Mariano Salvador Maella, by that date an artist fully established both at court and at the Academia de Bellas Artes de San Fernando in Madrid, received the commission to produce various proposals to illustrate the frontispiece of the book by Juan Bautista Muñoz (1745-1799) Historia del Nuevo Mundo. Muñoz, a professor of philosophy and logic at the University of Valencia, had been made chief cosmographer to the Indies in 1770. He was commissioned by the Spanish monarch to produce a general history of South America that would correct the inaccuracies present in two works published in the 1770s on the Spanish conquest of that region, namely those by Guillaume-Thomas Raynal 1 and William Robertson. 2

Maella presented three options for the project. The first was an Allegory of Christopher Columbus (fig. 1, Madrid, Real Academia de Historia, Fondo Juan Bautista Muñoz, vol. II, fols. 43-44), 3 in which the bust of the navigator is dignified with a laurel wreath held by a small angel who has a trumpet in reference to Fame in its other hand. At the base of Columbus’s image is a female figure holding a nautical chart and at her feet a book, a terrestrial globe and an anchor, referring to Columbus’s maritime explorations. Terminating the composition behind the sculptural bust are two columns with the motto Plus Ultra, an allusion to Hercules and the mythical origins of Hispania. This first option was rejected by the author, who only wanted “[…] to tell the simple truth without recourse to fiction or embellishment”, 4 meaning that as a front cover illustration, Maella’s composition did not reflect the principle of historical truth to which he aspired.

The second of the drawings presented by Maella and rejected by Muñoz was a Portrait of Columbus set in a tondo surrounded by a laurel wreath, in another allusion to Fame (Madrid, Real Academia de la Historia, Fondo Juan Bautista Muñoz, vol. II, fols. 43-44). 5 The motif is crowned by a bow in the manner of a medal and is comparable to the artist’s invention for his portrait of Sallust to illustrate The Catiline Conspiracy published by Ibarra in 1772. Like the previous proposal, Maella’s design is inspired by models from the classical antiquity so in vogue in artistic circles at this period.

The last of Maella’s proposals is the present work, which offers a direct, simple portrait of Christopher Columbus. Wearing armour and a ruff, his features and clothing are the same as those in the earlier drawings but here the artist omits any reference to fame or glory, thus coming closer to the author’s idea of objectivity, as a consequence of which it was the design selected for the book. As Muñoz himself indicated in the prologue to his text, Columbus’s appearance was based on the portrait: “in the house of his Excellency the Duke of Wervick [sic] and Liria, a descendant of our hero; a life-size figure seemingly painted in the last century by an average copyist, but which reveals signs of the hand of Antonio del Rincon, a celebrated painter of the Catholic Kings. The indications provided by Fernando Colon regarding his father’s face have been used to select the closest image, and to correct the defects evident in some features or misunderstood by the artist, or disfigured by the effects of time.” 6 Thus, despite later criticisms by scholars such as Valentín Carderera, who considered that the image showed Columbus as too young and “with a moustache, ruff and other inconsistencies in the face and clothing”, Muñoz aimed to secure the closest and most lifelike depiction possible of Columbus’s features, 7 once again revealing his typically Enlightenment desire for veracity in both the information included in his book and the iconography of its subject.

After this proposal was accepted by Muñoz the drawing was sent to the engraver Fernando Selma (1752-1810) to be reproduced on copperplate. The drawing, which is highly finished and executed with the precise lines typical of Maella, was thus transformed into an engraving in which Columbus lost some of the affability of his gaze and in which his arms are clad in a shirt rather than an armour (fig. 2, Biblioteca Nacional, sign. IH/2151/14/1). 8 Until recently only Selma’s print that was used as the frontispiece for Juan Bautista Muñoz’s Historia del Nuevo Mundo was known, for which reason the presentation of this previously unpublished drawing completes the group of three works presented by Maella for that ambitious historical study.