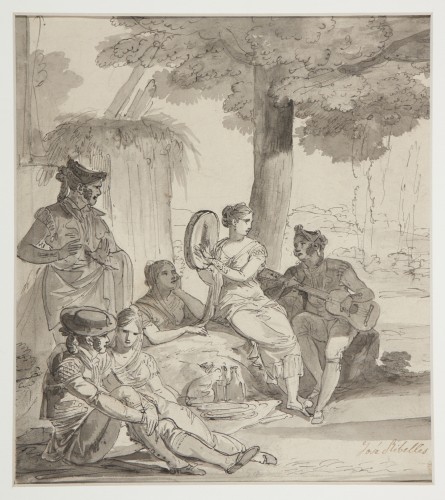 Majos in a Garden

José Ribelles was born in Valencia on 20 May 1778. He first trained as a painter with his father, the painter of the same name. Having learned the rudiments of the art he enrolled in the Academia de San Carlos in Valencia, where he was a pupil of Vicente López. In 1798 Ribelles won the First Class Prize at the Academia and one year later moved to Madrid to continue his studies at the Academia de Bellas Artes de San Fernando.

In 1799, shortly after his arrival, he was awarded a Second Class Prize for his canvas The Continence of Scipio (Madrid, Real Academia de Bellas Artes de San Fernando). This success introduced him into court circles and he made contacts with painters of the status of Goya, with whom he became on good terms. During the French occupation of Spain, Ribelles joined the Santa Julia Masonic lodge, becoming a Master. Following the return to the throne of Ferdinand VII, this activity brought the artist into conflict with the Inquisition, but he avoided punishment by freely admitting his association with the Masons. In 1818, having re-established himself in court circles, Ribelles was appointed an Academician of San Fernando, while the support of the Infante Carlos María Isidro resulted in his appointment as Deputy Director of the Academia’s school of drawing for young girls, located on the street Fuencarral. That same year he petitioned the King to appoint him Court Painter, obtaining this position on 16 February 18191. Ribelles was extremely active during this period, producing frescoes, drawings, designs for stage sets and oil paintings. He painted frescoes for the Royal palace of Madrid, for Vista Alegre and for the Caños del Peral, de la Cruz and Príncipe theatres2. Ribelles was also notably prolific as a draughtsman. He produced the preliminary drawings for various prints for the 1819 edition of Don Quixote3, a large number of drawings on the War of Independence, and a complete series of 112 prints of the traditional costumes of the provinces of Spain, dated 18324. His activities as a set designer are a particularly important facet of his career, and Ribelles achieved great renown in the theatrical world of the day. He designed the sets for Pelayo, the Devil Preacher, and Federico II, both extremely popular plays of the time. Finally, with regard to his work in oil, Ribelles worked in a style mid-way between the classicism of academic landscape, in the manner of Fernando Brambilla, and a Goyesque mode for his portraits. Among his best works are the Portrait of the Poet Quintana (Madrid, Prado Museum), and that of the actor Isidro Máiquez (Madrid, Lazaro Galdiano Museum). His finest landscapes include The Large Lake in the Retiro and its Landing Stage (Madrid, Prado Museum). Ribelles died in Madrid on 16 March 1835 and was buried in a niche in the Puerta del Fuencarral cemetery5.

The present drawing depicts various majos in a garden. The composition is set in a leafy landscape and includes a number of figures; and focuses around the woman playing the tambourine. Her figure is emphasised both through its prominent location within the composition and by the white light that envelops it. On her right a majo plays the guitar while on her left a man and a woman enjoy the music and in the lower part of the scene a flirting couple exchange confidences. The drawing is executed in a notably detailed manner through the use of fine pencil lines that create the outlines, to which judiciously applied areas of wash model the light and shadow. Overall, the image is clearly influenced by the genre scenes that José del Castillo, Ramón and Francisco Bayeu and above all Goya painted as cartoons for the tapestries woven by the Royal Santa Barbara Manufactory in Madrid. Ribelles reflects the popular world of galanterie and of majos and majas that Goya so brilliantly depicted in many of his cartoons, including Majo with a Guitar and The Parasol (both Madrid, Prado Museum). However, Ribelles’ figures are imbued with a sense of harmonious classicism and an elegance that makes them seem closer to classical sculptures than to popular figures from contemporary Spanish culture. On the surface, their clothes and appearance bring them closer to the image established by Goya but the overall mood of the work is quite different. Ribelles thus adapted a new and popular subject to his own classicising manner, but in doing so lost the sense of vividness and real life that characterises Goya’s works of this type. The serene, academic classicism of this drawing, which is close to academic studies of classical sculpture, suggests that the composition dates from the late 18th century and thus has little to do with the expressivity and the use of genre detail to be found in the artist’s series of regional costumes, which was one of his last works.

[1] Extensive information on the petition to the monarch regarding this appointment and its implementation is to be found in Barrio Moya, José Luis, “Aportaciones a la biografía del pintor valenciano José Ribelles y Helip” in Archivo de Arte valenciano, no. 76, 1995, pp. 164-166.