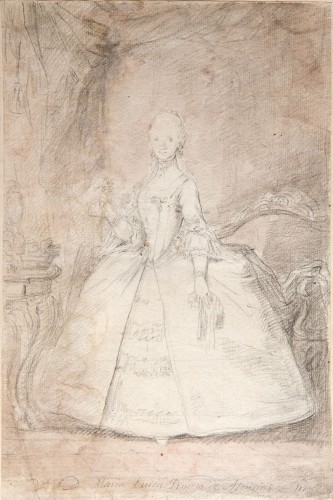 Princess Maria Luisa of Parma was born in 1751 to Philip of Parma, son of Philip V of Spain, and Luisa Isabel of Bourbon, daughter of Louis XV of France. In September 1765 and aged just thirteen, she married her cousin Charles of Bourbon in the palace of La Granja de San Ildefonso. At that date Charles was Prince of Asturias and thus heir to the Spanish throne. Soon after that event the future monarchs were portrayed in the form of two pairs of canvases by Anton Raphael Mengs, first court painter to Charles III, with the aim of disseminating the young couple’s appearance. Surviving from those early works by Mengs are the three-quarter-length versions in the collection of the Museo del Prado, on deposit with the Palacio Real in Aranjuez (MNP, P-002188, and P-002189). They depict Charles Anthony of Bourbon in hunting dress and Maria Luisa of Parma in court dress, the latter set in a landscape which appears to be the gardens at Aranjuez (fig. 1). 1

Mengs also produced two full-length portraits of the Prince and Princess of Asturias but these are unfortunately lost. They were used as models by artists in his studio for portraits that disseminated the images of the royal couple, among them Mariano Salvador Maella, who in 1765 had returned to the court from a period in Rome in order to join the royal studio directed by Mengs. 2 From that moment on he became the Bohemian artist’s principal assistant, acquiring increasing prestige at court which led to his appointment as painter to the king in 1774. 3 One year after that appointment Maella was commissioned to copy Mengs’s full-length portraits of the Prince and Princess in order for them to be sent to the portrait gallery of the Russian Empress Catherine the Great at the palace of Chesmensky near Saint Petersburg. 4 There was a subsequent commission in 1780 for a second delivery of portraits of Charles III, the King and Queen of Naples, and the Prince and Princess of Asturias, also by Maella. Of these, the portraits of Charles III and of the Prince and Princess of Asturias, Charles of Bourbon and Maria Luisa of Parma, are now in the Hermitage (inv. nos. GE-4474, GE-4433, and GE-4591, fig. 2). 5

In the canvas the Princess of Asturias appears as she does in Mengs’s original three-quarter-length model, but now depicted full-length. Furthermore, rather than standing before a balustrade in a garden, Maria Luisa is shown in a palace interior, in front of a red velvet sofa and with a side table to her right with flowers and a clock on it. This setting is similar to the one to be seen in the portrait which the Lyons-born painter Laurent Pecheux executed to mark her marriage to Charles of Bourbon (New York, Metropolitan Museum of Art, inv. no. 26.260.9). The present drawing is a combination of the two images with the only notable difference being the handkerchief in the sitter’s left hand rather than the closed fan to be seen in the Prado and Hermitage versions. Maella’s drawing is executed with great skill and agility, making use of rapid strokes of pencil that are extremely schematic in some elements, such as the background setting, and with the application of a very diluted sepia wash that differentiates the figure from the setting. This sketch was attributed by various experts to Mengs and was thought to be preparatory for the full-length painting that he executed on the arrival of the Princess in Spain. 6 However, in 2009 it was correctly attributed to Maella and has thus joined the corpus of more than 400 known drawings by this Valencian artist. 7