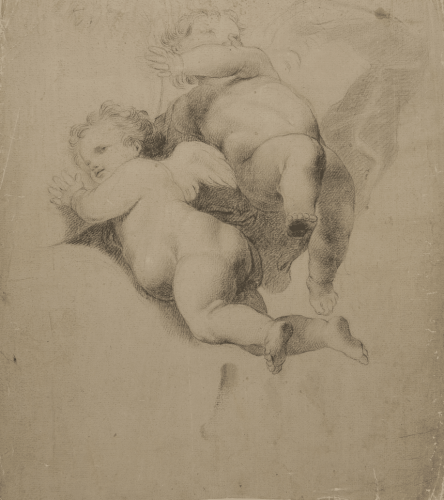 Flying Angels holding up the Orb

By the year 1773 Maella was one of the best and most esteemed Spanish painters of the day together with Francisco Bayeu. He had achieved a status almost comparable to that of his mentor Bayeu and had thus petitioned Charles III to appoint him painter to the Royal Chamber. 1 At this date, almost at the height of Maella’s career, the Archbishop and Cardinal Primate of Toledo, Francisco Antonio Lorenzana, asked the King’s permission for both Maella and Bayeu to work in Toledo cathedral on the renewal of its decoration, the most important project of this type undertaken during the Spanish Enlightenment. 2 The intended decoration included not just a series of fresco paintings for the cathedral’s cloister but also the paintings for the room known as the Octagon and the entire decoration of the chapel of the New Kings.

Between 1774 and 1776 Maella worked on the paintings for the cloister, painting various scenes for the Saint Leocadia cycle. During the same period, in November 1775, it is recorded that, “he is preparing the scaffolding in the Octagon, which as it is a smaller space he says he can use the time that is not easy for him to employ in the cloister.” 3 Designed by various architects in the late 16th century, the Octagon of Toledo cathedral took the form of an architectural reliquary. 4 Between 1667 and 1671 it was decorated in fresco by Francisco Rizi and Juan Carreño de Miranda, 5 but the room was affected by damp and by the time of Cardinal Lorenzana the paintings had deteriorated so seriously that it was decided to replace them. In order to ensure that the new decoration did not suffer from the same problem the exterior of the Octagon was clad with lead to avoid water and damp seeping in. 6 The subject of the decorative programme chosen for this space was the same as the previous one, The Assumption of the Virgin (fig. 1). 7 The description of the work commissioned from Rizi and Carreño is extremely close to the iconography also depicted by Maella for this room: “[…] firstly they must paint the lantern and dome of the new chapel of the holy relics of the said holy church, painting the celestial glory and in it the Holy Trinity crowning the Holy Mary above choirs of dominions, powers, cherubim, seraphim and the other hierarchies of angels which will occupy the highest parts of the place as musical choirs – and the lowest part of the dome will be decorated with patriarchs, apostles and the grandparents of Our Lady, emphasising opposite Our Lady the Saint King David with his harp shown dancing before the ark which also has to be included as being a prefiguration of Our Lady and an attribute.” 8 Due to the composition’s very large size and the numerous figures that Maella had to paint he remained in Toledo until October 1778. It is definitely known that on 19 November of that year he had already finished painting the Octagon and that the marbles and bronzes in the room had subsequently been cleaned. 9 Due to the complex nature of the fresco Maella produced various preparatory works, both on canvas and on paper, in order to study the space and the figures. 10 The present, exquisite drawing can now be added to the list of previously known studies. It depicts two infant angels in flight, holding up the orb on which God the Father – located on the Virgin’s right – is leaning (fig. 2). The figures and technique in this sketch are extremely characteristic of Maella, for example the use of a sheet of paper prepared with a light, greyish wash on which he drew the forms of the angels in black chalk. With their chubby, infant bodies, the faces of these figures and the careful treatment of the shadows are comparable to those to be seen in other drawings of angels by the artist, for example the Allegory of Religion in the Museo Lázaro Galdiano (inv. no. IM8812) or Angels bearing Lilies and a Mirror in the Museo Cerralbo (inv. nos. 04775 and 04778).

Maella’s efforts with the fresco earned their reward and on 7 April 1779 he was paid the very significant amount of 75,000 reales for his work. 11 While it has on occasions been suggested that all the artist did with regard to the Octagon’s dome was repaint the frescoes already executed by Carreño and Rizi, this newly presented sketch and other previously known ones clearly reveal Maella’s laborious preparatory work. While he had a pre-established iconography on which to base himself he was nonetheless obliged to devise a large number of figures and thus give form to a completely new composition.