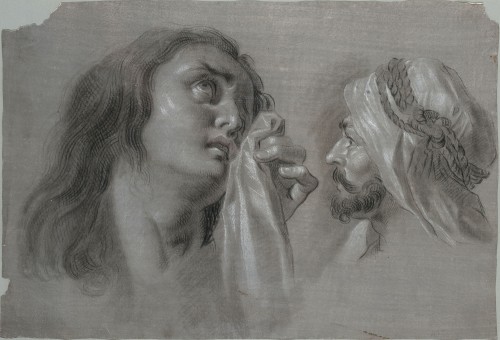 Careful study of the human figure, its characteristics, expressions and the light and shadow surrounding it, was one of the bases of 18th-century academicism. Before embarking on a painting, students at the fine arts academies of that period had first to study each of the figures that would form part of the whole, leaving no line or stroke to chance. Initially working in chalk on paper then transferring the designs to small canvases, this process gave rise to the finished painting. This detailed procedure became ingrained in the habits of numerous students, who continued to use it during their careers as mature artists. One example is Zacarías González Velázquez, the artist who created these two drawings. Having first trained with his brother-in-law Mariano Salvador Maella, González Velázquez then entered the Academia de Bellas Artes de San Fernando in Madrid in 1777 of which his father, the painter Antonio González Velázquez, was director. After completing his training Zacarías was made an academician in 1790, and would eventually become the director himself between 1828 and 1831. 1

González Velázquez worked in the service of the Spanish court, executing frescoes for royal residences such as El Pardo and the Casa del Labrador in Aranjuez, combining these activities with commissions for religious works for destinations across Spain. He thus painted alongside Goya in the Santa Cueva in Cadiz, for Toledo Cathedral, the Oratorio del Caballero de Gracia in Madrid, the cloister of the church of San Francisco el Grande, also in Madrid, and the Sacristy of Jaen cathedral.

For the latter commission the artist was required to paint the two canvases for the side altars, depicting The Crucifixion and The Martyrdom of Saint Pedro Pascual, while Mariano Salvador Maella was selected to execute the oil painting for the high altar, depicting The Assumption of the Virgin. 2 The Sacristy, designed by Ventura Rodríguez (1717-1785), was begun in 1764 and was in the final stages of decoration by 1791. In 1792, after Rodríguez’s death, the director of works, Manuel Martín Rodríguez, was responsible for selecting the subjects for the canvases and the artists. One year later, in 1793, González Velázquez had completed his commission, for which he would be paid a total of 28,000 reales. 3

Both canvases are extremely large in size, measuring 410 x 228 cm. Although painted in a short space of time they are carefully prepared and devised compositions. This is evident both in the present drawing, which is a detail of Mary Magdalen in the scene of The Crucifixion, and of the head of an Arab from The Martyrdom of Saint Pedro Pascual, and in various oil sketches in different collections that depict the two final compositions. 4 Certain changes are evident between the oil sketches and the final works. For example, in the preparatory oil sketch for The Crucifixion (fig. 1), the Virgin and Mary Magdalen sadly observe the dead Christ while Saint John is depicted weeping. However, in the final canvas the two women are weeping while Saint John looks at Christ with a sorrowful gaze. These changes point to the fact that the changes that González Velázquez made to his works were more expressive than compositional in nature. This is what makes the present drawing particularly interesting, in which the artist analyses two figures that are secondary in the canvases but on which much of the drama of the final paintings rests.

Both figures are executed with a firm, smooth line, with strong shadowing created from cross- or parallel hatching and with the highlights delicately indicated with lead white. The result is a superb, confident, academicist drawing which the artist used to give detailed form to the figures before transferring them to the final canvas. So exhaustive is the study of them that these figures lose something of their freshness in the final work and have a slightly cold air. Nonetheless, the artist’s satisfaction with the two canvases must have been considerable as when he applied for the post of Painter to the Privy Chamber in 1798, González Velázquez referred to them as among his most admirable creations. 5 Three years later, in 1801, Charles IV made him honorary Painter to the Privy Chamber, which allowed González Velázquez to join the ranks of the most important artists of the day.