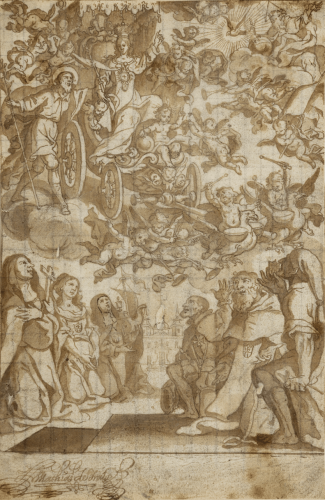 Allegory of the Order of the Blessed Virgin Mary of Mercy

Friar Matías de Irala was one of the principal disseminators of Spanish Baroque ornamental models. Born in Madrid and descended from an illustrious family, 1 he devoted himself to drawing from a very young age without any instruction, copying foreign engravings. At the age of twenty-four Irala entered the Franciscan Minorites of Saint Francis of Paula as a lay brother in the now defunct monastery of the Victoria on the Carrera de San Jerónimo in Madrid. Once his gifts for drawing and engraving were appreciated he was relieved of his monastic obligations and spent the following years teaching, drawing and producing prints. Only a few canvases by Irala’s hand have survived, including Saint Francis Xavier in the parish church in Navarrete, La Rioja; 2 a few drawings, many of them preparatory designs for prints, such as Decorative border for the front cover of a book in the Museo del Prado (fig. 1); and principally, a large number of individual prints and book illustrations. The latter include the illustrations for various medical treatises such as the Anatomía completa del hombre by Martín Martínez of 1728, the Theatro Chyrurgico Anatómico del cuerpo del hombre viviente of 1729 by Francisco Suárez, and a series of prints published to illustrate a drawing manual with the title Método sucinto y compendioso en cinco simetrías apropriadas a los cinco órdenes de arquitectura con otras reglas útiles, which was produced both as an intended repertoire for painters’ studios and for private students. Despite being a well-established and recognised engraver, in 1753, the year of his death, Irala enrolled to study engraving at the Real Academia de Bellas Artes de San Fernando, 3 offering proof of his humility and desire to continue learning and improving.

Irala’s style, which was exuberant, decorative, florid and dynamic, is evident in works filled with ornamental details and compositional diagonals and was considered by many to be Rococo. This is clearly evident in the present drawing, which is a paradigmatic one within his output. Its complex and extremely detailed iconography represents the Allegory of the Order of the Blessed Virgin Mary of Mercy, in which the most important saints of the Mercedarian Order are shown praising and venerating the triumphal figure of the Virgin.

The composition, which is notably Baroque due to the movement of the figures and the large number of them, is divided into two levels. The upper part of the drawing is occupied by the celestial realm presided over by the figure of the Virgin of Mercy, shown crowned, dressed in a white habit and with a scapular at her breast. Her face is identical to that of the Virgin in the engraved image of Mary of the Holy Sacrament executed by Irala around 1734 (fig. 2), which allows for an approximate dating of this drawing. In the present work the Virgin is seated on a chariot of the type used to convey holy images in public processions, thus acclaiming her triumph. It is notably similar to the one now in the church of Nuestra Señora de la Concepción in Navalcarnero, designed by Mateo de Medina in 1757 and based on the repertoire of forms found in Plate 25 of Irala’s Método sucinto. 4 Seated at the front of the chariot is the Christ Child, blessing and holding the terrestrial orb. The vehicle is pulled along by two eagles with two small angels above them playing drums, the latter extremely comparable to those in the upper part of the Border in the Prado (see fig. 1). Our Lady of Mercy is accompanied on her right by Saint Joseph with his flowering staff, and at the upper right corner by God the Father and the Holy Spirit, completing this triumphal image of the Virgin as the Queen of Heaven. Located on clouds, both Mary and Joseph are completely surrounded by angels with trumpets, violins, banderoles or simply accompanying them and adding life to the principal scene. One of these angels approaches the Christ Child and offers him bread and a bunch of grapes in a direct reference to the Eucharist.

The earthly realm is depicted in the lower part of the drawing. Here a number of the most important members of the Mercederian Order are shown kneeling and in parallel diagonals, with women on the left and men on the right. On the left side the two women nearest to the viewer could be Saint Colagia, one of the companions who helped Saint Mary of Cervellon found the female branch of this Order and the mother of Saint Ramón Nonato, suggested by the fact that she is shown as a secular figure with the Mercedarian emblem at her breast and also as pregnant, as indicated by the fall of her clothing over her stomach. In the background is Saint Mary of Cervellon holding a caravel in reference to her intercession at sea. On the right and opposite her is Saint Serapion, a soldier who took part in the Crusades, hence the crusaders’ cross at his breast. Immediately next to this figure, in the centre, is Saint Peter Nolasco, founder of the Mercedarian Order, and finally, almost with his back to the viewer, is a man wearing a typical Catalan cap who is kissing the Order’s emblem. He could be Saint Ramón Nonato, who was a shepherd in the Solsona area, or he might be a devout lay figure. 5 In the background of the composition and acting as the vanishing point for the two diagonals created by the saints is the façade of a church. It has a dome and two flanking towers with steeples. Given that its architectural design does not seem to correspond to any known church of the Mercedarian Order, it could perhaps refer to the heavenly Jerusalem.

The precise, highly finished definition of this drawing is achieved through crisp lines of sepia ink and washes which create the sensation of different tones and shadows in the composition. The sheet of paper is entirely squared up in black chalk to allow the artist to transfer it more easily to another support, probably indicating that it was intended for a painting, given that in the case of his drawings intended for prints, Irala transferred them using pouncing, as can be seen in fig. 1. As Gutiérrez Pastor has observed, the first half of the 18th century in Madrid saw the decoration of the convent of the Barefoot Mercedarians of Don Juan de Góngora, and the present drawing may be a design for one of the altar paintings for the church, a project in which Matías de Irala seems to have been involved. 6