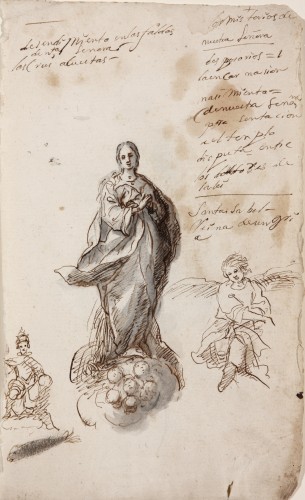 The Immaculate Conception, Saint Ferdinand and a seated Angel

Pedro Duque Cornejo belonged to a large and important family of Andalusian Baroque artists. His father was the sculptor José Felipe Duque Cornejo and his mother was the painter Francisca Roldán, daughter of the sculptor Pedro Roldán. Pedro Duque Cornejo principally trained as a sculptor in his grandfather’s studio, which was one of the most active in Seville in the last quarter of the 17th century. Working there were artists of the stature of his aunt, Luisa Roldán, and it was in that context that he learned all the skills of sculpture, painting and the polychromy of carved wooden images. He subsequently trained in the architectural design of altarpieces with Jerónimo Balbás in Seville and Francisco Hurtado Izquierdo in Granada. Duque Cornejo’s artistic activities principally took place between in those two cities and in Cordoba, where he spent his final years. As an artist he is considered to represent the culmination of the Sevillian and Granadan school of sculpture. 1

The present drawing is extremely interesting as it allows us to see how the artist approached various different subjects on occasions. It includes three separate sketches for different figures. Firstly, the centre of the sheet is occupied by a highly worked figure of the Immaculate Conception, executed in pen and grey-brown ink with greyish wash. The Virgin’s volumetric figure stands on an orb of clouds and heads of cherubim, her hands joined in prayer and her gaze lowered. The only element that breaks with the solidity of the figure is her billowing mantle. On the left of the principal figure and on a much smaller scale is a half-kneeling efigie regia wearing a crown and holding an orb in his left hand. This figure can be identified as Saint Ferdinand. 2 It is much less finished than that of the Virgin and is rather a rapid, spontaneous sketch executed entirely in grey-brown ink. Finally, to the right of the Immaculate Virgin is an angel with outstretched wings. This motif is also sketchily drawn using rapid, zig-zagging strokes and solely in pen. It is slightly larger in scale than the figure on the left but is smaller than the principal image. Next to the three figures, at the top of the sheet and on the right, are a series of annotations that principally make reference to “los misterios de nuestra Señora” [The mysteries of Our Lady], referring to the episodes from the Marian cycle. The handwriting of these annotations is identical to that found on some autograph letters by the artist which are now in the Archivo Histórico Diocesano in Huelva. 3

With regard to the principal figure of the Virgin, Duque Cornejo produced an extremely large body of work on Marian subjects, particularly the Immaculate Conception. He executed numerous sculptures on this subject, as well as drawings that study the figure of Mary. The Metropolitan Museum of Art in New York has five of these sheets, all depicting her in different poses and with varying degrees of finish, indicating the range of compositions that the artist designed on this subject. 4 Some of the drawings reveal the influence of Murillo, such as the sketch in which the Virgin has her hands crossed on her breast (Metropolitan Museum, inv. no. 56.235.58), but the most direct reference for the Virgin with a tapering body of the type seen here (fig. 1, Metropolitan Museum, inv. no. 56.235.34) are those by Alonso Cano. 5 This has in fact led the present drawing to be attributed to his circle, 6 while many of Duque Cornejo’s sculptures have also been considered to be by Cano.

The angel would appear to be a sketch for one of the lamp-bearing angels that Duque Cornejo habitually included as flanking figures in his altarpieces. The position of the wings, right arm and legs specifically recalls those in the church of San Luis de los Franceses in Seville (fig. 2), which reinforces the suggested date for this drawing of between 1720 and 1730. The fluid, energetic technique of this work can be compared to the drawings in the Metropolitan of An Angel wearing a laurel Wreath and An Angel with a Palm Branch (inv. nos. 56.235.65 and 56.235.66).

The varying degrees of modelling of the figures, their differing scales and subjects and the annotations on the sheet suggest that this was a working drawing in which Duque Cornejo set down different ideas for his compositions. As such it is a valuable document that indicates how paper was valued as a scarce commodity and was often reused for the simultaneous study of different figures.