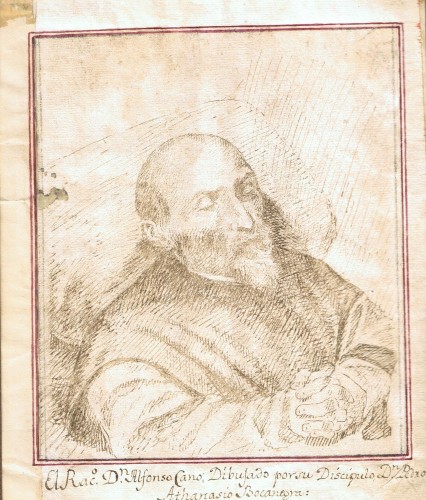 Portrait of Alonso Cano on his Deathbed

The physical depiction of individuals has been part of our culture since ancient times. The accurate depiction of human features had a specific aim, which was that of recording their memory for posterity. This preoccupation with being remembered was of particular interest to artists, particularly from the Renaissance onwards. Architects, painters and sculptors were portrayed by their pupils, friends and admirers with the intention of preserving their image for eternity. This is the case with the portraits of Caravaggio, Guercino and Guido Reni drawn in Italy by Ottavio Leoni during the first third of the 17th century, or the series designed and engraved in Flanders by Anthony van Dyck between 1628 and 1632. Within Spain the best example is undoubtedly the gallery of portraits of painters, musicians, poets and writers created by Francisco Pacheco, which is now in the Fundación Lázaro Galdiano in Madrid.

The present, unpublished drawing represents a further step in depictions of this type as it shows an artist on his deathbed. Alonso Cano on his Deathbed was drawn by his pupil Pedro Atanasio Bocanegra, as noted in the inscription at the bottom of the image. It is therefore an exceptional work and one that is unique within Spanish art of this date, only comparable with the supposed Portrait of the dead Velázquez attributed to Juan de Alfaro and now in the Fondation Custodia in Paris.

Alonso Cano is depicted three-quarter length, slightly propped up with his head resting on a pillow. He wears the liturgical vestments (alb, chasuble and maniple) that refer to his status as a prebendary of Granada Cathedral. The drawing has been squared up in pen and red ink, probably some time after it was created, and has an inscription at the bottom that reads: “El Racº. Dn. Alfonso Cano, Dibujado por su Discipulo Dn. Pedro/Athanasio Bocanegra:”.

This drawing was used as the preparatory sketch for a canvas on the same subject by Bocanegra now in the Museo de Bellas Artes in Seville. 1 The painting has an inscription on the back that reads “Original portrait of Alonzo Cano by the hand of Atanasio his pupil”. 2 It is extremely interesting to compare the two works as the drawing shows the location of the deceased sitter’s hands while this detail is incomplete in the painting, which only has the red preparatory layer onto which they would have been painted. It is clear that both drawing and painting should be dated immediately after Alonso Cano’s death in Granada on 3 September 1667.

A number of images of Alonso Cano have survived. In addition to the two discussed above, there is a portrait of the artist attributed to Juan de Sevilla in the Museo de Bellas Artes in Cadiz, another in a private Madrid collection, 3 and a third which may depict him by an anonymous 17th-century artist in the Museo Nacional del Prado (P-2830). 4

Pedro Atanasio Bocanegra was born in Granada in 1638 and was a pupil of Alonso Cano, Pedro Moya and Juan de Sevilla, who were the leading painters in the city at that time. His works reveal the influence of Cano in the soft but meticulously painted forms, particularly in his depictions of the Virgin and Child and the Immaculate Conception. However, Bocanegra’s works reveal an excessive dependence on prints and a weakness in the draughtsmanship, although he compensated for the latter by a graceful and harmonious colouring clearly derived from Van Dyck. Bocanegra’s career was entirely associated with his native Granada where he gained renown and the patronage of the aristocracy. Works executed in Granada over the course of his career include the decoration for the feast of Corpus Christi in 1661 and the series of paintings for the church of San Justo y Pastor, while in 1670 he was appointed Painter to the Cathedral. In 1686 the artist travelled to Seville then to Madrid to try his fortunes at court where he enjoyed the protection of Pedro de Toledo, Marquis of Mancera. This protection brought Bocanegra the commission to execute an Allegory of Justice for the Spanish monarch (Madrid, Real Academia de Bellas Artes de San Fernando) and to obtain the position of Court Painter ad honorem. 5 He died shortly after his return to Granada, just before which he was the subject of a portrait by the painter and architect Teodoro Ardemans (Granada, Palacio Arzobispal).

Very few drawings by Bocanegra have survived. The best known is possibly Saint Jerome with the Angel in the Uffizi. Executed in pen with thick, agitated lines, it reveals a complete dependence on models by Alonso Cano. 6 This is also the case with the Child Angels in the Musée du Louvre, which is signed and dated 1664 and is notably similar to another drawing on the same subject now in the Biblioteca Nacional de España.