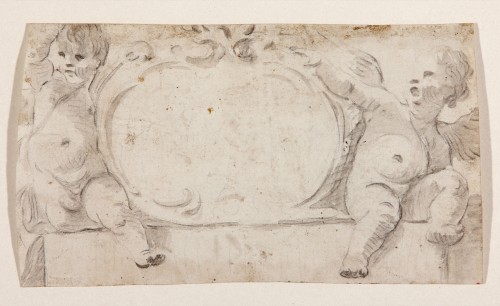 Born in Naples in 1634, his first biographers point out that he trained as an apprentice of Ribera, whose style he will imitate from the beginning. After these early studies he travels to Rome and Venice, where he will dedicate himself to studying the great masters, paying special attention to Pietro da Cortona. His work is very prolific to the extent that his contemporaries nicknamed him as “fa presto”, due to his way of quickly executing a painting. In his production outstand above all the fresco compositions that he dedicates himself to at the end of the 70´s. An example of these, earlier mural decorations are located in Saint Gregory Armeno (1679), the dome of the Corsini Chapel (1682) or the library of the Medici Riccardi Palace. Thanks to the fame acquired by these works he is claimed by the court of Spain by Charles II in 1692 to undertake the stairway and vault frescoes of the Basilica of San Lorenzo in El Escorial, one of his masterpieces. The king was so impressed with his mastery that he commissioned him to undertake the other decorations in the Alcázar, Aranjuez and in the Buen Retiro Palace, where he paints the Allegory of the Spanish Monarchy in the vault of the Casón. By intervention of the queen Mariana of Neoburg he is commissioned to paint in 1699, the decoration of the Madrilian church of Saint Anthony of the Portuguese. Philip V’s arrival to the throne of Spain in 1701, and the beginning of the War of Succession would mean the end of the royal orders, and thus will cause Giordano to return to Naples in 1702, where he dies in 1705.

This unpublished drawing depicts both putti sitting down on a stone podium while holding an oval piece decorated with the technique of rocalla. The work should be closely linked with the two drawings of Luca Giordano currently conserved in the National Library of Madrid and in the Galleria degli Uffizzi respectively[1]. Both designs, together with the drawing that is observed here, are sketches for the decoration of the dome´s ring of Saint Anthony of the Portuguese in Madrid, so they must be dated between 1699 and 1701. The picturesque decoration of the church is the result of a long process lasting for almost a century[2]. The temple´s construction is carried out between 1624 and 1633, but its fresco decoration does not commence until 1660. Although the initial designs for the architectural models are handed in by the Italian Angelo Michele Colonna, who came to Spain by Velázquez´s intervention to paint the fresco decorations in the Halls of the Alcázar of Madrid, it will be however the Spaniards, Juan de Miranda and Francisco Rizi who will finally undertake the design and work of the paintings. The last great intervention will be carried out, as previously seen, between 1699 and 1701, by Luca Giordano, responsible for “putting the final touches in many areas of the dome, in need of restoration from the decay of time, as for some openings that were recorded” according to the scholar Antonio Palomino[3]. Together with this work he also undertakes the decoration of the bottom walls with scenes of Saint Anthony of Padua’s life, and the dome’s ring, where he paints eight pairs of angels sustaining oval and eight-angled trays imitating bronze in which the history of the Portuguese saints’ lives are represented. These pairs of angels, as we have aforementioned, are directly linked to the drawings in Madrid and in Florence[4]. Likewise, the actual drawing appears to be conceived for that same decoration, and as in the previous case, there are details, movements or attitudes that allow its direct correlation with a group of putti in the fresco painting executed by Giordano. Nevertheless, it has proved to be obvious that these three drawings were conceived as preliminary studies for the same decoration. This is deduced from its extreme broadside format; from its point of view “sotto in sù” and the positioning of the figures on stone podiums sustaining oval and eight-angled pieces.