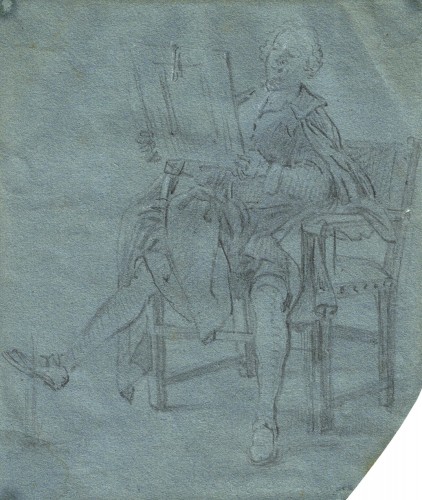 The change of dynasty in Spain at the outset of the 18th century had wide-ranging consequences that extended beyond the political. The ascent to the throne of the Bourbon monarch Philip V, grandson of Louis XIV, resulted in a new artistic situation in Spain. One of the most obvious manifestations of this change was evident in the field of portraiture, which adopted French stylistic traits from 1715 onwards. The figure of the French painter Michel Ange Houasse should be seen within this context (1680-1730). Houasse was the first foreign artist summoned to the new court in Madrid to paint portraits of the royal family, although prior to this there had been various efforts to create a new image of the monarch involving Spanish painters. The end of the Spanish War of Succession and the establishment of Bourbon rule in Spain marked a new phase in the concept of royal portraiture, which abandoned earlier Spanish models and focused on the royal French portraits that were so much to the taste of the new king. 1 Nonetheless, it would seem Houasse’s efforts did not entirely satisfy Philip, to the extent that in 1722 he summoned another French portraitist, Jean Ranc, to the Madrid court.

While Houasse was therefore replaced as official portraitist this did not mean that he was sidelined. He focused from the time of Ranc’s arrival on the depiction of views of the royal Spanish residences and in particular on the production of genre paintings that made him one of Philip V’s favourite artists to the point where the monarch kept Houasse’s small-format works in his private apartments in the Palace of La Granja. These scenes, which depict episodes everyday life, were inspired by Dutch paintings, particularly the work of Teniers, which Philip particularly liked, albeit reinterpreted as a consequence of Houasse’s French artistic background. They thus have an elegant sophistication that is evident in paintings such as Picnic in the Countryside, Landscape with Pilgrims, and Procession of Villagers (Patrimonio Nacional, Palacio Real de la Granja). 2

Until a few decades ago, and even more recently in the case of the present sheet, most of Houasse’s drawings were attributed to Francisco Bayeu. In her important study of 1968 Jutta Held re-attributed most of these sheets, almost all of which depict genre subjects, to Houasse. 3 As a result of her study and of subsequent ones it is now possible appreciate Houasse’s style as a draughtsman. Firstly, he used two types of paper, either white laid paper or granulated paper in tones of blue, green or warm browns. He generally used slightly oily black chalk and highlighted certain areas, at times extremely faintly. The motifs depicted range from sketches to complete figures, some of which are defined with strong lines but include few details while others are executed in a more careful, detailed manner. Thirdly, there is a group in which the figures are completely finished in great detail. All these drawings are preparatory studies for figures in Houasse’s genre paintings, with the exception of three: two studies of landscapes (Biblioteca Nacional de España and Museo Nacional del Prado) and one of a Study for an Armchair (Biblioteca Nacional). 4 Finally, the latter institution has Houasse’s only complete preparatory study for one of his paintings, the Game of Bowls (Patrimonio Nacional, Palacio Real de Madrid). 5

The present drawing depicts a seated figure in an armchair contentedly looking at what seems to be a painting. It is executed on blue paper in oily black chalk with very faint lead white chalk on the face and the frame, thus sharing the characteristics of the artist’s drawings referred to above. In addition, it can be related to one of his small genre paintings as it is a highly finished study for one of the figures in The Barber’s Shop (Patrimonio Nacional, Palacio Real de Madrid, inv. no. 10145134). This figure, to be seen on the right of the composition, is not in fact looking at a painting but rather at his own image in a mirror after having received the attentions of the barber. Another preparatory drawing for this painting exists, depicting A Woman picking up a Pitcher from the Ground (Madrid, BNE, Dib/13/4/85). 6

On the reverse of this sheet is a study of a building in ruins also executed in black chalk with white chalk highlights. The imprecise nature of this sketch makes it impossible to relate it to any known painting by Houasse, and it may be a study for a painting that was ultimately not executed or which has not survived. It can, however, be related to two studies of landscapes (Madrid, MNP, D-3901, and BNE, Dib/16/29/127), which again do not relate to any known work.

Finally, it should be mentioned that the present sheet was formerly in the Félix Boix collection and was included, with an attribution to Francisco Bayeu, in the exhibition Original Drawings held in Madrid in 1922 by the Sociedad Española de Amigos de Arte. 7 All trace of it was lost after that point until its reappearance in the present catalogue.

[7] Exposición de dibujos originales. 1750-1860. Catalogue-guide. Madrid, Sociedad Española de Amigos del Arte, 1922, pp. 27-28, no. 66. The catalogue, written by Félix Boix, describes the drawing in the following manner: “Looking at a painting: a man sitting in an armchair attentively examines a painting, which he holds in both hands. Black chalk with touches of white highlights on blue paper”. 0.157 wide; 0.186 high. Boix Coll.”