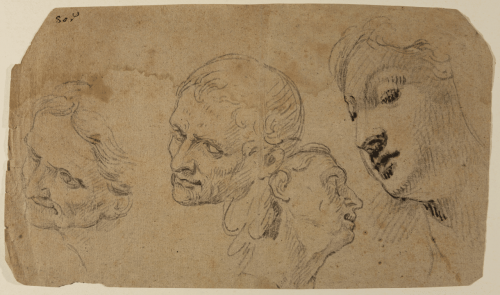 Study of Heads for the painting “The Holy Family with Saints”

Francisco Ignacio Ruiz de la Iglesia is one of the most interesting Madrid painters of the second half of the 17th century. Initially trained in Francisco Camilo’s workshop, he soon moved to that of Juan Carreño de Miranda, becoming one of his most notable and skilled followers. In 1679 Ruiz de la Iglesia took part in the creation of the decorations to mark the entry into Madrid of María Luisa de Orleans, Charles II’s first wife. It was at this point that he made contact with most of the court painters, particularly Claudio Coello (1642-1693), appointed Painter to the King in 1683, and José Jiménez Donoso (1632-1690). 1 The influence of the former would be evident throughout the early 1680s, particularly with regard to the composition and settings of Ruiz de la Iglesia’s works, although his style reveals a greater sobriety and formal restraint. Coello’s influence is most clearly evident, however, in his drawing, 2 both with regard to the direct style and pronounced lines and the careful study of compositions and figures evident in preliminary studies for the different elements to be used in his paintings. Ruiz de la Iglesia’s openness to the various trends in Madrid painting of this period is clearly visible in his works of the 1690s in which he once again looked to Carreño for some of his compositions, for example The Virgin giving the Rosary to Saint Dominic of ca.1690 (Venta de Baños, church of Santa Rosa de Lima). In other works he was influenced by the colouring and forms of the Neapolitan artist Luca Giordano who had arrived at court in 1692, evident, for example in The Last Supper in the Royal Palace at Aranjuez (inv. no. 10023062). 3 Ruiz de la Iglesia’s fine technique, particularly in his fresco paintings based on designs by Coello for the Chamber of Queen Mariana of Neuburg in the Buen Retiro palace, earned him the position of Painter to Charles II in 1689, 4 a position he maintained and expanded through further royal appointments under Philip V. 5

The present drawing is a paradigmatic example of the influence of Coello on Ruiz de la Iglesia in the early 1680s. This sheet of sketches of different heads was made in order to carefully study each of the elements in a composition. In this case the heads are those of the figures subsequently painted by the artist in The Holy Family with Saints (fig. 1). From left to right the artist analyses the expressions and faces of Saint Anne, Joachim, Elizabeth and the Virgin. The elderly Anne’s face, Joachim’s rough, weather-beaten one, Elizabeth’s proud expression and the Virgin’s gentle, classical features, once again influenced by Coello, are perfectly depicted through emphatic but minimal black chalk lines. Those used for the hair are undulating, those for the shadows are vertical or cross-hatched, while the outlines of the faces are created with a crisp, sharp technique. Ink is only employed to accentuate some heavily shadowed details, for example the Virgin’s lips. Both the expressivity and the position of the faces in the drawing are almost identical to the final canvas although the liveliness of the drawn line becomes more restrained in the creation of the final oil. There is another surviving study for the painting, for the figures of Saint Elizabeth and the Infant Saint John the Baptist, in the Real Academia de Bellas Artes de San Fernando (fig. 2). 6 Once again it reveals Ruiz de la Iglesia’s meticulous approach to elaborating his compositions.

As noted above, Coello (who was principal painter at the court of Charles II) influenced Ruiz de la Iglesia not only with regard to the practice of creating detailed studies for his works, but also with respect to their settings and compositions. Thus the setting of The Holy Family with Saints, comprising an architectural setting with a façade of monumental columns crowned by a balustrade and a staircase ornamented with stone balls, derive from works on a similar subject painted by Coello in the 1660s. These include The Virgin and Child adored by Saint Louis of France (Madrid, Museo Nacional del Prado, inv. no. P-000661) and The Virgin and Child among the Theological Virtues and Saints (Madrid, Museo Nacional del Prado, inv. no. P-000660). The architectural background plays a key role in all these works, giving them a sense of depth comparable to Veronese and assimilated from the contemplation of that artist’s works in the Spanish royal collection.