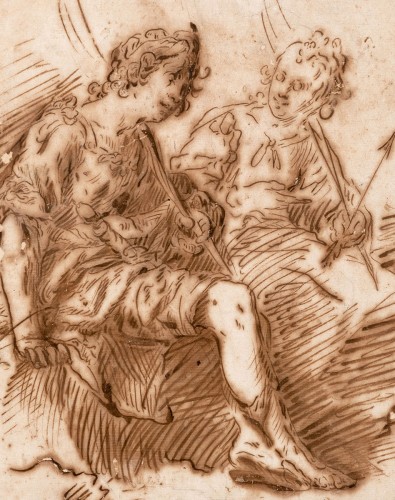 Saint Acisclus and Saint Victoria are the patron saints of the city of Cordoba. On 17 November 313 AD this brother and sister were tortured by Dion, the Roman prefect of the city, during the persecution of Christians ordered by the Emperor Diocletian. According to their hagiographic chronicle, Dion had them put into an oven but when he heard them singing he ordered them to be thrown, weighted with stones, into the Guadalquivir. However, they both floated to the surface unharmed. He then ordered them to be burned on a bonfire but this got out of control and various people died without the siblings being affected. He finally had Acisclus decapitated on the banks of the Guadalquivir while Victoria was shot with arrows in the Roman amphitheatre, resulting in both their deaths.[1] Their childhood servant collected their bodies and buried them near the river. According to Saint Elogius a basilica was built as a place of veneration to them and the remains of other martyred Christians were brought there. In order to protect those remains during the Almohad period they were sent to Saint Peter’s and concealed in the basilica’s columns. On 21 November 1575 an urn containing the saints’ remains was discovered during work on the foundations of the tower. This discovery took place shortly after the Council of Trent (1545-63), which sanctioned the worship of saints and their relics,[2] as a result of which the veneration of Acisclus and Victoria became widespread. The same period saw the rise of depictions of them for the decoration of chapels in large churches, as well as for smaller churches and private oratories. Given that this was a cult primarily associated with Cordoba it was local artists who most depicted the subject and who offered the widest variety of depictions of it. One example is Antonio del Castillo, a Cordovan painter and son of the little known Agustín del Castillo who was born in Llerena in Extremadura and whom Palomino described as “excellent”, stating that his son received his first training in art from him.[3] On the death of his father in 1626 Antonio del Castillo left for Seville where he continued his training in the studio of Francisco de Zurbarán. He returned to his native Cordoba in 1635 and became the leading painter there. Palomino states that he produced numerous works on the subject of the city’s patron saints, singling out the Saint Acisclus

which Castillo painted for the cathedral’s principal altar: “A gigantic figure which very well demonstrates the eminence of his skills due to it being majestically drawn and with great proportion and symmetry, and well rendered in the chiaroscuro.”[1] The painting was in fact rejected for that location and was then installed in the chapel of the Purísima (fig. 1). Castillo was also commissioned to paint the fresco of the cathedral’s Pardon Doorway for which he once again depicted the subject of the city’s two patron saints, a work that was extremely well received.[2] In addition, he produced lesser works, such as the two half-lengths of the same saints for the Hospital de la Consolación (present whereabouts unknown)[3] and the exquisite diptych of 1650 that was very probably commissioned for the convent of the Encarnación in Cordoba. In the mid-19th century it was in the collection of the Countess of Montijo and was subsequently auctioned at Sotheby’s in 2015 (fig. 2).[4]

All these works indicate the enormous demand for paintings of Cordoba’s patron saints and the consequent need to create new typologies which did not copy previous models in order to satisfy clients. The present drawing, which depicts the two saints seated and in conversation, can be located within the context of this quest for new prototypes. Each has the attributes of their martyrdom: an arrow in the case of Saint Victoria and a sword resting on his knee in the case of Saint Acisclus. To further assist in their identification, both hold their martyrs’ palms which rest on their left shoulders. The technique employed is typical of Castillo, who produced a large number of sketches of this type in which he often used a reed pen and grey-brown ink to add a sense of animation.[5] The type of free stroke typical of the artist, which brings movement and dynamism to the figures, is also present here, as is the characteristically rounded form of the eyes which is one of Castillo’s identifying traits. This drawing clearly confirms Palomino’s opinion when he stated that anyone in Cordoba who did not own works by Castillo could not be considered “a man of good taste.”[6]

[5] “On the Pardon Doorway, on the outside part, where the apostle saints Peter and Paul are located, [are] the holy martyr saints of Cordoba Acisclus and Victoria, and the Assumption of Our Lady, with Saint Michael and Saint Raphael on either side; all executed with such superior mastery and intelligence in the handling, and skills in the fresco; so that although it is now more than eighty years since they were painted they seem as fresh as if they had just been recently finished.” Palomino (1715-1724/1947), p. 950. The doorway as it appears now has undergone numerous modifications but there is a drawing for the project by the artist in the Museo de Bellas Artes de Córdoba (CE0875D). See García de la Torre (1997), pp. 96-99.

[8] According to Palomino: “Our Castillo was also extremely skilled at making drawings […] most of them in pen; and some (especially of old men) done with reed pens […] and with them he liked to draw large heads, with thick pen strokes, with great mastery and freedom.” Palomino (1715-1724/1947), p. 953.