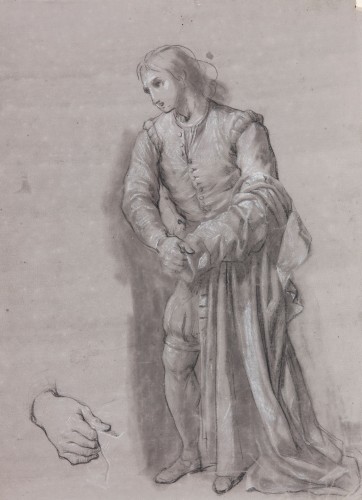 Zacarías González Velázquez was born in Madrid in 1763. His training begins under Mariano Salvador Maella, and in 1777 he enrolls at the Fine Arts Academy of  San Fernando, where his father Antonio González, also a painter, was the Director. After completing his training, he was appointed Academician of San Fernando in 1790, the institution where he held the position of director from 1828 to 1831, and in 1801 he is hired as the royal court painter. Settled in court, he undertakes fresco works of major importance in the royal palaces of El Pardo or in La Casita del Labrador of Aranjuez, where he depicts allegoric and mythological themes. He is also commissioned the religious paintings of the Santa Cueva de Cádiz, together with Goya, for the cathedral of Toledo, for the Oratory of the Caballero de Gracia of Madrid or for the cloister of the Church of San Francisco el Grande. His facet as a fresco painter is perfectly combined with that of a portrait painter, chronicling not only the Spanish royal family but also the most distinguished society of the era.  Among his most outstanding portraits are the ones that he does for King Ferdinand VII,  self-portraits and the paintings depicting the family members such as Antonio González Velázquez (Madrid, Prado Museum) or Manuela González Velázquez (Madrid, Lázaro Galdiano Museum). Zacarías died in Madrid in 1834, after some years of oblivion after dissociating himself from the Academy of San Fernando in 1831[1].

Of the twelve large-scale oil paintings done by González Velázquez eleven sketches painted in oil are conserved in the Lázaro Galdiano Museum of Madrid[2]. The one corresponding to the Birth of Saint Francis has been lost. The rest of the paintings of the series of San Francisco until completing the thirty-three for the decoration, are commissioned to other artists coetaneous to our artist such as Antonio Carnicero, José Camarón, each one completing six, and Manuel de la Cruz, that undertook nine.

The painting of Saint Francis giving his cape to a poor person conveys an episode narrated by San Buenaventura that describes the Saint as “adorned with precious clothings, he met a noble gentleman, poor and badly dressed. At the sight of that poverty, he was so touched by his compassive heart, that he immediately took off his clothing and dressed the poor person with them, achieving this way at the same time, a double act of compassion: to cover the disgrace of a noble gentleman and find a remedy for a poor person” (Major Legend of Saint Francis I-2). Our drawing is a sketch for the figure of Saint Francis. The saint is depicted standing up, slightly inclined, while he is taking off his cape. Richly dressed in the style of the 16th century, he wears a doublet and long socks. At the design’s bottom left angle, a study of the saint’s right hand appears, in which Zacarías González Velázquez analyses more precisely, the exact posture of the fingers grabbing the cape. Both the hand and the figure of the saint involves a whole academic study of the drawing. The perfection of the traces, shadows, the beauty of the shades, the arrangement of the light…. give a very clear idea of his academic training.

On the back of the drawing an academic study in red chalk appears, that depicts the lower torso of a nude man’s back, leaning his right knee on a rock. It could mean the artist’s first approach to the figure of the ragged poor person, since the work is dated in 1786, the same time in which he is working on the sketch for the Saint Francis one.