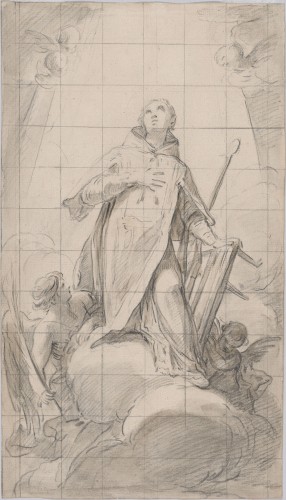 Saint Lawrence was one of the most important saints for the Spanish kings and the titular saint of not just the monastery founded by Philip II at El Escorial but also of a large number of churches and chapels across the whole of Spain. Depictions of Lawrence invariably include the gridiron on which he was martyred and which in the present sheet he holds in his right hand as a symbol of that episode. The fact that Lawrence is a martyr saint is emphasised by the youthful angel on his right who holds the traditional martyr’s palm. The direct presentation of the saint, located in the foreground and standing on a base of clouds, indicates that the drawing was associated with a painting for an altarpiece in an as yet unidentified church. 1 Furthermore, the fact that the image is squared-up indicates that it was the final design and was ready for transfer to canvas.

See the work in the Morgan Library Collection.

With regard to the composition, this sketch reveals similarities with Maella’s preparatory drawing for a canvas painted for the church of San Esteban in Valencia as a commission from Charles IV and depicting The Glorification of Saint Stephen (fig. 1, Barcelona, Museo Federic Marés, inv. no. 3019, on deposit with the Real Acadèmia Catalana de Belles Arts de Sant Jordi, inv. no. 963). 2 Both works have markedly ascending and pyramidal compositions, with the saints wearing dalmatics, located in the central foreground of the composition on a throne of clouds, flanked by child and youthful angels and raising their respective gazes to the heavens in an act of devotion. Maella replaced that design for the church of San Esteban with one that offers a more direct depiction of the saint’s martyrdom with various men stoning Stephen (Valencia, church of San Esteban Protomártir, lateral chapel), 3 for which reason it is possible that he reused the idea of the saint in glory for the subject of Saint Lawrence. This explains why the dating of the present sheet coincides with that of Saint Stephen, 1800-1802. It should be noted in this regard that Maella was an artist greatly in demand not only by the monarchy but also by private clients and numerous religious institutions, with the result that his oeuvre includes a large number of devotional works. Given the enormous number of compositions that he was obliged to elaborate, it is not surprising that he “recycled” his designs. However, two earlier chalk drawings of around 1780-90 show very comparable images of a Saint in glory (fig. 2, Madrid, Real Biblioteca, Álbumes de Fernando VII, vol. II, fol. 70, dib. 114, and fol. 68, dib. 110, respectively), suggesting that the artist repeated successful models when devising some of his commissions.

With regard to its technique, the present sheet is executed in black chalk with discreet touches of grey and sepia wash that emphasise the shadows. The chalk strokes are defined and precise for the lines that define the saint and the angels in the lower part of his throne of clouds, and less emphatic and more rapid in the definition of the setting. Thus the empty area above Lawrence’s head, framed by two zones of parallel, sloping lines where a group of small angels observes the scene, allows the white paper to play an important role and ensures a perfect depiction of the glory surrounding the saint through the use of this pictorial device.