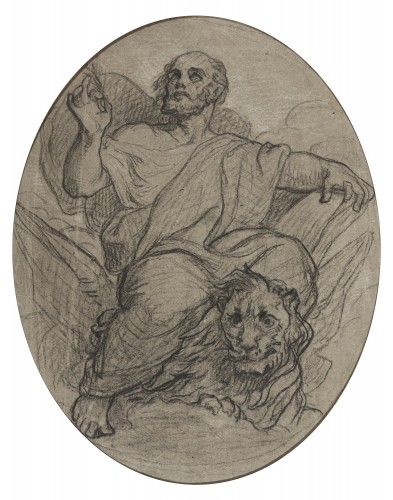 Eduardo Rosales was born in Madrid in the midst of a very humble family in 1836. Orphan when he was an adolescent, his beginnings in art were difficult. In 1857 he travels to Italy thanks to his friends Vicente Palmaroli and Luis Álvarez Catalá. In Rome he becomes fascinated by the works of the great Rennaissance masters. After two years of economical hardship in Italy, he obtains a pension to continue his studies. There, his works will become impregnated with academic formalism and the shades of the Nazarene painters. As an example is the work of Tobias and the Angel created in 1860 (Madrid, Prado Museum). His first great success was achieved in 1864 when he obtained the first medal in the National Exhibition for the painting Queen Isabel la Católica dictating her last will and Testament (Madrid, Prado Museum), a work that became a milestone in the history of Spanish painting, and that was also awarded in the Universal Exhibition of Paris in 1867. In the meantime, in Rome, he continues to work intensely. Proof of this is the considerable number of drawings and projects for works. His training is finally completed through several trips to Paris in 1865 and 1867. In 1868, after marrying Maximina Martínez de Pedrosa he settled permanently in Madrid. Commissions will begin pouring in from the aristocracy, as from the church and the state. His portraits will become widely renowned due to his alchemical power to transmute the knowledge obtained from the masterpieces of Velázquez and the sensuous colour of the Venetian paintings, creating a new language, completely personal. In 1871 he obtains the golden medal in the National Exhibition for the work The Death of Lucretia (Madrid, Prado Museum), even though his oil painting were not valued by everyone as a result of his innovative language by layering brush strokes in a vibrant manner. In these years his health was quite weak due to suffering from tuberculoses from 1856. He spends periods in the Pyrenees area of Aragon and the land of Murcia, where he is interested in landscapes and scenes of picturesque local customs, but his health does not improve. Before he became thirty-seven, Eduardo Rosales dies in Madrid, unable to enjoy his successful achievements and unable to occupy the positions he was appointed to: director of the Prado Museum, and director of the, recently founded, Spanish Academy in Rome.

One of the last commissions that were entrusted to Eduardo Rosales before his death was the decoration of the pendentives for the church of Saint Thomas in Madrid, devastated by a fire on April 13, 1872. The artist accepted the assignment with the intention of completing “in a couple of weeks each one [of the paintings] with energetic determination and hard work in order to make something grandiose and with good feeling, something I am fond of”[1]. Furthermore, the painter mentioned the characteristics of the work saying “they do not appear to be so big, one and a half life-size, and even if they are placed very high, by making very vigorous chiaroscuro, I believe that they will not go unnoticed… ¡Impressive figures could be done, remembering a little the Sixteenth Chapel”[2]. However, Rosales was never able to finish the paintings of the four evangelists Saint John, Saint Matthew, Saint Mark and Saint Lucas, each one meant to occupy a pendentive. The painter left unfinished two of the oil paintings corresponding to Saint John and Saint Mark (both in the Bishopric of Madrid-Alcalá)[3], of which his apprentice Francisco Sans Cabot, completed. The other two paintings Saint Mark and Saint Lucas (Madrid, Prado Museum) were entirely carried out by said apprentice[4]. The paintings were never installed in the place they were originally planned to be.

Pertaining to this unfinished series by Rosales are various preparatory drawings that are conserved. Some are simple sketches with light pencil traces, as the Evangelist of a private collection or from the Prado Museum (inv. no. D-5075)[5]; others are more elaborated sketches of the evangelists that are more clearly-defined, such as these two that are shown here and Saint Matthew of the Prado Museum (inv. no. D-5076)[6]; and others are real drawings completely defined and precise in the most pure tradition of mural painting, as Saint John and Saint Matthew of the Lorenzo García Vela Collection[7].

These drawings depict Saint Lucas and Saint Mark and are therefore preparatory of the two paintings that Rosales was unable to begin. These drawings were owned by Ricardo Donoso-Cortés y Mesonero-Romanos, and were published already by Pardo Canalís in 1987[8]. Done in pencil and crayon, they exhibit muscular and impressive figures, wishing to create something inspired by Michelangelo, and which perfectly link with the two paintings of the two other evangelists. He executed another sketch of the figure of Saint Lucas much quicker and more schematic that is conserved in the Prado Museum (inv. no. D-5076) which lacks the power of the figure dealt with here.  However, this is the only design that allows us to know how the painter intended to depict the figure of the evangelist Saint Mark. Therefore, the sketches are essential in order to know how Rosales had conceived the group of paintings for the Saint Thomas Church, since his apprentice Sans Cabot did not inspire himself on his master´s designs to carry out the ovals of these two evangelists.