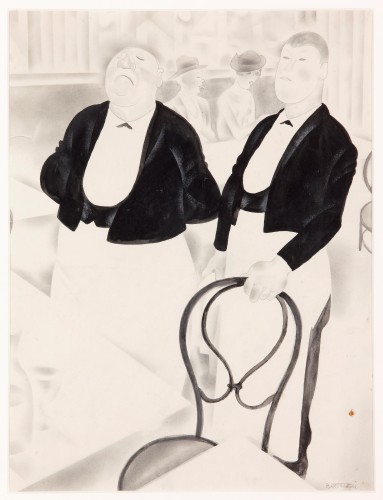 Salvador Bartolozzi was born in Madrid in 1882. He was first taught by his father, an Italian craftsman who worked in the casts and reproductions studio at the San Fernando Fine Arts Academy. Bartolozzi was primarily interested in drawing, set design, the theatre and children’s stories. At the age of only fourteen he published his first drawings in the magazine Nuevo Mundo and at the age of nineteen he moved to Paris to complete his training and further his artistic ambitions. In the French capital he became familiar with the new artistic trends and with the European avant-garde movements. On his return to Madrid in 1907 he became known as a poster designer and illustrator for magazines including Blanco y Negro and La Esfera. He also began to work with the Calleja publishing house, becoming its artistic director in 1915. From 1909 Bartolozzi also began to collaborate with the writer and intellectual Ramón Gómez de la Serna (1888-1963) with whom he founded the regular debates at the Café Pombo. Bartolozzi would be the first to illustrate Gómez de la Serna’s texts and was extremely skilled at striking a balance between literature and art, “capturing the essential elements of the texts in order to locate them at the highest level of art. As a result the circle was closed: often deriving – at least in part – from artistic references, they in turn inspired artist friends, as a result of which the complex and fascinating world of artistic transpositions once again revealed itself.”

In 1925 Bartolozzi focused intensively on the world of children’s illustrations. He founded the weekly publication Pinocho, which became extremely popular in Spain in the late 1920s, even surpassing the fame of the original stories by Pinocchio’s creator Carlo Collodi. Bartolozzi also invented an entire series of youthful characters, in stories set in Madrid such as The Adventures of Pipo and Pipa, which were published on a weekly basis in Estampa. Many of these stories were adapted for the theatre, reflecting Bartolozzi’s passion for that medium. He also worked as a set designer for adult theatrical productions including The Shoemaker’s prodigious Wife by García Lorca and The Other by Miguel de Unamuno. After the Civil War Bartolozzi left Spain, first settling in France until the entry of the Nazi troops into Paris in 1941, then leaving for Mexico where he continued his activities as a writer and illustrator until his death on 9 July 1950.

The present sheet by Bartolozzi depicts a Café Scene of a type the artist would have been particularly with due to his regular participation in the informal debates that took place in Madrid cafés in the early years of the 20th century. In particular, he attended the debates at the Nuevo Café de Levante, in the company of Valle Inclán and Pío Baroja, and the ones at the Granja del Henar, together with Penagos, Bagaría, Ribas and Bayo Marín. He was, however, most often to be found at those held at the Café Pombo and which he himself founded in 1915 together with his close friend Ramón Gómez de la Serna. Spanish avant-garde culture found a venue for expression at these gatherings, which can be seen as a veritable school for writers, musicians and painters. During the debates at the Café Pombo, Bartolozzi either executed illustrations of Goméz de la Serna’s texts or made sketches from life. While some of these sketches formed the basis for illustrations published in various publications including Blanco y Negro and Estampa, for which Bartolozzi produced his famous Siluetas de Pombo, others were part of albums. In all of them the café provided the principal subject or the backdrop, and in either case constituted an essential element. 2

The present Café Scene was included in a monographic exhibition on Bartolozzi held in 2007. 3 The drawing, executed in Indian ink and gouache, uses a witty but extremely expressive line. The white of the paper and the black of the ink create contrasts of light and shade, softened by the greys of the ink wash and the touches of stumping. In the foreground, two neatly dressed waiters are located behind a round table and a chair. Depicted as self-absorbed, they do not look at each other, while their faces have a slightly caricatural feel, evident, for example, in their rounded cheeks and in the plump hand resting on the chair. In the middle-ground is a couple dressed in 1920s style and seated on a divan. The angled perspective used to construct the image leads the viewer’s eye through the scene while expanding the visual field and in fact, the space represented extends beyond the pictorial field as many of the elements are truncated. As a result, nothing in the sketch is finished and the viewer’s imagination is allowed to complete the suggested space. Despite the economy of means, this approach allows Bartolozzi to recreate to perfection the atmosphere of an early 20th-century café. The white marble, circular tables, the chairs with their simple, elegant lines, the divans around the walls and the mirrors hanging above them are all elements that rapidly conjure up places of this type in our imaginations.

Bartolozzi uses a distinctive and personal visual idiom in this drawing but one that reflects his early training in Paris. The compositional approach is derived from Degas and Toulouse-Lautrec, while the influence of the Japanese artist Foujita is to be seen in the use of Indian ink. 4 Another influence is that of the drawings of the English artist Aubrey Beardsley, with their thin, delicate lines and sensual, curving bodies. Bartolozzi achieves a subtle fusion of all these different sources and the result is a lively and unique expression of popular Spanish culture.