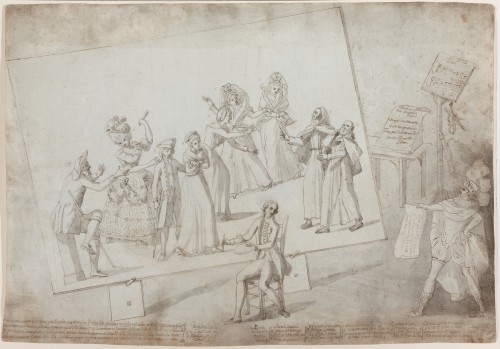 The considerable interest of the present drawing, which is a preparatory design for a print, lies in the fact that it takes the form of a satire, a genre characterised by irony in both its literary and pictorial forms. The intention of satire is to moralise or simply mock the human vices, follies, abuses and deficiencies of a person or group. It is, in other words, an intelligent attack on reality that makes use of humour. This genre was particularly popular in 18th-century Spain and was used by writers and artists with the intention of reforming society and ridding it of its excesses. Journals such as El Censor (1781-1787) brought Enlightenment ideals to all parts of the country and all sectors of society1. In the eighth text in its first edition an anonymous writer devoted a few words to the genre, including the following: “The common folk have a poor view of satire. According to them, it is the enemy of peace, the disturber of political calm, robbing citizens of their good name, confusing innocence with crime, and inciting subjects to rise up against their legitimate rulers […] I, on the other hand, affirm that satire is the firmest supporter of innocence, the best antidote against vice, the surest curb on relaxation.” Satire also played an important role in 18th-century Hispanic literature, which saw the presence of brilliant figures such as Diego de Torres y Villaroel, José Cadalso and Leandro Fernández de Moratín.

It was the 18th century that witnessed the rise of the satire within the field of the graphic arts, primarily in the media of drawing and printmaking. The subjects and themes depicted were varied ones, ranging from political satires such as the anonymous Satire against Napoleon Bonaparte (Madrid, History Museum, 1808)3, which uses the same model and format as the present image, to burlesque images such as Goya’s Capricho number 7, Ni así la distingue (Madrid, National Calcography)4, on the subject of a gentleman’s clumsy inability to identify a prostitute. Goya’s set of the Caprichos (1799) is, in fact, the most important and outstanding example of 18th century satire in the graphic arts. Through the prints in this series Goya offered a humorous but merciless critique of the defects that he observed in society, ranging from religious fanaticism to superstition, the Inquisition, unjust laws and more. In addition to Goya, artists such as Eugenio Lucas Velázquez, Leonardo Alenza and Eugenio Lucas Villaamil regularly produced visual satires.

As the inscription at the bottom indicates, the present drawing, which the unknown artist entitled “scandal received and not given”, must have been part of a small book of rhymes known as a quinterno as it was sewn from five folded sheets of paper. The image firstly criticises the clergy (characters 1 and 2 at the lower right corner) for allowing themselves to be “blinded” by women, thus resulting in their perdition (characters 4 and 5, upper right and left), and secondly makes fun of homosexuality (character 3, lower left), in the form of a sarcastic individual who indicates “I’m blind behind”. The image also criticises the nobility, represented by Don Fabián (character 8, in the centre), accusing aristocrats of dishonestly taking advantage of the people who serve them, in this case Don Fabián’s guide (character 8, also in the centre). In the drawing, all these vices are being portrayed by a seated painter who creates a notably theatrical scene with a popular air, suggesting some of the cartoons for tapestries made for the Spanish royal residences during the reign of Charles IV.

The canvas being painted in the scene offers a generalised satire on the period and a way of life. Outside the canvas, the image includes a second, more specific satire. The focus of criticism is the now unknown artist Juan Bengoechea (character 6), possibly an invented name concealing the identity of a real person of the day, whose abilities in the three arts that he practices are questioned by the Mask (character 7, right-hand corner), who remarks: “You’ve got everything necessary for being weak in the head /given that you’ve managed to be /a Painter, a Musician and a Poet”. These three art forms are also included in the image: painting in the form of the composition on which the artist is working and which forms the principal satire within this drawing; poetry, in the form of the book-stand in the right-hand corner where the titles of the verses are supplied; and music, in the form of the score, the violin, flute and bassoon.

Illustrations of this type, many of which were sold in huge numbers as part of printed lampoons, were created with the intention of raising the consciousness of the general public in 18th-century Spain in order to introduce and disseminate Enlightenment ideas throughout the country.