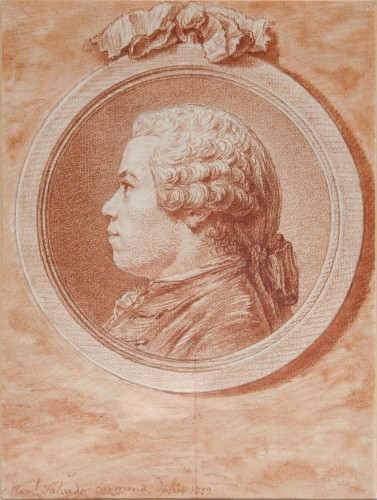 In 1752, Manuel Salvador Carmona, a young and promising draughtsman and the nephew of the prominent sculptor Luis Salvador Carmona (1708-1767), received a grant to continue his artistic studies in Paris, particularly in the fields of drawing, engraving and etching. There he coincided with three other artists who were completing their academic training: Juan de la Cruz Cano y Olmedilla, Tomás López and Alfonso Cruzado. In memory of that period of friendship and study, nine years later, in 1761, and while still in Paris Carmona executed an engraving in which he depicted himself and his companions (fig. 1, BNE, inv. no. IH/8433/2).

In that work the face in profile of each of the four figures is contained in a medallion that seems to sprout from the branches of a tree, while in the centre are two chained hearts crowned with a laurel wreath, an iconography referring to the fact that the artists were the fruit of a new generation destined to change the course of art in Spain. 1 The four medallions are also linked by a thick cord or chain. Completing the scene at the bottom is a fictive plaque with the phrase “LONGÉ ET PROPÉ”, meaning “separated but united”, which alludes to the fact that although he has completed his training, 2 returned to Spain and gone his separate way, Carmona will always be united with his companions and with France, the country that had welcomed and trained him.

In his print Carmona is located at the lower right, his image based on the present drawing. This was executed in 1759, as inscribed at the lower left corner, and is executed in red chalk, like most of the artist’s sketches. 3 Carmona depicts himself as a young man with plump features, a lively gaze and a certain air of bonhomie. Making use solely of red chalk applied with subtle gradations of greater or lesser intensity, the artist achieves a powerful expressivity and a rigorous representation of the details of the face, revealing his exceptional gifts for portraiture. This sketch was almost undoubtedly made as an individual self-portrait for a subsequent engraving that was ultimately not produced. Carmona’s intention was to depict himself following the model used by his master Nicolas Gabriel Dupuis (1695-1771), with whom he had studied at the Royal Academy of Painting and Sculpture in Paris and through whom he became a consummate master of engraving. His portrait thus closely follows the model used in the portraits by his master of Jean-Baptiste Lemoine le Fils of 1755 (fig. 2, Versailles, Châteaux de Versailles et de Trianon, inv. no. LP65.115.1) and of the historian and jurist Léon Ménard (Versailles, Châteaux de Versailles et de Trianon, inv. no. LP70.83.2). Both include the large stone border around the figure, with the sitter in profile and a large bow at the top of the border which aims to create the trompe-l’oeil effect of a suspended medallion.

Shortly after he produced this print, in 1763 Carmona was summoned to the Spanish court by Charles III. His training in France and remarkable talents allowed him to totally transform the practice and art of engraving in Spain. He began by producing devotional images then soon moved on to illustrating some of the most important literary editions of the time, such as the Sallust for the Infante don Gabriel in 1772, Iriarte’s poem La música of 1779, and Ibarra’s edition of Don Quijote of 1780. In 1783 Carmona was made engraver to Charles III after he executed an engraved portrait of the monarch based on Anton Raphael Mengs’s painting, demonstrating the perfection of imitation and chromatic gradation that he was capable of achieving in his prints.

This drawing was disseminated through a lithograph by Rufino Casado, published by Valentín Carderera, who at that date owned the drawing, with the purpose of illustrating the biography of the artist published in the illustrated magazine El Arte en España, edited by Gregorio Cruzada Villaamil, in 1862. A printed text below the image reads: “Fac-simile del retrato dibujado por el mismo en 1759. De la Colección del Sr. Valentín Carderera” (fig. 3). There is no doubt that this was taken from the present drawing given that the text also states that: “his bust totally resembles the print published by this journal, taken from another beautiful drawing made in red chalk.” 4