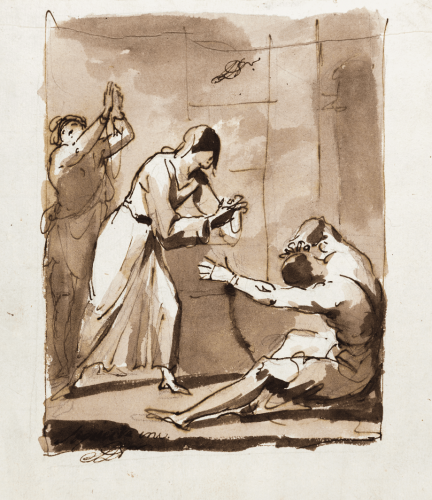 The Portuguese artist Domingo Antonio de Sequeira is one of the maximum exponents of the transition between Neo-classicism and Romanticism in Portugal. Born into a modest family and educated at the Casa Pia in Lisbon, Sequeira received his initial training in art at the Aula Régia de Desenho e Figura. At the age of twenty he went to Rome where he embarked on his training as a history painter specialising in the human figure with Antonio Cavalluci and Domenico Corvi. Both were close to the artistic theories of the Bohemian painter Anton Raphael Mengs, one of the leading representatives of Neo-classicism in painting. Sequeira gradually established his reputation in Rome, particularly after he received various second prizes for his drawings, the discipline for which he became particularly noted and he was ultimately considered one of the finest draughtsmen in Europe of his day.[1] It was this ability that helped him to achieve the status of honorary member of the Accademia di San Lucca in 1793. During his years in Italy Sequeira sent back works to the Portuguese court in order to demonstrate his progress and shortly after his return to Portugal in 1795 this earned him the appointment of court painter. From this point onwards he produced numerous portraits of the royal family. After their departure for Brazil in 1807 Sequeira modified his pictorial idiom and subject matter and moved closer to the Romantic sensibility, encouraged by his marriage and personal happiness and giving rise to numerous depictions of the individuals dearest to him.[2] During those early decades of the 19th century he also undertook a varied range of commissions, including the design for a dinner service for the 1st Duke of Wellington, sculptures, funerary monuments and a large number of other projects for which drawing was the principal tool of creation.[3]

Dr Gomes Markl, an expert on the artist, has noted that it was through “the practice of drawing that he found his own expressive space, liberating his creativity […] above all through his enormous capacity for improvisation and his poetic treatment of the subjects.”[1] This is evident in the vast corpus of drawings by Sequeira to have survived, some of them studies for subsequent finished works but most of them uncompleted projects, sketches or independent drawings.

The range of techniques and materials is another characteristic of Sequeira’s drawings and he developed a rapid technique known as “blots”, for which an ink blot or the residue from cleaning his brushes provided the starting point for a composition. This technique seems to have first appeared in drawings produced in Rome towards the end of his stay there, between 1794 and 1795, giving rise to works in which rapid pen strokes give form to the patches of ink and charcoal blending, creating figures, landscapes and ultimately narratives. One example of a drawing of this type is The Expulsion of Cain (fig. 1, Lisbon, Museu Nacional de Arte Antiga, inv. no. 1216 Des). The process culminates with the informalism of the works from the last years of the artist’s life in which the patches of ink acquire their own identity, liberating themselves from any preconceived scheme, as in Shipwreck (fig. 2, Lisbon, Museu Nacional de Arte Antiga, inv. no. 2729 Des).[2]

The present sheet dates from the same period of experimentation as the above-mentioned drawing of The Expulsion of Cain. The signature “Siqueira inv.” and the anagram “Ds” present on both allow them to be precisely dated to 1794-95 within the artist’s Roman period, which is when he used this form of signature on his drawings.[3] Executed in pen and grey-brown ink with washes of the same colour in varying degrees of opaqueness, this sheet depicts three figures in prison cell that is lightly suggested by some lines in a manner which reveals Sequeira’s mastery and ability to compose the entire scene using a few brief strokes. A blindfolded woman, her hands joined in prayer, centres the composition and may be a representation of Faith. She directs herself towards a prisoner, characterised by his gesture of despair. He is sitting on the ground, his torso bare and shackles and chains hanging from his arms. Behind the principal woman is another standing one, her upper body also unclothed and her hands bound with shackles. The subject could thus be an allegory of Faith visiting Prisoners, a subject which Sequeira did not depict in any canvas nor are any other drawings on a similar subject known. However, throughout the artist’s career he did depict prison scenes in other drawings although none of them are comparable to this one, for example the sketch of Chained Prisoners of 1810 (Lisbon, Museu Nacional de Arte Antiga, inv. no. 1468 Des) and a number of sketches from the series on “Count Ugolino with his Sons in prison” (Lisbon, Museu Nacional de Arte Antiga, inv. no. 2695 Des). The present sheet is thus undoubtedly an independent drawing in which the artist not only devised a particular iconography but also imbued it with enormous expressivity and formal freedom, allowing us to appreciate why Domingo Sequeira is considered so important as a draughtsman.