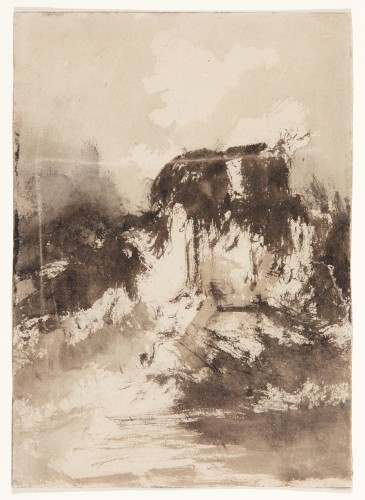 Eugenio Lucas Velázquez was born in Madrid on 9 February 1817. Nothing is known of his childhood or early training. While various suggestions have been made with regard to his first teachers it seems likely that he attended classes at the Real Academia de Bellas Artes de San Fernando, given that in 1841 he participated in the annual competition with two “caprices” and two genre scenes. In addition, in the catalogue of the 1855 Paris Universal Exhibition he stated that he had been a pupil at that Academy. Nonetheless, Lucas’s principal teacher was the Prado Museum where he spent lengthy periods copying works by Velázquez and Goya1. The latter had the most influence on his style and artistic personality and Lucas assimilated the Goyesque universe to the point where the works of the two artists have on occasions been confused. Lucas’s first known works, Rocky Landscape with Figures and Landscape with Fishermen (Madrid, Lázaro Galdiano Museum), signed and dated 1838, are particularly interesting in that they link Lucas to the work of his close friend the landscape painter Genaro Pérez Villaamil, whom he subsequently depicted in a portrait of 1849. That year would be a crucial one for Lucas as he executed a landscape for the royal consort, Francis of Assisi, husband of Elizabeth II, and as a result initiated a close association with the Spanish monarchy. This relationship would last for many years and would result in Lucas’s rapid social ascent. In 1850, for example, he received a royal commission to paint the ceiling of the Royal Theatre, a project that earned him the title of Honorary Court Painter, while on 12 July 1853 the Queen made him a Knight of the Order of Charles III after he had painted the portrait of the conquistador Pedro de Valdivia, presented as a gift to Chile by the Spanish government. In the summer of 1868 Lucas travelled around Italy and Switzerland, and one year later set out for the Basque Country. His travels are recorded in a series of drawings that were published by Félix Boix in 1922. This period in the artist’s life coincided with the exile of Elizabeth II. Lacking royal protection and without any major commissions Lucas soon began to squander his fortunes2. He died shortly after in Madrid on 11 September 1870 and was buried in the church of Saint Martin3.

The present drawing depicts a Stormy Landscape, executed with washes of India ink applied with great deftness and freedom. In his memoirs, the contemporary Spanish landscape painter Martín Rico (1833-1908) noted that: “Lucas would fill two or three dishes with shades of ink ranging from the darkest to the lightest; he would dip a rag into them and, using that sort of holy water sprinkler, apply it to the paper, then another darker one and so on until something emerged, as his pupil noted: on occasions that something was rather surprising, and it has to be said that the artist did not know what was going to come out; but then, with a few touches of the brush or pen he completed the trees, mountain peaks or mists, depending on what the patch [of ink] suggested”4.

José Manuel Arnáiz, the historian who has focused in most depth on the work of Lucas, had Rico’s words in mind when he noted that: “Lucas splashed the paper with one or more drops of ink, sometimes of different colours, sometimes just one, more or less diluted, rubbing them across the paper so that as they spread out they began to suggest a landscape or a scene from his fertile imagination, which, in truth, did not require much stimulus […] Skilfully directed, once some of these drops were rubbed and some of them spread out, the ink formed evocative scenes, often bewitching and, of course, mysterious landscapes”5. Both Rico and Arnáiz thus emphasise the spontaneous manner with which Lucas created these works and their extremely evocative character. The result of a last-minute gesture of the artist’s brush or pen, they also depend on what the viewer thinks that he or she sees among the liquid shadows of the ink washes.

Hundreds of drawings of this type by Lucas are known, due to the fact that from around 1860 (the date that can be suggested for the present sheet), something in the nature of a competition arose between Lucas and Genaro Pérez Villaamil to see who could produce the largest number of works in the shortest possible time6.

The present sheet can be related to other drawings by Lucas of this period on the subject of landscape, including Mountain (Arnáiz, 176), Cliff (Arnáiz, 172), Fantastical Landscape (Arnáiz, 154), and Landscape and Pool (both De Castro collection). It is also comparable to drawings of other types such as Two Masks and Street Scene (Madrid, Prado Museum). All reveal a use of the same technique and support, but above all, the same freedom of handling and conception.

This extensive series of drawings should also be related to a number of gouaches painted by Lucas around 1860. Mainly small-format genre scenes (approximately 50 x 70 mm), they are painted with extremely rapid, vibrant and heavily charged brushstrokes that produce an effect of immediacy and movement comparable to that found in the drawing under discussion here. Examples of such works include Bullfight and Coach in a Storm (Castres Museum), the small gouache sketch of The Water Supply, Lozoya (private collection), and The Crusaders before Jerusalem (Madrid, Lázaro Galdiano Museum).

[1] When speaking of Eugenio Lucas in his memoirs, José Lázaro Galdiano noted that the artist: “set himself up in the Prado Museum as if at home, copying over a number of years the work of Velázquez and Goya, followed by Goya and Velázquez, just for a change.” See: Lázaro Galdiano, José, “Lucas and his son” in Exhibition catalogue Los dos Lucas, New York, Wildenstein & Co., 1942.

[2] Again the source for this information is Lázaro Galdiano: “When the 1868 Revolution began, our painter’s clientele emigrated with the royal family. Lucas, who had lived in great luxury due to his large, important commissions, squandered his fortune and soon found himself without clients and without a penny.” Lázaro Galdiano, José, “Lucas and his son” in Exhibition catalogue Los dos Lucas, New York, Wildenstein & Co., 1942.