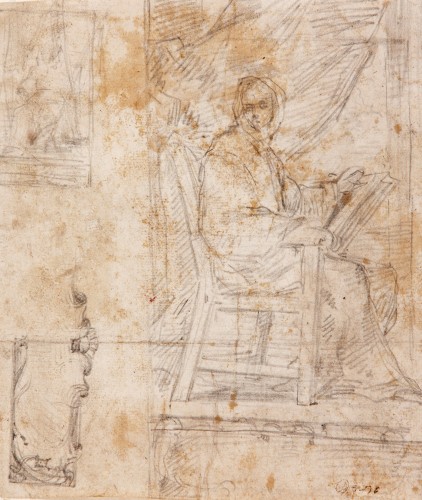 Study for a seated Man

The painter and architect José Jiménez Donoso was a leading figure in the Madrid Baroque school of the 17th century. His life spanned a significant period of transition within the Spanish monarchy as he was born and trained as an artist during the reign of Philip IV, further developed his style during the regency of Mariana of Austria, and reached his mature phase during the time of Charles II. Jiménez Donoso first learned to paint with his father, Antonio Jiménez Donoso, and once settled in Madrid he entered the workshop of Francisco Fernández, an artist who had trained with Vicente Carducho. However, Donoso’s trip to Italy and his early training in Rome were of most importance for the formation of his artistic personality. On his return to Madrid, where he lived until his death, the artist perfected his technique with Juan Carreño de Miranda, who brought him into contact with Francisco Rizi and with the pupils and followers of both artists, constituting the core of the Madrid Baroque school at its height. Donoso thus met Claudio Coello who would become a friend and collaborator on important joint projects. On occasions, the two artists’ styles have been confused. Donoso was a reference point for other, younger painters including Francisco Ignacio Ruiz de la Iglesia, Antonio Palomino (who wrote his biography), and Sebastian Muñoz, among others.

Donoso’s artistic idiom can be described as typical of Madrid Baroque painting of his day. It is characterised by a markedly Roman influence, specifically the work of Pietro da Cortona, Gian Lorenzo Bernini and Francesco Borromini, as well as Venetian painting in the form of Veronese, and the use of Flemish compositions. Donoso worked as a painter, as well as producing designs for altarpieces and buildings and also writing a treatise on stereometry in relation to cutting masonry. He was particularly outstanding in mural painting, a field in which he influenced contemporaries such as Coello and Palomino (examples in Madrid, former Colegio Imperial, Casa de la Panadería, Cuarto de la Reina in the (destroyed) Alcázar; Toledo, Vestuario in the Cathedral). The artist reached the professional summit of his career when he was appointed Painter and Master of Works to Toledo Cathedral.

The present unpublished drawing depicts a man sitting in an armchair in an interior, holding a book in his left hand and looking attentively at the viewer. To one side a curtain closes the composition. Hanging on the wall behind the figure is an image that seems to be a painting depicting another seated figure, possibly Saint Andrew. In the lower part of the drawing are two sketches of an architectural bracket, drawn to different scale than the principal figure and clearly related to a different composition.

The originality of Donoso’s composition lies in the unusual viewpoint adopted for the depiction of the seated figure. It is considerably less stereotyped than other comparable images by contemporary or earlier painters, for example, Mariana of Austria (by Martínez del Mazo, Toledo, Casa de El Greco Museum), or the portrait of that sitter by Carreño de Miranda (Madrid, Prado Museum), Cardinal Nithard (by Alonso del Arco, Madrid, Prado Museum), and Study for a Prelate (by Pedro Ruiz González, Madrid, National Library). The present drawing, which is signed by the artist, is characterised by his unusual style, distinctive line and dignified presentation of the figure.