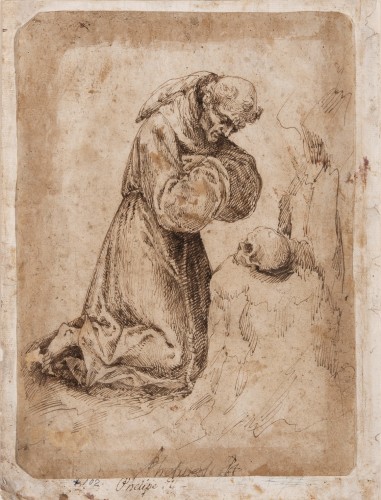 One of the areas of Spanish art that has most attracted the recent interest of art historians is that of Golden Age drawing. Since the pioneering studies of Stirling Maxwell, who assembled an important collection in the late 19th century, to Mayer, Sánchez Cantón and Pérez Sánchez, art historians have gradually reconstructed the dense panorama of artists and schools that characterised Spain in the 16th and particularly the 17th centuries. Sadly, not all schools have been the subject of equal attention. Thus, in contrast to the detailed and extensive knowledge available today on Madrid, Seville and Valencia, there are other lesser centres of which almost nothing is known due to the small amount of drawings that have survived. For this reason, the appearance of works such as the present one allow more light to be cast on artists who, although of lesser importance than figures such as Alonso Cano, Murillo or Claudio Coello, achieved considerable status in their own lifetimes but fell into oblivion after their deaths.

As noted, alongside the principal artistic centres in 17th-century Spain there were other, lesser ones such as Aragon and Valladolid. The present drawing, a Study for Saint Francis of Assisi in prayer, can be ascribed to the latter. Measuring 260 x 185 mm, it is attached to a larger sheet (278 x 208 mm). In the lower centre of the principal sheet is the signature of the artist, “Phelipe Gil”, in the same grey-brown ink used for the rest of the drawing, for which reason it can be considered original. This is not the case with the second signature on the larger sheet, which was undoubtedly added later to clarify the original one. The present work is thus by the Valladolid artist Felipe Gil de Mena.

Gil de Mena was born in Antigüedad (Palencia) on or before 11 February 1603, the date of his baptism. Around 1619 he moved to Valladolid where he became an apprentice of Diego Valentín Díaz (1586-1660), the most important artist in the city at that time. In his Lives, Palomino states that the artist went to the court in Madrid where he met Juan van der Hamen. Although this information seems no more than anecdotal, there is certainly an evident influence of Van der Hamen’s work on Gil de Mena’s paintings and it is known that his master owned various still lifes by that artist, with which Gil de Mena must have been familiar.

Gil de Mena’s style has also been associated with the work of another Valladolid artist, Antonio de Pereda (1611-1678), although again there is no documentary proof of contact between them. 1 The first known works by him date from 1639, while one year later he received one of the most important commissions of his career, to decorate the cloister of the monastery of San Francisco in the city, for which he painted 32 works on the saint’s life. 2 Gil de Mena consequently became one of the most sought-after artists in the area, primarily painting for the religious communities – Franciscans, Dominicans and the Carmelites of Medina del Campo, Valladolid and Medina de Rioseco. He combined this activity with the production of altarpieces for numerous churches in towns and villages in the area, including Tordesillas, Peñafiel and Villagarcía de Campos. 3 On the death of his master in 1660, Gil de Mena acquired his studio including his collection of prints and drawings. He converted it into his home, where he died thirteen years later on 17 January 1673.

As noted above, the smaller sheet depicts Saint Francis of Assisi in Prayer, executed in grey-brown ink with concise, rapid strokes that indicate an artist at the height of his powers. The figure of the saint is drawn in detail, particularly the mantle and skull, with repeated strokes of the pen to create the effects of light and shadow. In contrast, the rocky landscape is lightly sketched in with a few strokes. Sadly, this drawing cannot be associated with any of the artist’s known paintings, 4 although it would very probably have been a preparatory study for one of the numerous altarpieces on Franciscan themes that he produced throughout his career.

The drawing on the back of the larger sheet depicts the episode of The Embrace of Joachim and Anna at the Golden Gate. It occupies the upper part of the sheet and is set inside a black chalk rectangle drawn by the artist. Black chalk is also used to define the outlines of the faces and the general lines of the figures, leaving the faces blank or indicating the eyes, noses and mouths of some of them with just a few strokes. To create the highlights the artist used the colour of the paper, which he masterfully combined with sepia wash to create a powerful sense of volume in the figures. The composition is judiciously organised into three groups of two figures: the centre one comprising the principal characters, Joachim and Anna. They are flanked by the other two groups, the one on the right in animated conversation and paying little attention to the events taking place and the one on the left commenting on the meeting between the Virgin’s parents. Finally, the artist squared up the drawing, undoubtedly in order to transfer it to canvas.

It is notable that the two drawings are executed in very different techniques on different sheets of paper. However, insufficient evidence survives to assess the artist’s technique, particularly with regard to The Embrace of Joachim and Anna at the Golden Gate, given that no other drawings or paintings on this subject by his hand have survived. Nonetheless, the approach recalls Madrid drawings of the first half of the 17th century, particularly works from the studios of Vicente Carducho (ca.1578-1638) and Eugenio Cajés (1574-1634). It is not impossible that Gil de Mena owned one of these drawings, using it as a model and reference point, particularly bearing in mind Palomino and Ceán Bermúdez’s comments, who note that,“he had an academy in his house […] and a large collection of drawings, prints, sketches and models, which were valued on his death at 3,000 ducados.” 5