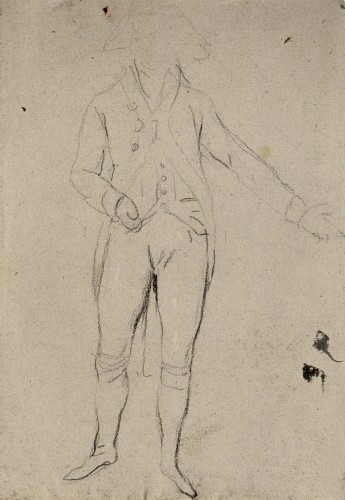 In 1796 the scholar and writer Francisco Cerdá y Rico (1739-1800) was commissioned by Charles IV to translate the Pratique de l’équitation, ou l’art de l’équitation réduit en principes by Louis-Charles Mercier Dupaty de Clam and published by Lacombe in Paris in 1769. The manuscript of this text had been read and annotated by the monarch himself and by Manuel Godoy. By translating Dupaty’s book Cerdá’s idea was not only to combat “the great ignorance that habitually prevails in Spain with regard to the noble exercise of horsemanship” but also to separately publish the translations of two other treatises on this subject, by Mottin de la Balme and the Baron of Bohan. 1 This ambitious project was to feature two profusely illustrated editions, one in large folio format and the other a quarto edition. The first was entitled Real Picadero de Carlos IV and Antonio Carnicero was commissioned to produce its illustrations. In 1788 Carnicero had been made an academician of merit at the Academia de San Fernando in Madrid, and in 1796 he was appointed court painter to Charles IV, producing numerous portraits of members of the royal family from that date onwards, both in the form of canvases and prints.

Carnicero was ideally suited to producing the drawings for this project as he had already executed twenty plates for Ibarra’s edition of Don Quijote published by the Real Academia de la Lengua between 1780 and 1782. He had also been involved in the illustration of the series of Retratos de los españoles ilustres (Real Calcografía, 1788) and Book IV of the Colección de trajes de España (Real Calcografía, 1778-1784). 2

In the numerous plates for the Real Picadero de Carlos IV Carnicero depicted the principal members of the royal family: Charles IV, Luis de Borbón, the Prince of Parma, and the Prince of Asturias, together with Manuel Godoy, the monarch’s all-powerful prime minister, shown engaged in the different exercises of the art of horse riding. The second edition was entitled Cartilla de equitación and the original drawings intended to be reproduced as approximately 30 prints to illustrate it were commissioned from Cosme Acuña y Troncoso (1760-c. 1814). In the end, thirteen prints were made for the first edition between 1797 and 1801, and only five for the second. They were engraved and printed at the Real Academia de Bellas Artes de San Fernando by the finest printmakers of the day. Neither of the two editions was in fact completed due to the scale of the project and the fact that neither the artists who made the drawings nor the engravers were paid.

During the process of making their drawings, both artists daily attended the riding exercises at the Real Picadero [Royal Riding School] in Aranjuez, for which they were paid 40 reales a day.  The drawings are known to have been completed by 8 April 1798, 3 and intermediary pencil studies have survived for many of them (fig. 1, MNP, cats. D-008566 and D-008567), as well as some of the final drawings to be reproduced as engravings (fig. 2, Calcografía Nacional, inv. nos. D296 and D132). 4 Nonetheless, as noted above, only eighteen plates were finally engraved, subsequently entering the archive of the Calcografía between 1799 and 1800. 5

The present drawings are a fine example of the creative process undertaken by Antonio Carnicero for the publication of the Real Picadero de Carlos IV, given that they represent two very different states in the creation of the project. The first, a very summary and schematic sketch, is an initial idea for the figure of Manuel Godoy for inclusion in the book’s frontispiece. Godoy is depicted standing and wearing riding gear: a riding coat, breeches and boots. His face is not even suggested but he wears a tricorn hat. The image essentially focuses on a rapid definition of the figure’s form. Carnicero’s ability to capture movement through just a few brief pencil strokes reveals both his abilities and the spontaneity of this drawing, which was undoubtedly made from life. The position of the figure, with the left foot forward and the right suggesting action, and the left arm stretched out while the right is bent in towards the body at waist level, is almost identical to Godoy’s pose in the frontispiece plate as it was engraved by Manuel Salvador Carmona (see fig. 3, Biblioteca de la Real Maestranza de Caballería de Ronda). Slight differences are evident between the initial sketch and the figure finally engraved, such as the fact that in the print Godoy is wearing a cummerbund and a sash across his chest. Nonetheless, it is clear that the essence of the composition and the artist’s idea for it are already present in the initial drawing. Carnicero only made some small changes to the figure, turning the body slightly to the right in contrast to the frontal pose of the sketch in order to adapt it to the group of figures present in the print and thus establish a better dialogue with them. It is in these rapid and spontaneous pencil sketches that the artist most clearly reveals his mastery and expressive powers.

In contrast, the second drawing is highly finished and ready to be reproduced as a print. Depicting Manuel Godoy mounted on a horse at a walking gait, it was engraved by Francisco Muntaner Moner (1743-1805), one of the leading engravers of the period and an academician of San Fernando. The print was made in 1800 and it is known that Carnicero was paid 1,000 reales for his drawing for it. The engraving exactly reproduces the drawing with regard to the horse’s movement and anatomy but it reveals some differences in the setting and rider. In the case of the former, the print exactly reproduces the strictly architectural lines, with a high dado, a striated pilaster and even the diagonal shadow that divides the upper right area of the background. However, the decorative motif in the form of a cartouche surrounded by rocaille work is no longer present in the upper left of the image. In the case of the rider, the engraver replaced the portrait of Manuel Godoy with a conventional face 6 with a rounded nose and wearing glasses (fig. 4, Calcografía Nacional, R.3015). 7