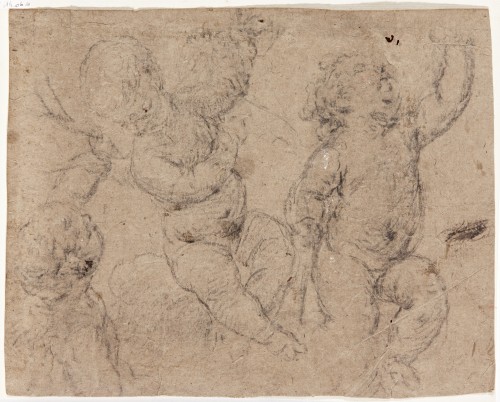 Front: Study of angels / Back: Study of saint or monk (Saint Anthony of Padua?)

Over more than 50 drawings of Juan Carreño de Miranda are preserved in museums and private collections in and out of Spain. In them, the painter demonstrates his absolute mastery based on vigorous and rich strokes, using the technique of blending charcoal with red and white chalk. As a result of this combination, intense soft and sensuous qualities are evoked which reveals, the same as in his paintings, his admiration for the Venetian masterpieces. This significant number of drawings- considering the fact that together with Alonso Cano he is perhaps one the most prolific Spanish artists of the 17th century regarding designs- proves as well, up to what extent Carreño analyses each one of the details of his paintings before conveying them on the canvas.

The actual drawing is double-sided with two designs done in charcoal on brown paper. On the front surface, a study of three big angels is depicted. On the back, to the left of the paper and barely sketched, a light study is observed of a saint or monk figure; to the right, slightly perceptible, a second study executed more rapidly, even more if possible, is seen, perhaps the same figure but its position is inverted. It is not unusual to find in Carreño´s work the utilization of both sides of the paper, as is observed in a drawing from the Apelles Collection in London. Done in black pencil and red chalk, around 1640-1650, one can observe both a study of big angels´ heads (front), and a figure of  San Diego de Alcalá (back) [1].

The development of the Spanish Barroque paintings of Madrid, in its determination on evoking more dramatical and vivid scenes, brings about an increase in the production of religious art work created with many series of angels. This becomes evident above all, in the representations of the Assumption of the Virgin and the Immaculate Conception, composed by large numbers of angels that will sustain and surround the Virgin figure. This is perfectly noticeable in Carreño´s work, from the end of the decade of 1650, which undergoes a major Baroque expression. A good example of this is found in the Assumption of the Virgin of the Diocesan Seminar of Segovia, painted in 1656, or in the Immaculate Conception of the Fine Arts Museum of Bilbao (1665-1670). One can also find them in other religious works of art, such as in the spectacular canvas of the Foundation of the Trinitarian Order of the Louvre, in the Apparition of the Virgin with Child to Saint Anthony of Padua fresco painting in the dome of Saint Anthony of the Portuguese, or in the disappeared Saint Isidro painted for the saint´s chapel in the church of Saint Andrew in Madrid, to which its aspect is known thanks to an engraving of Juan Bernabé Palomino (1792).

Carreño studied thoroughly all these compositions, analysing precisely the dramatic perspective of the small angels that compose his paintings. There are numerous conserved drawings of this subject matter that prove this, citing some examples, in the Prado Museum, the National Library of Spain, the Apelles Collection of London or the Louvre Museum[2], and to which should be added this unpublished piece. To create this work, he seems to inspire himself on Italian and Flemish engravings, especially on artists such as Schelte to Bolswert, Pieter de Jode or Lucas Vosterman on compositions of Rubens or Van Dyck.

The back surface of this drawing shows, as previously indicated, the figure of a monk or a saint. He is depicted in a three-quarter length, wearing a habit and looking towards our right while he raises one of his arms. This position is repeated almost exactly in another drawing of Carreño created very rapidly in black pencil, representing Saint Anthony of Padua (Madrid, Prado Museum). Likewise, both designs can be linked to both paintings of identical subject matter conserved in the Prado Museum and the Santa Cruz Museum of Toledo[3]. All this leads us to think that the figure depicted on the back of the drawing, analysed here, is a study for Saint Anthony of Padua.