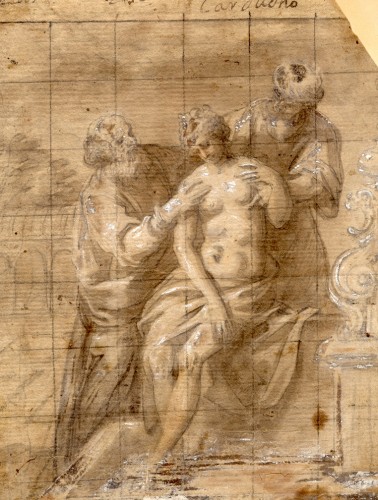 Susannah and the Elders

The present drawing depicts the Old Testament episode of Susannah and the Elders (Daniel, 13). The chaste Susannah appears in the centre of the composition, receiving the unwanted attentions of two elderly judges who intend to assault her. Susannah is bathing in an ornate fountain with a sculpture in the form of a lion’s head. The scene is set in a lightly sketched garden that terminates with a porticoed gallery in the background, behind which various treetops are visible.

The composition is entirely drawn in black chalk with particular attention paid to the definition of the three figures, which are outlined and modelled in greater detail. In contrast, the pool in which Susannah is bathing and the architectural background are very lightly suggested with rapid strokes that reveal the artist’s technical abilities. Carducho made use of sepia ink to create a greater sense of volume in the figures, outlining and redefining some of the forms that he had initially drawn with black chalk. He subsequently applied a series of graduated washes with the brush that he used to increase the volumes, in particular for the figures of the old men. He also made use of lead white, again applied with a brush, in order to create the highlights on the draperies, figures and above all the fountain. Finally, the sheet was squared up for transfer to canvas or possibly fresco. Outside the squared-up area, at the upper right, is the inscription “Carducho” in pen and iron gall ink, written in a hand other than the artist’s.

The style of the drawing is typical of that of the Madrid artist and art theoretician Vicente Carducho (1576/1578 -1638). Carducho revealed his Tuscan origins when he described his drawing technique in his treatise Diálogos de la Pintura, published in Madrid in 1633. For the “strokes” he advises the use of black chalk, pen and washes, while for the highlights he recommends “white chalk, diluted gesso or lead white [for tinted papers], which can be greyish-brown […] or other colours.” 1 He also suggests the use of squaring up, which would subsequently be used by the artist himself or by his assistants for transferring the composition “to the canvas or the wall”. 2 Carducho clearly adhered to his own recommendations in theory and in practice, as is evident in some of his drawings for the series for the Charterhouse of El Paular, the drawing of The Holy Family in the Museo Nacional del Prado (D-87), the sheet of The Adoration of the Magi in the British Museum (Inv. no. 1946.0713.1024), and The Beheading of Saint John the Baptist in the Uffizi (Inv. no. 2279 S). A study of these drawings reveals that they are clearly by the same hand as the artist who created the present work.

Born in Florence around 1576, Vicente Carducho arrived in Spain in 1585 with his brother Bartolomé (c. 1560-1608). His artistic training essentially took place at El Escorial alongside his brother and the other Italian artists working there. From 1607 onwards he worked on the decoration of the frescos for the palace at El Pardo (Madrid) and two years later was appointed Court Painter. The most important commission of Carducho’s career dates from 1626 when he was entrusted with the series of large-format canvases for the cloister of the Charterhouse of El Paular. The decade of the 1630s was also a particularly successful one when the artist participated in the major artistic project of the day: the decoration of the Hall of Realms in the Buen Retiro Palace (1634), for which he painted three historical compositions. Carducho died in Madrid in 1638. 3

The episode of Susannah and the Elders was generally used by artists to exemplify the values of virtue and female chastity in contrast to lust, represented by the elderly men assaulting the woman. No known painting on this subject by Carducho has survived nor any documentary reference to one. Nonetheless, the intended destination of the work can be deduced from his comments in the Diálogos de la Pintura (1633). In Dialogue 7, headed “On the differences and ways of painting historical and sacred stories and the necessary decorum that must be applied”, Carducho clearly indicates the appropriate manner of painting “stories of Prudent, chaste and courageous matrons, of which the Holy Scriptures offer us models for spiritual and moral exhortation”. He also states that such works were suitable for the private apartments of queens and noblewomen, who would see them as exemplars and sources of moral doctrine. 4 One such example is the fresco of an episode from the life of Esther painted in 1613-1618 by Jerónimo de Cabrera in the palace at El Pardo on the ceiling of the Queen’s Antechamber.

Bearing in mind that Carducho also worked on the decorative scheme at El Pardo, it might be suggested that the present drawing is a preparatory study for one of the rooms in that palace. Jerónimo de Cabrera obtained the above-mentioned commission by offering to work for a lower fee than that proposed to Philip III by Fabricio Castello, Eugenio Cajés and Carducho himself. 5 This suggests that these painters had also proposed a project for the Antechamber, with which the present sheet could hypothetically be associated. If this is the case, the drawing can be dated to around 1612.