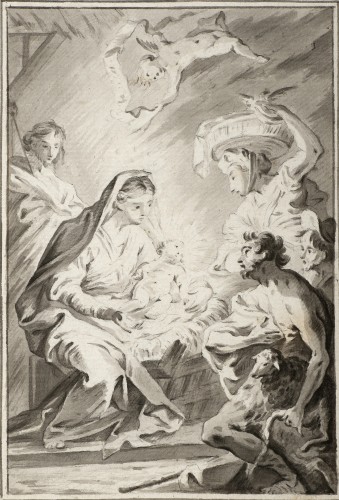 The Adoration of the Shepherds

Born in Valencia on 19 September 1772, Vicente López began his training with Antonio de Villanueva at the Academia de Bellas Artes de San Carlos in that city. In 1789 he was awarded its first class prize for the canvas King Hezekiah flaunting his Wealth (Valencia, Museo de Bellas Artes San Pío V), which brought him a grant to study in Madrid. López thus enrolled soon after this date at the San Fernando Academy in the capital, continuing his studies there and assimilating the teachings of Mariano Salvador Maella (1739-1819), from whom he derived his taste for precise, detailed draughtsmanship when preparing preliminary studies for his works, as well as a Baroque sense of colouring in the final compositions. López’s study of the frescoes by Luca Giordano and Corrado Giaquinto in the royal palaces in Madrid would also be fundamental to the development of his aesthetic language.

After some years in Madrid he returned to Valencia in 1792, with the reputation of having achieved renown at court. López received numerous commissions in his native city for works in all genres, notably the fresco of The Allegory of Valencia commissioned by the City Council in 1800. In 1814, after the Peninsular War, Ferdinand VII summoned López to court, appointing him First Painter to the Privy Chamber one year later, which consequently made him the most highly sought-after painter of the day. From that point onwards López would combine his activities as director of the decorations of the Royal Palace in Madrid with portraiture, the field in which he gained most renown due the direct, sincere way in which he depicted the sitters and his rich, sumptuous treatment of the clothing and textiles. On Ferdinand’s death he retained his position at court under the young Queen Isabel II until his death on 22 July 1850. 1

Aside from his large oeuvre as a painter, Vicente López is also noted as a draughtsman. He was one of the most prolific graphic artists within the entire history of Spanish art and the most important in the 19th century. His drawings encompass a wide range of functions: designs for mural decorations; compositional studies on religious and historical subjects; portraits; copies of the Old Masters; landscapes; nude figure studies; sketches for prints; and some independent works intended for his own pleasure or to be given to friends and relatives. This striking variety is also evident in the techniques used, although López always remained within the boundaries of the academic tradition in which he was trained, characteristically using black chalk and wash applied with a brush. 2

Within this large corpus of drawings by the artist, the most sizeable group consists of preparatory drawings for paintings and drawings intended to be engraved. The latter are also very diverse, depending on their final purpose, ranging from portraits to visiting cards, political allegories, devotional prints and religious images intended as book illustrations. 3 The present work falls within the latter type, depicting The Adoration of the Shepherds. It is the preparatory drawing for a print on the same subject by Vicente Gil y Capilla of around 1816-1818. 4 The print illustrates chapter 15 of the 1818 edition of Catecismo histórico by Claude Fleury (1640-1723), one of the most widely disseminated publications of the period as it was used as a school text book during most of the 18th and 19th centuries. 5

In technical terms, López first used black chalk with a fine point to create the overall composition, then almost completely reworked it with grey wash applied with a pen. This combination means that the chalk is almost entirely concealed, although the subtlety with which it is applied is evident in some areas, such as the glow emanating from the face of the Infant Christ or the hair of both Saint Joseph and the angel that descends from the heavens bearing a scroll. Finally, López used a brush to apply various layers of grey wash, diluted to different degrees, in order to darken some areas such as the Virgin’s mantle, the manger and the shepherd in the foreground with a lamb, thus creating effects of light, shadow and volume. In order to complete the composition he enclosed it in a double frame, again drawn in pen and grey ink. The overall result is an image created with enormous freedom in the handling, in which the artist aimed to convey effects of chiaroscuro that would subsequently have to be reproduced in the print.