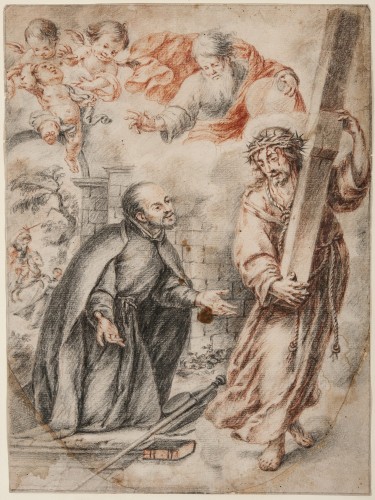 Juan de Valdés Leal was one of the most multi-faceted and outstanding artists of the Andalusian Baroque. His oeuvre encompasses not only important paintings but also a significant corpus of drawings. This is reflected in the description of him by the painter and writer on art Antonio Palomino: “[…] Our Valdés was a great draughtsman, expert in perspective, architect and excellent sculptor.” 1 Valdés Leal was born in Seville in 1622 and received his initial training there with Francisco de Herrera the Elder. He lived in Cordoba in the 1640s and 1650s where he followed in the wake of the painter Antonio del Castillo in works such as the altarpiece for the Shod Carmelite church, for which he executed a series of oils that were, in his own words: “extremely well finished, in fine, clear colours, to the satisfaction of all men who were experts in art […], according to the modello and drawing that I have done.” 2 That work marked the end of his Cordovan phase and in 1656 he returned to his native Seville. In 1660 he entered the Academia de Pintura founded there by his master Herrera the Elder and Murillo, of which he would subsequently become president. The 1660s marked the height of the artist’s career, crowned by commissions that included one from the early years of that decade to execute a pictorial cycle which is among the most outstanding of Sevilian Baroque art. This is the cycle dedicated to Saint Ignatius of Loyola for the courtyard of the city’s principal Jesuit church, now the parish church of the Anunciación. 3

The cycle for the Jesuits, comprising around fifteen paintings, was funded by donations from the devout public, for which reason it can be assumed that Valdés Leal’s fees were not particularly high. This may explain why the quality of some of the works in the series, the majority now in the Museo de Bellas Artes in Seville, is somewhat variable. 4 However, this is not the case with the episode from the cycle with which the present drawing is associated, The Apparition of Christ to Saint Ignatius on the Road to Rome, which was particularly studied by the artist. For its execution Valdés Leal looked to the series of prints by Jean-Baptiste Barbé on The Life of Saint Ignatius of Loyola, published in Rome in 1609. Some of those prints are based on drawings by Rubens. The final canvas survives for this subject (fig. 1, Seville, Museo de Bellas Artes, 217 x 150 cm, inv. no. CE0192P), as does another, smaller canvas that could be the modello intended to be shown to the Jesuits (fig. 2, 130 x 100 cm, Germany, private collection), and the present drawing.

These compositions depict one of the most notable episodes in the life of Saint Ignatius of Loyola: the apparition of God the Father and Christ bearing the cross as the saint was travelling to Rome to obtain the pope’s confirmation of the Rule of the Jesuit Order which he had just founded. In their appearance, God and Christ confirmed to him that his proposal would be accepted by the pope.

The drawing, executed in black and red chalk, is relatively close to the composition of both the preliminary oil sketch and the final painting for the Jesuit church. There are some small differences, such as the fact that the background landscape behind Ignatius, in which a Jesuit is pursued by a man on horseback, is less developed in the drawing than in the final canvas, and that the long beam of the cross does not appear in the drawing but is present in the final oil. These are, however, minor details that do not affect the work’s overall composition, which is already perfectly defined in the drawing.

The combination of black and red chalk was habitually used by Valdés Leal in drawings intended to have a more finished appearance, for which this use of two colours was essential. It is also employed in Warrior with a Sword (Alcubierre Album) and The Vision of Saint Anthony of Padua (Hamburg, Kunsthalle). 5 The definition of the forms, the precise strokes and the painstaking detail indicate a fully defined drawing that presents the definitive composition for the painting. This sheet is thus an important example of the artist’s careful working method. In addition, few preliminary drawings by Valdés Leal for his pictorial cycles have survived.