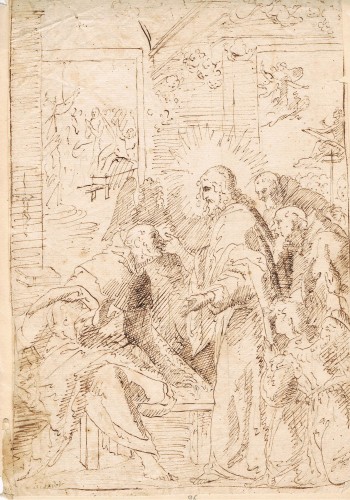 Vincent Ferrer was a Valencian Dominican monk to whom various miracles are attributed, leading to his canonisation in 1455, just thirty-six years after his death. From that moment he became the patron saint of both the city of Turia and the Kingdom of Valencia, with the consequent production of numerous depictions of him for private oratories, churches and religious houses in this region. The large number of images of Ferrer and of various episodes from his life mean that previously devised models were often reused due to their successful reception or as one more working or teaching method within artists’ workshops. This is the case with the present drawing.

Vicente Salvador Gómez was born in Valencia into a family of artists and at the age of just ten or twelve entered the studio of the most important Valencian painter of the day, Jerónimo Jacinto Espinosa, 1 whose style was principally influenced by Francisco Ribalta, the most successful Valencian painter of the early 17th century. In the late 1650s Gómez established himself as an independent artist and in 1663 received his first important commission, the creation of four large canvases on the life of Saint Vincent Ferrer for that saint’s chapel in the monastery of Santo Domingo. Two survive in situ: The Restitution of the Crown to King Ferdinand and Saint Vincent’s Prophesy in the Plaza del Born in Barcelona, both of vertical format and signed and dated 1665. 2 The success of this commission brought fame to the artist and over the following years he received many more, some of which also relate to the iconography of Vincent Ferrer, such as the now lost image of the saint commissioned by the Duke and Duchess of Segorbe in 1671, 3 or the principal painting for the chapel of the saint that was in the monastery of Santo Domingo. 4

Among surviving paintings by Gómez none depict the iconography of the present drawing, The Apparition of Christ to Saint Vincent Ferrer, although the drawing’s vertical format may reflect one of the paintings executed for the saint’s chapel in the monastery of Santo Domingo. Nonetheless, the similarity between this sketch and a work by Francisco Ribalta, and more specifically with the preliminary sketch for the final canvas, suggests that with the present sheet Gómez was in fact practising drawing through copying a work by another artist, a habitual method of training in artists’ studios. Ribalta had painted various works for the Colegio del Corpus Christi in Valencia, among them the canvas of 1605 for the principal altarpiece of the chapel of Saint Vincent Ferrer, depicting The Apparition of Christ to Saint Vincent Ferrer in the presence of Saint Dominic of Guzmán and Saint Francis of Assisi, which is still in situ (fig. 1). There is also a surviving drawing by Ribalta which relates to that canvas (fig. 2, Barcelona, Museo Nacional de Arte de Cataluña, inv. no. 6611-D). The fact that its composition is almost identical to the present work not only suggests that Gómez knew and admired Ribalta’s work but also that he had access to his drawings. A careful examination of the two sheets reveals that they share more elements in common than are to be found between Gómez’s drawing and Ribalta’s final painting. The gestures of the hands and facial expressions of the four figures, for example, are identical in the drawings but there are differences in the canvas, including Saint Francis’s gesture of raising his hand to his breast. In addition, Saint Vincent’s beardless face is the same in the drawings but is notably different in the painting, in which he is shown as younger and bearded.

Whether a learning exercise or a revision of Ribalta’s composition, this is probably a youthful creation by Salvador Gómez. Nonetheless, it already reveals his characteristic mesh of strokes created with delicate grey-brown ink and cross-hatched, parallel lines that produce the contrasts of light. 5 This would become the artist’s characteristic and recognisable technique, to be seen in other sketches from his mature period such as The Apparition of the Christ Child to Saint Anthony and The Immaculate Conception, both in the Museo Nacional del Prado (cats. D000191 and D002192).