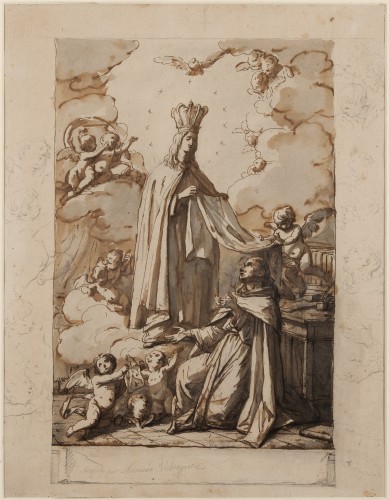 Saint Simon Stock was undoubtedly one of the leading figures of the Carmelite Order. Born in England in the 13th century, in 1247 he was elected sixth general of the Order and is considered to have transformed it from its original nature as a body of hermits to a mendicant one. However, tradition has it that the most important episode in his life was the apparition to him of the Virgin Mary on 16 July 1251. On that day Simon was praying to her to ask for some sign of protection for the Order, which had been obliged to move from Palestine to Europe. His prayer ran: “Flower of the Carmelites, flowering vine, splendour of the Heavens, fertile, only Virgin, peaceful Mother, unknown to any man, give favours to your Carmelites, Star of the sea.” 1 According to the description in the Flos sanctorum, the Virgin appeared in the company of numerous angels: “She came in all her grace wearing the Carmelite habit, her hair loose and an Imperial Crown on her head.” 2 In her hands she held a scapular, 3 which she gave to Simon Stock as a sign of protection from dangers and with the promise that anyone who died wearing it would not suffer the fires of eternal punishment.

The iconography described in the Flos sanctorum is exactly the one depicted in the present drawing. 4 The Virgin, in the centre, has her hair loose and wears the Imperial crown and the Carmelite habit. She is seated on a platform of clouds with a multitude of small angels around her. Kneeling at her feet is Saint Simon Stock with the scapular given to him by the Virgin above his head, which an angel assists him to put on. The drawing is executed in sepia ink with light, grey-brown washes. The composition is enclosed in a rectangle, outside of which the artist tried out in chalk some of the figures that he subsequently located in the central part. They include studies for some of the small angels and the saint’s hands. At the bottom, also in black chalk, is a faint suggestion of the cartouche with text that would accompany the final engraving, signed inside by the artist, Antonio González Velázquez.

Together with his brothers Luis and Alejandro, Antonio González Velázquez belonged to an important dynasty of Madrid painters of the second half of the 18th century. 5 Trained at the Real Academia de Bellas Artes de San Fernando, in 1746 his exceptional abilities earned him a study grant from the Academy’s Training Committee to go to Rome where he became a leading pupil of Corrado Giaquinto. In 1752 González Velázquez returned to Spain to execute the decoration of the fresco in the dome of the Holy Chapel in the Basilica of El Pilar in Zaragoza. The success of this work led to his summons to Madrid and ensured his entry to both the court and the Academy, where he was named first academician of merit (1753), then deputy director of painting (1767), and finally Director of that institution in 1787.

Between 1771 and 1773 González Velázquez embarked on a series of drawings intended for reproduction as a collection of prints to be engraved by Juan Antonio Salvador Carmona (1740-1805). The theme was The Saints of the Days of the Year and the publication went on sale at Bayló’s bookshop on calle Carretas. Both artists believed that this would be a profitable project but the only engravings printed were the ones for the thirty-one days of January and the first ten days of February. 6 For his preparatory drawings González Velázquez was inspired by the descriptions in the Flos sanctorum, as we see with the present sheet. However, the characteristics of the Flos Carmeli, which is larger and later in date – 1780, as stated on the print – suggests that this drawing was devised more as a devotional image than as part of The Saints of the Days of the Year. Furthermore, there are engravings after this drawing that exactly repeat it but have different accompanying texts (fig. 1). 7 The one illustrated here indicates that the print reproduces the sculpture on the high altar of the convent of the Shod Carmelites in Segovia, which was a free-standing, 18th-century sculpture by the Castilian School (fig. 2). Following the Disentailment of the Monasteries in the 19th century it was taken to the convent of the Barefoot Carmelites in the same city, where it can now be seen on the high altar next to a modern altarpiece. 8 Beside González Velázquez’s name on the print is that of the engraver, Manuel Salvador Carmona (1734-1820), brother of the above-mentioned Juan Antonio and possibly the leading Spanish academic printmaker. 9