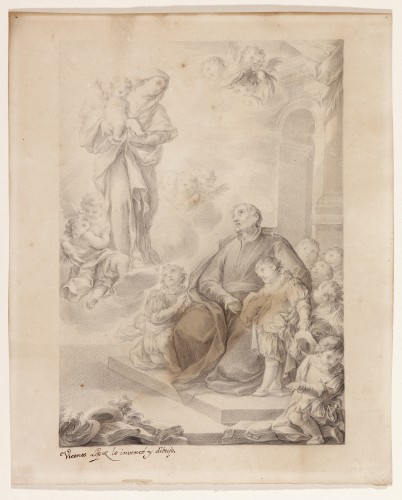 The Apparition of the Virgin and Child to Saint Joseph Calasanz

As noted in the previous entry, Vicente López was born in Valencia in 1772. In 1789 he was funded to travel to Madrid to study at the Real Academia de Bellas Artes de San Fernando. He returned to his native city in 1792, remaining there until 1814 when he was summoned to Court by Ferdinand VII. A highly prolific artist, López’s output encompasses almost all the pictorial genres: portraits, allegories, devotional scenes, etc., depicted in the form of canvases and mural paintings as well as numerous prints. In this regard it is important to bear in mind that many of the artist’s surviving drawings are preparatory designs for prints, which were subsequently executed by engravers of the stature of Vicente Capilla, Francisco Jordán, Fernando Selma and Tomás López Enguídanos, among others. Among the series of engravings based on drawings by López are The Apostles (c.1800-1805) and the Via Crucis (1798-1803). The unpublished drawing exhibited here depicts The Apparition of the Virgin and Child to Saint Joseph Calasanz and must have been preparatory for a now unknown print. It depicts the miraculous appearance of the Virgin and Child to the saint, who is seen kneeling on the right on the steps of a chapel visible in the background. Next to him a sizeable group of children reverently observe the miracle, watching the Virgin descend from heaven surrounded by an angelic choir.

Saint Joseph Calasanz was ordained in 1583. In 1592 he moved to Rome where he was spiritual advisor to the nephews of Cardinal Marco Antonio Colonna as well as giving catechism classes at the parish church of Santa Dorotea in Trastevere. There he became aware of the large numbers of orphaned and poor children living on the city’s streets and decided that he would primarily devote himself to them from that point onwards. He opened a small school in the buildings attached to the church of Santa Dorotea, and later, in 1612, the San Pantaleon school, which would become the parent house of the Clerks Regular of the Religious Schools (known as Piarists). In 1617 Joseph Calasanz obtained the approval of Pope Paul V to found a new religious community, that of the “Pauline Congregation of the Mother of God of the Piarist Schools”, based in the chapel of the Apparition in the church of Saint Pantaleon and constituting the first official community of the Piarists. The setting in the present drawing must be the interior of that chapel.

This sheet should be related to another of around 1808 that was formerly in the Argüeso collection. It depicts The Vision of Saint Joseph Calasanz (220 x 160 mm)1, and again shows a miraculous apparition in a chapel in which the saint, clothed in rich vestments, is surrounded by children. The detailed and elaborate depiction of the clothing of the figures seems to derive from Goya’s celebrated painting of Saint Francisco de Borja taking leave of his Family, painted in 1788 for Valencia Cathedral, where Vicente López could have seen it. The figure of the boy in the foreground presenting Saint Joseph Calasanz to the Virgin is a direct borrowing of the tearful child that descends the stairs in Goya’s painting. In addition, López may have been inspired by the print on the same subject by Juan Moreno Tejada, published in Madrid in 1772 (Madrid, History Museum)2.

With regard to the date of the drawing, it can be placed around 1800-1808 on the basis of a comparison with the sheet formerly in the Argüeso collection. It should also be related to another drawing by López with the same provenance, depicting Saint Joseph Calasanz, dated by José Luis Díez to around 1805 and subsequently engraved by Francisco Jordán3. These suggested dates are further supported by a comparison between the present drawing and other contemporary works by the artist. The typology of the Virgin, for example, is comparable to that seen in the painting of The Virgin of Mercies in the Fine Arts Museum of Valencia (c.1798-1803), and to the print of The Virgin of Succour of Orihuela (1804), in the National Library, Madrid.