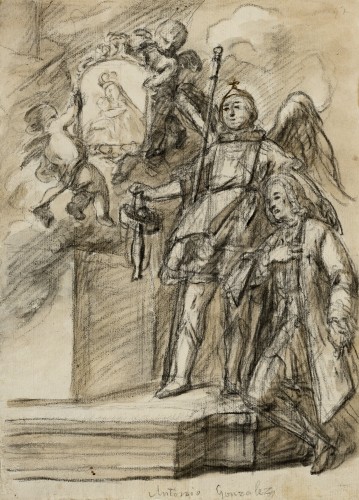 Son of the minor painter Manuel González Crespo, after the death of his parents Antonio González Ruiz left for Madrid at the early age of fifteen to try his fortune at court. He entered the studio of the landscape painter Michel-Ange Houasse, remaining there until the latter’s death in 1730. Two years later he decided to fund his own travels around Europe in order to pursue his studies and it was during this trip that his work assimilated the prevailing European academicism. González Ruiz returned to Madrid in 1737 and made contact with court circles through his decision to continue his training in the studio of the sculptor Giovanni Domenico Olivieri. In 1739 he married Antonia Palomino y Oropesa, daughter of the engraver Juan Bernabé Palomino, court engraver to Philip V. The marriage facilitated his first royal commissions and his appointment as painter to the king in 1744. 1 That same year González Ruiz became a member of the Preparatory Committee for the founding of the future Academia de Nobles Artes, where he would be appointed one of the two senior professors of painting, together with the French painter Van Loo.

Following the Royal Decree of 12 April 1752 that founded the Real Academia de Bellas Artes de San Fernando, González Ruiz was made one of the honorary directors of painting. He devoted the remaining thirty-six of his life to the Academia, becoming Director General from 1768 to 1771. His significant position at that institution and at court earned him a large number of commissions for portraits, a genre in which he revealed his early training with masters such as Houasse and Ranc, continuing their characteristically French orthodoxy in terms of iconography.

The present drawing is a sketch for the creation of a work that was possibly intended to be transferred to canvas. It represents the first idea for a complex composition with several figures. The agile, rapid drawing style, with a pronounced diagonal and vigorous, linear strokes is also evident in other sketches by González Ruiz, such as Study for a Portrait of a Writer or Jurist (Museo Nacional del Prado, cat. D003475) and Allegory of Time unveiling Truth (Museo Nacional del Prado, cat. D003474). These initial sketches, in which the artist aimed to define the principal lines of the composition, have another point in common with the present work, which is the signature in pencil, “Antonio González”. This was previously thought to be false but the presence of the same handwriting with the same calligraphic traits on all three sheets indicates that the artist signed his early sketches. This signature is quite different to the monogram “AG” to be found on González Ruiz’s more finished drawings.

The composition of the present sketch is structured around the figure of the Archangel Raphael. Standing in the foreground, he creates a link between the earthly realm in which the Knight of Calatrava is kneeling, and the heavenly one, where various small angels hold up a painting of the Virgin of Good Council. The figure of the Archangel is taken from a print by Juan Bernabé Palomino (fig. 1, Biblioteca Nacional, sign. INVENT/30065), González Ruiz’s father-in-law. In that work Raphael wears a crown and a dalmatic and holds a basket of bread and a fish in his right hand, a relatively common iconography in images of the Archangel associated with the Order of Hospitallers. The image in the print reproduces a sculpture in the Order’s monastery in Madrid, as the inscription indicates. The donor, shown kneeling and with his right hand on his breast, is a knight of the Order of Calatrava, as indicated by the cross on his breast. This figure is studied in another sketch now in the Museo Nacional del Prado which includes both an overall study of the figure and a detail of the face (fig. 2, MNP, D003478). All the above indicates the particular working manner of González Ruiz, who would produce several sketches of both the composition as a whole and of details of its figures as part of a detailed preparatory process for the final paintings.

The tradition of religious compositions that include the presence of a donor dates back to the medieval period and culminated in the Renaissance. Through these works donors sought the protection of their patron saints and solicited prayers after their death. It is interesting that González Ruiz returned to this tradition, which was somewhat archaic by the 18th century but which singles him out as an artist who assimilated a wide range of teachings and trends. 2