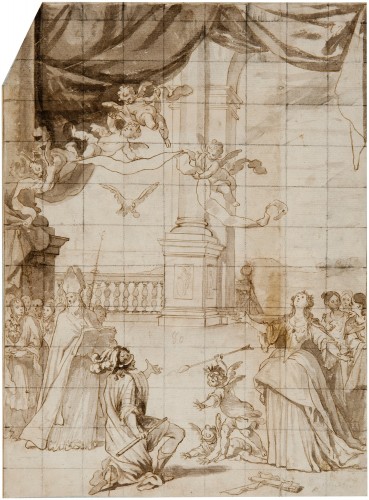 As an artistic personality, Matías de Torres reveals certain parallels with the history of Spanish drawing in general. Having been almost unknown as a draughtsman, a considerable body of work has now been attributed to him. The earliest monograph on the artist only referred to a wash drawing in the Albertina, Vienna, 1 whereas in the present day around twenty-five drawings have been assigned to his hand. This number will undoubtedly increase given that the artist’s early biographers referred to his “singular grace and facility” in drawing and to the existence of “numerous [drawings] by his hand in the private homes of members of the Court”, as well as many others used in the studios of his fellow artists.

It was this emphasis on drawing as a medium for learning and experimentation that allowed Matías de Torres to go beyond the relatively low status of “shop painter” to which his early training would seem to have destined him. Born in Aguilar de Campoo in the province of Palencia, he entered one of the more modest studios in Madrid at the time when the city was artistically committed to the introduction of the High Baroque style. Through attending academies and his acquaintanceship with Francisco Herrera the Younger, his pictorial style evolved and he consequently started to be associated with these Baroque circles. Matías de Torres was particularly renowned for his battle scenes, while his drawings for the traditional documents that provided proof of noble status brought him some prosperity although his final years were ones of extreme poverty.

The present drawing dates from the artist’s most successful and artistically active period. In 1679 he joined forces with Claudio Coello and José Jiménez Donoso to produce the temporary decorations for the Entry of Marie Louise of Orléans, first wife of Charles II of Spain. Coello and Donoso made use of Torres due to his previous experience in this field, for example, his notably successful decorations for the celebrations of the canonisation of Saint Rosa of Lima in 1671. In addition, the artist enjoyed the support of Herrera who was at that time Master of the Royal Works and who had previously employed Torres as part of the team that painted the chamber of the new queen in the Alcázar, Madrid.

Torres, Donoso and Coello shared the work on this remarkable decorative project for Marie Louise’s Entry, for which they contracted most of the artists in Madrid. Torres was principally responsible for the triumphal arch that was erected in the Puerta del Sol, constructed by the architects Francisco de la Torre and Sebastián de Benavente. It is now known from written accounts of the Entry 3 and from a print by the artist himself of the main façade of the arch. 4 The present, previously unpublished, drawing relates to one of the paintings that Torres executed for the arch. As a result of the print and of other known drawings the arch is the best visually documented element of the project. 5

The arch was dedicated to Religion and its association with the French and Spanish monarchies. This theme explains the choice of a subject rarely encountered in Spanish art, namely the conversion of the Merovingian monarch Clovis, King of the Franks. Clovis had promised his future wife Clothilde that he would convert to Catholicism if he won the battle of Tolbiac. In fact, Torres fused two iconographic traditions in an original manner. Firstly he allegorised the triumph of Divine over Profane Love so that Clovis is about to be pierced by the arrow of the former, which has defeated the cupid personifying earthly love. Secondly, he refers to the so-called miracle of the flask which occurred at Clovis’s baptism. Remigius, Bishop of Rheims, received the holy oils with which to anoint Clovis from a dove, as seen here, with the bird surrounded by angels and flying towards the prelate.

In the present drawing the artist emphasises the role of Queen Clothilde, who is presented as intercessor of the triumph of Faith. The scene should be interpreted as a parallel to The Imprisonment of Saint Hermenegildo, the first Spanish Visigothic king to convert to Catholicism. In addition to their religious connotations, the two scenes refer to the role of queen consorts in the early history of France and Spain, newly united through the marriage of Charles II. In order to convey these legendary events of the past to an audience of the day in late 17th-century Madrid, Torres emphasises the theatrical aspect of the composition and the bold gestures of the figures, which are partly based on theatrical tradition of the time.

With regard to its technique, this drawing is characteristic of Torres’s graphic style, 6 combining long, confident strokes of the pen with other shorter and more summary ones, as evident in the architectural details, the facial features and the small figures. The wash is subtly applied over these lines to add nuances of light and volume while emphasising the shadows in some specific areas. The latter are used for details and are only significantly evident in the ample drapery that closes the scene in the manner of a great stage curtain. The squaring up indicates that this drawing was used as the basis for the final canvas or possibly for its reproduction as an unidentified print.