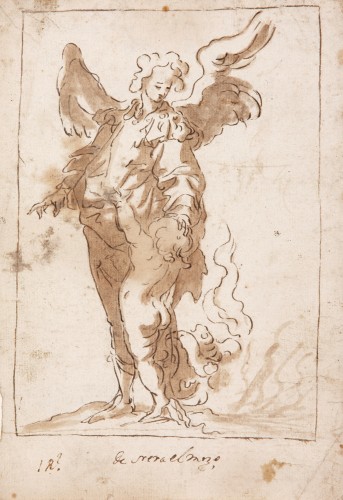 Francisco Herrera el Mozo [the Younger] was born in Seville in 1627. He initially trained with his father, the painter Francisco Herrera the Elder (ca.1590-1654), from whom he learned the rudiments of painting. In 1649 he moved to Rome to further his studies where, according to Antonio Palomino, he worked “with great application, on academic studies as well as [copying] the famous sculptures and eminent works in that city; as a result of which he became not only a great painter but also a highly accomplished architect and expert in perspective.”1 The exact date of Herrera’s return to Spain is not known but he was present in Madrid in 1654 when he signed the contract for the paintings for the main altarpiece of the Convent of the Barefoot Carmelites. He subsequently returned to Seville where in 1656 he painted The Triumph of the Sacrament (Seville Cathedral) and founded the Academia Sevillana with Bartolomé Esteban Murillo. In 1663 he was summoned to Madrid by Philip IV to paint the (now lost) frescoes for the church of Nuestra Señora de Atocha. From that point on he attempted to obtain the position of Painter to the King, finally succeeding in 1672 and subsequently rising to further posts within the palace system. In 1674 Herrera designed the Hospital de Montserrat in Madrid, while between 1680 and 1682 he lived in Saragossa. Herrera died in Madrid on 25 August 1685 and was buried in the parish church of San Pedro.

The present drawing depicts the Guardian Angel. It is executed in pen, using precise, light strokes that are softened through the application of delicate sepia washes. While the technique is simple, the elegance of the figures and the use of curving lines create a notably dynamic feel.

Iconographically, the Guardian Angel is one of the leading figures within the hierarchy of angels. The cult of this figure first arose in the early 16th century and reached its peak in the following century. The importance of this Angel lies in its role as protector of souls along the pathway of life. The iconographic model derives from that of the Archangel Raphael accompanying Tobias, although the child-soul is generally depicted as younger (as in the present drawing) and lacks any type of identifying attribute. This iconography was particularly disseminated through prints and the present drawing can be related to the series of engravings entitled Angelorum Icones published by Crispijn de Passe and Gerard de Jode in the first half of the 17th century.

The present drawing can be closely associated with three others by Herrera el Mozo in the Hispanic Society of America, New York, the Galleria degli Uffizi, Florence, and the National Library, Madrid.2 They depict the Archangel Raphael, although this figure has erroneously been identified as the Archangel Sealtiel3. The three drawings, of which the one in New York is the most highly finished and the finest with regard to quality, are successive phases in the design of a single painting. In addition, the New York sheet has exactly the same composition as the present one, with the slim, elegant figure in the centre, framed by a hand-drawn border in ink. At the lower left is the inscription “1 RI. de rera el mozo”, which is identical to the inscription on the Hispanic Society drawing. The attribution to Herrera is also confirmed by a comparison with the drawing in the National Library. Finally, both the reverse of the New York drawing and that of the present one have the inscription “Joseph de Santo”, as well as the date “1670” in the case of the New York sheet. These inscriptions seem to refer to the first owner of the drawings, who would have been a contemporary of Herrera. Bearing in mind that the Hispanic Society sheet was acquired from the Casa Torres collection in Madrid4, it is reasonable to deduce that the present drawing also has that provenance.

Both the present drawing and the other three referred to above can be related to the paintings executed by Herrera for the Convent of the Barefoot Carmelites in Madrid. Documents in the Archivo de Protocolos de Madrid published by María Luisa Caturla allows us to know that in 1654 Herrera signed the contract for the paintings for the main altarpiece of the convent5. Of this commission, the only work to survive today is the splendid Triumph of Saint Hermenegild (Madrid, Prado Museum), however, it is known that Herrera painted various Archangels and a Guardian Angel, as the documentation published by Caturla reveals: “In the four openings in the pedestals of the columns the Archangel Michael must be located in the opening on the left side looking towards the church // with the Archangel Gabriel in the corresponding opening of the other column // and the Archangel Raphael in the opening in the pedestal located on the left side looking towards the Sacristy // and the Guardian Angel opposite this figure”6.

It can thus be surmised that the present sheet is a preparatory drawing for one of the canvases in the altarpiece of the Convent of the Barefoot Carmelites in Madrid.

[3] Juan Carmona Muela, in Iconografía Cristiana. Guía básica para estudiantes. Madrid, Itsmo, 1998, p. 69, notes that the attributes of the Archangel Raphael are the fish and the incense burner: “This figure was identified with the Angel ‘with the golden censer’ in Revelation 8, 3, explaining the attribute of the incense burner in which the fish’s entrails were kept”.