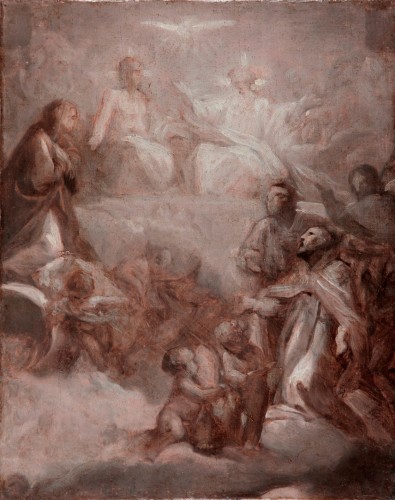 The Holy Trinity in Glory

Anton Raphael Mengs was the most famous and esteemed of all Neo-classical painters and the one who exercised most influence on his contemporaries. Mengs was born in Aussig (Bohemia) in 1728 and began his studies with his father, Ismael Mengs. In 1741 he travelled to Rome to complete his artistic education. There he spent most of his youth until 1761 when he was summoned to Spain by Charles III to work on the decoration of the Royal Palace in Madrid. Mengs was appointed Court Painter and exercised a notable influence on Spanish artists, both those working for the Court such as Maella, Bayeu and even Goya, and those studying at the Real Academia de Bellas Artes de San Fernando. Without doubt, Mengs’ work constituted the artistic paradigm to be followed. During the course of the nearly twelve years (from 1761 to 1769 and 1774 to 1776) that the artist was in the service of the Spanish monarch he painted various frescoes for the new royal palace and for the palace at Aranjuez, a considerable number of religious paintings and a very large number of portraits of the monarchy and the nobility, perfectly capturing the appearance and character of his sitters. In 1776 Mengs returned to Rome where he died in 1779.

In 1767, during the artist’s first period in Madrid, the Jesuits were expelled from Spain on the grounds of their excessive political and economic influence. On 2 April Charles III signed the Pragmática Sanción written by Pedro Rodríguez de Campomanes, Prosecutor to the Council of Castile. 2 This document ratified the suppression of the Jesuit Order in all Spanish territories and authorised the embargo of their possessions. One year later, in 1768, Charles III decided to transform the church of the Imperial Seminary, dedicated to Saint Francis Xavier and the building most symbolic of the Jesuits in Madrid, into a church dedicated to Saint Isidro Labrador, patron saint of the city and court of Madrid. In 1769 the saint’s remains were brought there from the chapel of San Andrés in Madrid, together with those of his wife, Saint María de la Cabeza. Their remains become objects of veneration in the church. In addition, building work was undertaken to make the collegiate church appropriate to its new function. The presbytery was transformed through a design by the architect Ventura Rodríguez (1717-1785), which completely changed the high altar through a new decorative scheme, although retaining the volumes and constructional elements of the previous design. It was at this time that it was decided to replace the painting of Saint Francis Xavier by Francisco Ricci located at the top of the high altar with another, more suitable one. This decision is set out in a letter of January 1769: “In the second storey of the altar is a painting measuring 23 feet high by 13.5 wide [approx. 644 x 378 cm] depicting S. Francis Xavier baptising Jews; a rather commonplace painting and out of date […] and I considered it appropriate that don Antonio Mengs should see it, and in accordance with this don Ventura Rodríguez stated that it would not serve as it was in such bad condition as well as being inappropriate and not in harmony with the others in the altarpiece or with their meaning. For this reason it has been necessary to commission Mengs to paint another of the Throne of the Holy Trinity, with the Immaculate Conception below it on the right and on the other side Saint James, Saint Lawrence and Saint Damasus positioned as if receiving the Holy Throne as it ascends to heaven; and I consider it most appropriate. The painting is typical of the artist and I hope that it receives general approbation and attracts attention from the public for its magnificence and gravity.” 3 The painting was thus commissioned from Anton Raphael Mengs, who painted his only altarpiece not executed for the royal family and thus accessible to the public. The canvas was completed in just forty days, suggesting that workshop involvement was required. 4 Mengs charged 60,000 reales that were paid to him by the Count of Campomanes, one of the key figures in the expulsion of the Jesuits from Spain, as noted above. 5

Mengs’ canvas was destroyed, along with much of the church, in a fire in 1936 during the Spanish Civil War. The general appearance of the painting has been known up to now from two paintings that depict the overall appearance of the collegiate church of San Isidro, namely the Meeting of the Grand Chapter of the Military Orders for the Investiture of Alfonso XII as Master of the Order, painted in 1857-1858 by Joaquín Sigüenza, and High Mass in the Cathedral of Madrid by Joaquín Muñóz Morillejo of 1921. 6 The altarpiece was restored by José Lapayese Bruna on the basis of these two paintings and using the fragments that survived the fire 7 and a model was also made of it, now in the Museo de San Isidro (inv. no. 6600). Both are relatively faithful reproductions of the original altarpiece, including the painting on the top storey. In addition, a drawing by the circle of Mengs has recently come to light that represents the final phase of the design of the composition before it was translated to canvas. 8

The present drawing is a previously unpublished design by the artist for The Holy Trinity in Glory. It is a small oil on paper, laid down on canvas and painted in grisaille with light touches of earth pigment that allow the underlying paper to show through. This rather unusual technique was referred to by Ceán, who stated when discussing Mengs’ drawings, that: “He made drawings in all different ways, with black and red chalk on white paper, dark and blue paper, with the assistance of white lead. He made them with India ink, in pastel and in tempera […]”. 9 Ceán’s words offer proof of the wide-ranging artistic knowledge and abilities of Mengs, who was able to work in all known pictorial styles and techniques.

The present work is a preliminary study for the large painting executed for the collegiate church of San Isidro and largely corresponds to the design of the final painting. It is organised over three levels. In the upper part, seated on a throne of clouds and within a heavenly space, are God the Father on the right, Christ on the left and the Dove of the Holy Spirit between them. On the left, on an intermediate level is the Virgin Mary, alone slightly raised up to make her stand out and to place her closer to God. On the right on this level are three Spanish saints: Damasus, kneeling, Lawrence, immediately behind him, and Saint James the Apostle in the background. Finally, towards the bottom of the composition, in the third level, are two small boys with the pontifical symbols of the triple papal tiara and the keys of Saint Peter, supreme head of the Catholic Church. The intention of the painting, installed at the top of the high altar of Saint Isidro, was thus to symbolise the commendation and protection enjoyed by the patron saint of Madrid from the papacy, the leading Spanish saints, the Virgin Mary and the Holy Trinity.

For the conception of his work Mengs was clearly inspired by Titian’s Glory, one of the masterpieces in the Spanish royal collection. It was commissioned by Charles V in the mid-16th century and during the reign of Charles III it hung in the Aula Moral in El Escorial. Mengs’ debt to Titian is clearly evident, for example, in the organisation of the composition into three levels, the general sense of a celestial apotheosis and the placement of the figures. Thus the Trinity that presides over the composition and the figure of the Virgin occupy the same position in both works, while the Spanish saints in Mengs’ painting occupy the same position as the members of the imperial family who are located on the right in Titian’s work. Mengs almost literally borrowed the kneeling figure of Charles V, who heads the group of members of the Imperial Habsburg family, for his figure of Saint Damasus.

[4] Roettgen, Steffi, “Devout lugubrious events. Los cuadros religiosos de Mengs para Carlos III” in El arte del Siglo de las Luces. Barcelona, Galaxia Gutenberg, Fundación Amigos del Museo del Prado, 2010, p. 235. It is known that Mengs ran a large studio that he made use of for the execution of most of his works. The artist created the models and the overall lines of many of his paintings, which were subsequently developed by his pupils, while he made the final retouchings. Given the short amount of time in which he painted the altarpiece for San Isidro, it is likely that this procedure would have been followed.

[12] “To complete the whole, on the second storey a large painting was installed by don Antonio Raphael Mengs depicting a glory with the Holy Trinity: on one side, Our Lady, and below, Saint Damasus, Saint Lawrence and other Spanish saints”. Ponz, Antonio, Viaje de España. Madrid, 1772-1794 [Madrid, Aguilar, 1947], p. 435.