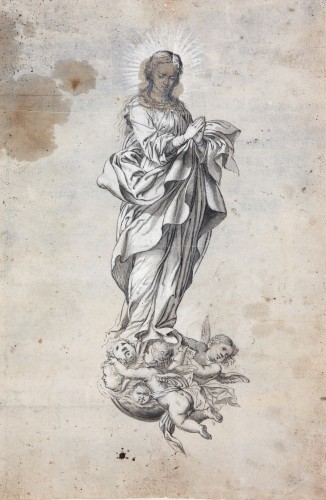 The frequent depiction of the Immaculate Conception in 17th-century Spain can be seen as a responding to a desire to defend the cult of the Virgin and her virginity against Protestant doubts. 1 Stylistically, depictions of this subject evolved in parallel to the general evolution of 17th-century art. Thus, in the first third of the century such images were characterised by a restrained, tranquil mood with the Virgin presented as a static, frontal figure. In the second third of the century, however, a new approach showed her as advancing forward majestically with a suggestion of upward movement in the draperies. Finally, in the last third of the century the figure of Mary soared upwards, enveloped in dramatic movement and colour in a response to the ecstatic nature of the late Baroque.

The present drawing depicts The Immaculate Conception. From its style and particular characteristics, with the figure in half-profile and standing on a cloud of cherubim’s heads, the hands joined in prayer and swathed in an ample mantle, it can be dated to the second third of the 17th century. More specifically, the iconography and aesthetic approach make it possible to associate it directly with the work of Alonso Cano, one of the great painters of the Immaculate Conception. Throughout his career Cano revealed a unique ability to embody the precepts set down by the painter and art theoretician Francisco Pacheco who, in his Arte de la Pintura, specified how the Virgin of the Immaculate Conception was to be depicted: “she must be in the flower of her youth, a beautiful girl, lovely, grave eyes, perfect nose and mouth and rosy cheeks, her beautiful hair spread out and the colour of gold […]. She must be painted wearing a white tunic and blue mantle [and be] crowned with stars; twelve stars forming a bright circle between glowing light, with her holy brow as the central point.” 2

Cano’s Immaculate Conceptions evolved in parallel to his work as a whole but always remained faithful to Pacheco’s precepts. They range from his most static depictions of the early 1620s, such as the one in a private French collection, 3 to those from the end of his career, which convey the greatest sense of movement, including the ones painted for the cathedrals in Granada (c. 1662-1663) and Vitoria (Alava, Museo Diocesano), the latter of around 1650, in addition to his celebrated sculpture on this subject for the lectern in Granada cathedral (c. 1655). The present sheet is most closely related to these late works by Cano. The figure and the hands, both of which incline slightly to one side, the drapery with its ample folds that completely envelop the figure, the retinue of small angels that create the Virgin’s pedestal, and above all the figure’s hard, slightly challenging gaze are all to be found in the above-mentioned works by Cano and the present sheet. All these characteristics suggest that this drawing is based directly on a work by the artist. However, the inflexible line, inhibited approach to the creation of form, preciseness of the details and the use of black ink and white wash suggest that the drawing is not by Cano himself but rather by an artist of the Granada school, which repeated Cano’s models to the point of exhaustion.

Alonso Cano’s return to Granada in 1652 attracted numerous artists to the city who hoped to study with him. Most of them faithfully copied his models, as a result of which the traits that characterise the Granada school are those evolved by Cano himself. Nonetheless, some of these artists revealed a preference for Flemish painting, particularly Pedro de Moya (1610-1674), while both trends are to be seen in the present drawing. Painters of the Granada school who combined these two tendencies include Juan Niño de Guevara (1632-1698), a pupil of Cano and imitator of his Virgins, Juan de Sevilla (1643-1695), and José de Cieza (1652-1692), whose works reveal the marked influence of Flemish landscape painting. Only a few drawings can be securely attributed to Juan Niño de Guevara, including The Virgin lactans in the Museo del Prado and The Virgin and Child in the Apelles Collection. 4 Although the figure types are comparable to those in the present drawing, Guevara’s lines are less sculptural although still well defined. There is a signed drawing of The Immaculate Conception by Juan de Sevilla in the Biblioteca Nacional (inv. no. 15/2/29), which is a preparatory sketch for his painting of that subject now in the Meadows Museum (inv. no. MM.67.13). Sevilla’s drawing can be compared to the present sheet in the way that it also offers a simple, highly sculptural depiction with the Virgin alone on her pedestal of angels. However, the forms are softer and less severe than those to be seen here. 5 With regard to the other Granada school artists, almost no known drawings have survived.

The sculptural forms evident in this sheet suggest that it may be the work of a sculptor rather than a painter. This is evident if it is compared to carved wooden sculptures by José de Mora such as The Immaculate Conception (Granada, church of Santos Justo y Pastor) or the sculpture on the same subject by Pedro de Mena in the Palacio Arzobispal in Granada, both of which are inspired by Alonso Cano’s sculpture of The Immaculate Conception made for the lectern in Granada cathedral. Shared features include the extremely precise definition of the figure of the Virgin and the pronounced contrasts of light and shade that give this image a particularly three-dimensional nature. If this hypothesis is correct, this drawing is one of the very few known 17th-century preparatory sketches for a sculpture by an artist from Andalusia and more specifically from Granada.

[1] On the cult of the Immaculate Conception in Spain and its depiction in Spanish art, see the fundamental study by Stratton, Suzanne, “La Inmaculada Concepción en el Arte Español” in Cuadernos de Arte e Iconografía, vol. I, no. 2, 1988, pp. 3-128.