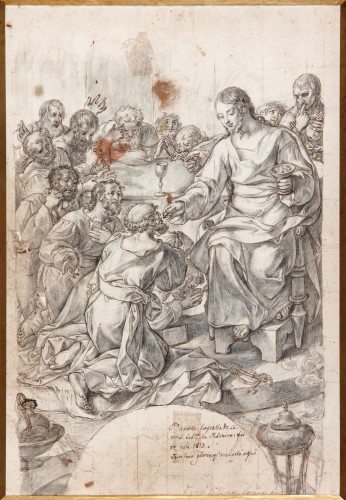 Cyrillo Volkmar Machado was born in Lisbon on 9 July 1748 at a difficult moment for Portuguese art, which found itself at a transitional point between the Pombaline period and the onset of the Neo-classical period. During his early training he made a careful study of both drawing and colour. In order to deepen his knowledge of painting Volkmar Machado decided to travel to Rome, passing through Evora and Seville on the way. In the latter city he made contact with the Escuela de Nobles Artes [School of Noble Arts] directed by Juan del Espinal, where he studied geometry. In Rome, Volkmar Machado took lessons with leading masters before returning to Lisbon in October 1777. Immediately after his arrival he worked on the University of Coimbra building, which was currently being built and decorated. Volkmar Machado gradually made his way in the Portuguese art world and was a highly prolific designer of architectural projects and theatrical sets. He also became known as a fresco painter through his work on the palace of the Marquesa de Bella, and above all through his ceiling paintings for the royal palace at Mafra, which in 1796 earned him the title of Painter to his Majesty. However, Volkmar Machado would become best known to posterity through his activities as an historian of Portuguese art. 1 His book Colecçao de memòrias relativas às vidas dos pintores, e escultores, arquitetos e gravadores portugueses, e dos estrangeiros, que estiveram em Portugal 2 was a compilation of all the known information on artists currently available in Portugal at that time.3 The project led him to be known as the “Portuguese Pilkington” or the “Portuguese Ceán Bermúdez”. Volkmar Machado in Lisbon died on 23 April 1823 at the age of 74.

The present drawing is one of the studies that the artist executed for the main altarpiece in the chapel of the Holy Sacrament in the church of Sao Sebastião in Pedreira, Lisbon. In 1811 the Confraternity of the Holy Sacrament attached to that church decided to found a new chapel for the worship of the cult and to embellish the church. Volkmar Machado must have received the commission in 1812, once the construction of the chapel was underway. 4 The chosen subject was The Last Supper and the artist made various preparatory sketches for its design and composition, of which two are now in the Museu Nacional de Arte Antiga (MNAA) in Lisbon, while the third is the present sheet.

The first preparatory study (MNAA, inv. no. 1960) is dated 1812 and includes the principal features of the final composition. The Apostles are grouped around a circular table in a monumental architectural setting. Christ is standing in the right corner administering communion to one of his followers. The figure of Christ is also the principal motif in the second drawing for this project, executed in 1813. The composition has now been completely altered and Christ is seated, administering communion to Saint Peter (MNAA, inv. no. 1761). The present sheet is the last study by Volkmar Machado for the altarpiece and the one that functioned as the model for the finished oil on canvas. It combines elements from the two previous drawings, but is far more detailed and highly finished. Christ is seated on a raised, throne-like chair at the centre right, with the twelve Apostles grouped around him at a circular table. The Apostles reveal a wide range of physical types and poses. Towards the lower part of the composition is an empty semicircle indicating the location of the ciborium. On one side of this semicircle are the ewer and basin used for washing the Disciples’ feet in the ritual that Christ established prior to Communion. Finally, in the lower right corner is an incense burner symbolising the death of Christ and hence his sacrifice for the salvation of mankind. The drawing is an exact model for the final composition painted for the church of Sao Sebastião aside from two details: the absence of the glory of angels in the upper part, which is not included here, as the artist notes in the inscription; and the architectural structure on the left side, the addition of which makes the final painting heavier and less clear than the drawing. The painting was completed in 1814 and is dated and signed “1814 CVM”.