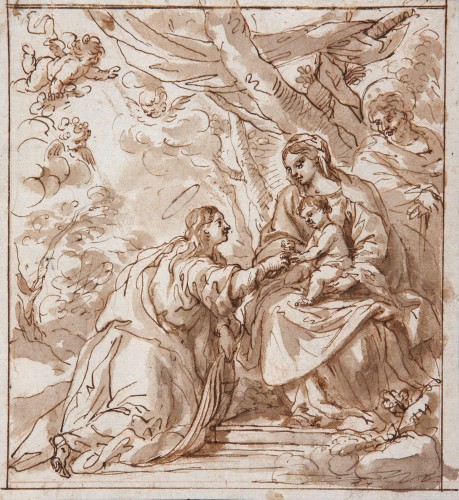 The Mystic Marriage of Saint Catherine of Alexandria

The 17th century is considered the Golden Age of Spanish painting while in Madrid the most active and creatively vibrant period was the second half of that century. The presence of the Court, where both the monarchy and aristocracy were assembled, encouraged large numbers of artists to travel and settle in the city, either to pursue their training or to try their luck in the dynamic atmosphere of court life. This situation would result in the appearance of a coherent group of artists of similar training and sensibility whose principal source of reference was the Italian tradition of El Escorial, enriched by the Baroque style of Rubens and a renewed interest in the great 16th-century Venetian masters. We thus encounter a number of figures of outstanding abilities such as Juan Carreño de Miranda, Francisco Rizi and Claudio Coello. A series of artists either trained with them or were associated with their circles, producing work that was at times so similar to theirs that attributional problems have persisted to the present day.

This is the case with the present drawing. It depicts The Mystic Marriage of Saint Catherine of Alexandria, a legendary episode in the saint’s life that first appeared in the Middle Ages although it is not to be found in the Golden Legend by Jacobus de Voragine (13th century). 1 Tradition has it that Saint Catherine was the daughter of a Samaritan prince and a Sicilian queen. At the age of eighteen she remained unmarried as she was considered too beautiful and intelligent for any mortal man. The hermit Ananias thus suggested a spouse superior to any man on earth. Catherine asked to meet him before the marriage and Ananias told her that she should evoke the Virgin that night in her room. The Virgin appeared to Catherine with the Christ Child, offering him in marriage. Catherine accepted but the Christ Child refused, saying that she was too ugly, and the vision disappeared. Catherine was distraught as she had believed herself to be the most beautiful woman on earth. Ananias, however, told her that her body was beautiful but her soul was not as it was filled with pride, arrogance and paganism. The hermit proposed converting her to Christianity and baptising her to purify her soul so that her divine spouse would accept her. Catherine thus converted and when she once more invoked the Virgin, the Christ Child accepted her, saying: “Now I do indeed love you as you have become a pure and beautiful maiden”. They were mystically joined in marriage, exchanging wedding rings. 2 The present drawing depicts the moment of union, which is the episode from this saint’s life most frequently depicted in art.

Saint Catherine is located on the left, kneeling on a dais and holding out her right hand to the Christ Child. He is sitting on his mother’s lap, while the Virgin is seated on the dais on a higher level than the saint. Behind the Virgin is Saint Joseph, observing the scene from the middle ground. The entire episode is set in a landscape that includes various small angels in the sky and a large tree with v-shaped branches over which is hung an ample curtain. The same composition, albeit including more elements, is to be seen in various paintings of this subject by Mateo Cerezo (Museo del Prado, inv. nos. 659 and 7716, and Palencia cathedral). 3 Even the elegant gesture of the saint’s hand as she allows the palm to fall on the steps of the dais is identical in both compositions. Despite such evident similarities, it is clear that the technique of this drawing, with its light, preliminary lines of red chalk over which the artist has applied pen and wash, has nothing in common with surviving drawings by Cerezo, which are executed in black or red chalk and deploy more rapid, nervous strokes.

The use of red chalk combined with pen and wash to create solid, well defined volumes is to be found in the work of artists such as Francisco Rizi and his pupil Claudio Coello. In fact, the rapid but firm line of the pen and the expression of the figures, with their lively eyes and bracket-shaped lips, are similar to those found in various drawings by Rizi. Examples include The Holy Family (Museo del Prado, D-6006), The Virgin and Child with Saints (Uffizi, Florence), 4 and Jupiter’s Gift to Pandora (Valencia, Museo de Bellas Artes), the latter designed for the fresco in the Salón de los Espejos [Hall of Mirrors] in the Alcázar in Madrid. Nonetheless, the more highly finished nature of the present drawing does not exactly correspond to Rizi’s style. For all the above reasons it has been decided to attribute this drawing to a Madrid artist close to Rizi and a member of what Pérez Sánchez described as the “first generation” of fully Baroque artists who were born between 1610 and 1620 and whose careers lasted into the 1680s.

[4] This is the preparatory drawing for the canvas on the same subject painted for the Capuchin monks at El Pardo. Another similar but more finished drawing is in the Instituto Valencia de Don Juan in Madrid.