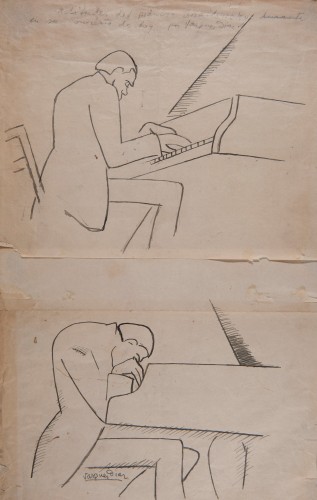 The Pianist Brailowsky in performance

A note lingers in the air. A sweet melody rings out clearly, perfectly and harmoniously. Suddenly the gentle sonority increases in tone, becoming ever more intense and rapid. The performer shifts from a relaxed, comfortable position and leans over the keyboard in his endeavour to convey all his power and mastery over the notes of the piano. So much so that he seems to fuse with the instrument, and it is difficult to know where the man ends and the structure of the piano beings. A Nocturne by Chopin is to be heard in the auditorium, played by the most important pianist of the interwar period, the Ukrainian Alexander Brailowsky (1896-1976). 1 Meanwhile, in the audience, the Spanish painter Vázquez Díaz, visiting Paris in the 1920s and avid to learn, conveys the very essence of the concert in four summary strokes mid-way between Realism and Cubism. The two drawings presented here offer a marvellously simple reflection of one of Brailowsky’s concerts that took place in 1924. During that year and over the course of six days the pianist performed all 160 works composed for the piano by Frédéric Chopin.

In these drawings Vázquez Díaz reveals his enormous abilities as an illustrator and portraitist, traits that would always be evident in his work. Deploying a rapid, precise and confident stroke and making use of just a few lines, he not only defines the figure but also tells a story and one in which we can still detect the notes of Chopin’s music and the passion of the pianist’s performance. Never have so few lines enclosed such sonority, in the manner of a musical box.

Above all, Vázquez Díaz’s drawings and oil paintings reflect the passion of a man who was on the point of becoming a professor of business studies until he moved to Madrid in 1903 to dedicate himself entirely to painting. There he began to make copies of works in the Museo del Prado and met artists such as Solana, Darío de Regoyos and Juan Gris, becoming a friend of the latter. 2 In 1906 he moved to Paris where he became a pupil of the sculptor Antoine Bourdelle (1861-1929), also meeting Picasso, Braque and Modigliani. The influence of these figures and of his friend Gris opened his art to Cubism and from this date onwards his works make use of rigorous, solid, constructed planes. In 1918 Vázquez Díaz returned to Spain and settled in Madrid where he combined his artistic endeavours with teaching, giving classes in his studio and at the Escuela de Bellas Artes de San Fernando. His work places particular emphasis on portraits, a genre that he practised from the outset of his career. 3 These images look to reflect the soul of the sitters and are devoid of any anecdotal detail. The influence of Cézanne is clear, resulting in hieratic figures of a sculptural, volumetric nature. Among Vázquez Díaz’s most illustrious sitters were Solana, the brothers Pío and Ricardo Baroja, Manuel de Falla, Ignacio Zuloaga and the writers Juan Ramón Jiménez and Miguel de Unamuno. Still life and landscape were other genres in which Vázquez Díaz combined Realism and Cubism, an approach evident, for example, in canvases such as Factory in the Mist (Bilbao, Museo de Bellas Artes) and in numerous landscapes of Fuenterrabia where the artist spent his summers. Nonetheless, among Vázquez Díaz’s most notable creations are the mural paintings that he executed between 1927 and 1930 for the monastery of La Rábida in Huelva. Depicting The Discovery of America, they illustrate the preparations for Christopher Columbus’s journey to that continent. From this period onwards Vázquez Díaz would be honoured with numerous prizes and honours. In 1951 he won the Grand Prix of the Hispano-American Art Biennial, in 1954 he was awarded the Medal of Honour at the National Fine Arts Exhibition and in 1968, one year before his death, he was made a member of the Real Academia de Bellas Artes de San Fernando.
[1] Brower, Harriette, Piano Mastery: The Harriette Brower Interviews. Dover, 2003, p. 224.