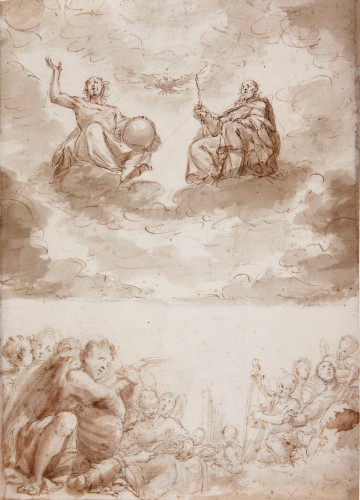 The Trinity and Musical Angels

There is every reason to suggest that this is another drawing by Antonio de Pereda. The composition involves two clearly differentiated scenes. In the upper part is a depiction of the Trinity while the lower part features a group of musical angels. The technique used in the two areas is also different. The depiction of the Trinity uses red chalk, pen and wash. In this scene the figures of God the Father and Christ are defined using very thin lines of red chalk for the outlines, which have subsequently been gone over in pen and brown ink to add greater detail to the bodies and the draperies. Using the same pen the artist also executed the Dove of the Holy Spirit and the clouds that frame the scene, drawn with rapid strokes. Finally, he used a brush with brown wash to define both the volumes and the light and shade. This first scene is clearly separated from the lower one by a faint diagonal line drawn in black chalk at the point where the clouds come to an end.

The lower part of the drawing depicts a group of musical angels. The figures are sketched in with black chalk over which the artist has applied sepia ink with a pen followed by sepia wash. The difference in the techniques in the two scenes may be due to the fact that the artist reused the same piece of paper, which would imply that the two drawings were for different purposes and even that they were executed at different times. Thus the first one would be the Trinity and the second one the scene of the angels. In fact, the black chalk used to separate the two scenes is similar to the one used to depict some of the angels.

From a formal viewpoint, this is a Madrid drawing of the mid-17th century, possibly by Antonio de Pereda. With regard to its technique, the upper scene perfectly corresponds to his method of drawing. The use of red chalk as a base over which pen and brush are applied can be seen in other drawings by the artist such as Tobias healing his Father in its two known versions (Madrid, Casa de la Moneda and José de la Mano Galería de Arte), and in the Pietà in the Academia de San Fernando, Madrid. It can also be related to some of his paintings, for example the canvases of The Trinity (Carmelite convent, Madrid, and Budapest Museum), 1 and above all, The Apotheosis of the Jesuits before the Trinity in the cathedral church of Guadalajara, which has certain similarities to the present work. 2

The second scene is more difficult to place, primarily due to the differences between the technique and composition in relation to the Trinity. However, the use of a black chalk base over which the artist applied the sepia wash with a brush is also characteristic of drawings by Pereda, for example The Visitation (Uffizi, Florence) and God the Father (Jacques Petit Horry, Paris). 3 Pérez Sánchez referred to the variety of techniques to be found in Pereda’s drawings, in which his lack of interest in the outlines and his use of dense areas of wash also reveal the influence of Italian painting in his work. 4 As a result, the technical differences between the two scenes on this sheet only serve to support the attribution to Pereda.

Similarly, the models used for the group of musical angels are certainly typical of Pereda. Similar angels to the present ones can be found in other drawings and paintings by the artist, for example, the figures in The Marriage of the Virgin (church of Saint Sulpice, Paris) and above all in The Trinity and the Holy Family with Saint Augustine and Saint Teresa in the Carmelite convent in Toledo. 5 With regard to drawings they can be seen in The Virgin presenting the Chasuble to Saint Ildefonso in the British Museum, London. 6 The faces of the angels in the present drawing, with their markedly oval faces and lively, individualised expressions, are highly characteristic of Pereda and thus once again support an attribution to his hand.

This drawing should probably be dated around 1650-1660 given the degree of technical mastery and the similarities to be seen with paintings such as the one in the cathedral church in Guadalajara, as well as with drawings such as The Virgin presenting the Chasuble to Saint Ildefonso in the British Museum.