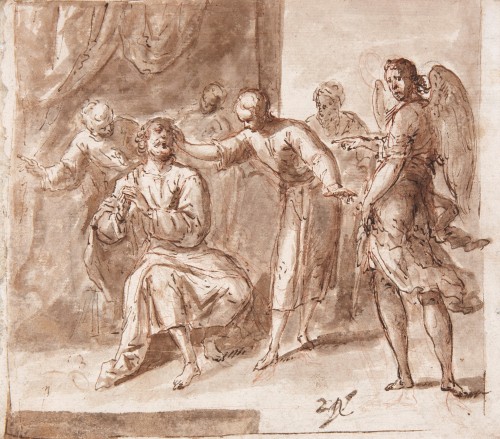 Antonio de Pereda was born in Valladolid in 1611. The son of a modest painter, he soon left for Madrid to train in the studio of Pedro de las Cuevas, 1 among whose other pupils were some of the most important Madrid painters such as Francisco Camilo, José Leonardo, Juan Carreño and Juan Montero de Rojas. Pereda’s work also reveals the assimilation of motifs and compositions by other artists including Vicente Carducho, Angelo Nardi and Eugenio Cajés.

Pereda’s exceptional gifts as a painter soon earned him the protection of leading figures at court such as the judge of the Consejo Real, Francisco de Tejada, and Giovanni Battista Crescenzi, Marquis de la Torre. The latter had an important collection of paintings that allowed Pereda to become familiar with the naturalist style of Caravaggio and his followers through the more classicising and gentler interpretation of that style by Bartolomeo Cavarozzi, another protégé of the Marquis who owned some of his works. Pereda’s style also reveals the influence of Jusepe de Ribera’s tenebrism, judiciously combined with a northern interest in detail.

Through Crescenzi, between 1634 and 1635 Pereda participated in the decoration of the Salón de Reinos in the Buen Retiro Palace, painting The Relief of Genoa. The premature death of the Marquis de la Torre in 1635 and the animosity that the Count-Duke of Olivares had always felt for Pereda’s protector meant that Pereda was excluded from court patronage from this point onwards, as a result of which he focused on religious painting and still lifes. During the 1640s and 1650s he received numerous commissions for large altarpieces such as the one for the Barefoot Carmelites in Toledo and the Profession of the Infanta Margarita with Saint Augustine and the Virgin for the convent of the Incarnation in Madrid. The success of such works earned Pereda enormous fame and recognition and allowed him to live a comfortable lifestyle until his death on 30 January 1678.

The present drawing depicts Tobias healing his Father, an episode narrated in the Apocryphal Book of Tobit. It relates how Tobias left for Nineveh in search of a wife then returned to his native city after meeting the Archangel Raphael. His mother Anna and his father Tobit awaited him, the latter blind from cataracts. The Archangel had advised Tobias to use the fish that he had caught in the River Tigris to anoint “the eyes [of his father] with the fish’s gall: the remedy will make the white patches shrink and fall from his eyes. Thus your father will recover his sight and see the light” (Tobit, 11.8). This is exactly the episode depicted in the present drawing.

With regard to its technique, this drawing can be related to others by Pereda such as the Pietà in the Academia de San Fernando (c. 1640-1650) or The Virgin presenting the Chasuble to Saint Ildefonso (British Museum, London). All of them make use of red chalk for the general outlines of the composition, over which the artist has applied sepia wash to create effects of light and shadow. Such a procedure indicates the mature Pereda’s mastery and his interest in experimenting with new types of compositions in his works. The result is a dynamic but perfectly balanced composition in which the slender figures move in an elegant manner. The gesture of the Archangel Raphael, on the right in the foreground, leads the viewer’s eye towards the principal scene where the seated Tobit is being cured by his son. Pereda thus moves the principal action to one side, in this case the left, although he marks the central axis of the composition through a wall which opens onto the background. He also skilfully closes the composition through the figure of Raphael on the right and the girl drawing back the curtain on the left. Another masterful element is the handling of the light, which is perfectly modulated through the device of opening up the background and thus allowing the light to enter and creating a more pronounced sense of depth.

Another very similar drawing on the same subject but with a reduced composition and vertical format is in the Casa de la Moneda in Madrid (190 x 154 mm). 2 The two would seem to be preparatory studies for Tobias healing his Father painted by Pereda in 1652 (Bowes Museum, Barnard Castle, UK). 3 However, the fact that the composition is more extensive and complex in the present drawing but lacks some important elements such as the fish and the dog may suggest that it is a subsequent development or a later reinterpretation.