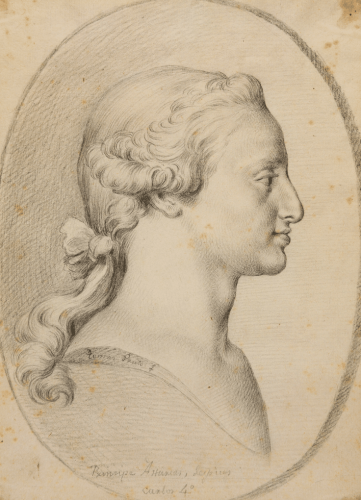 The Prince of Asturias, Charles of Bourbon, future Charles IV

In 1764 the marriage was agreed between the Prince of Asturias, the future Charles IV of Spain, who was 16, and his cousin Maria Luisa of Parma, aged just 13. In the spring of the following year and to mark the forthcoming event Charles III commissioned a commemorative medal from Tomás Francisco Prieto whom he had appointed head engraver to all the mints in Spain and the South American colonies in 1761. 1 The medal was also to be the official one to be given as gifts to diplomats and as such also had to bear an image of the present monarch, which would thus be updated given that the one in use at this date had been created to mark Charles III’s coronation in 1759. 2 The medal was commissioned from Prieto in the name of the Academia de San Fernando and its design and execution were coordinated by the scholar and collector José Nicolás de Azara in his position as an official of the Secretariat of State. 3 The medal was struck in three different materials, gold, silver and bronze, of which the majority were in silver, with a total of 400 in all (fig. 1). 4

The choice of Tomás Francisco Prieto for such an important project was an obvious one, given that Prieto was one of the most renowned Spanish artists of the second half of the 18th century. Trained in the taste for Italian and French medals by the engraver Lorenzo Monteman y Cusens in Salamanca, Prieto established his own studio there and remained in the city until 1747 when he obtained the position of principal engraver to the Royal Mint in Madrid. His astonishing abilities and mastery meant that just one year later he was made principal engraver to the King. 5 After the founding of the Real Academia de Bellas Artes de San Fernando in 1752 Prieto would become its head of printmaking and, as noted above, would be appointed head engraver to all the Spanish mints and those in the South American colonies in 1761, once again as a result of his outstanding merits. As engraver to the King, Prieto was obliged to produce the designs for the motifs to be represented on coins and medals and to engrave them on steel blocks.

A total of four proposals were produced for the medal to mark the marriage of the Prince and Princess of Asturias, some with variants and all perfectly documented. Various learned individuals such as Eugenio de Llaguno and Ignacio de Hermosilla were involved. 6 In all the different proposals the obverse of the medal bore an image of Charles III, albeit with different inscriptions. A wide range of ideas were proposed for both the text and the image on the reverse, including facing busts of the couple, the joining of their hands in the presence of the King, and an allegorical representation of the union of the two branches of the Bourbon family. 7 The winning idea, which was probably a collaboration between Prieto and Ignacio de Hermosilla, secretary to the Academia de San Fernando and author of the inscriptions on other medals by Prieto, had a bust of Charles III on the obverse with the motto “Parens Optimus” while the reverse depicted the superimposed busts of the Prince and Princess and included the phrase “Publicae Felicit Pignus” (AHN. Mapas, Planos y Dibujos de la sección de Estado, sig. 1022). Both Charles III’s face and those of the young couple varied between these drawings and the ones finally depicted on the medal due to the involvement of Anton Raphael Mengs, first painter to Charles III, in the creative process. As recorded in a letter from Prieto to Azara dated 23 May 1765, Mengs supervised the designs and advised Prieto on the idealisation of the three figures’ faces. Together with his letter Prieto sent Azara a wax model of the head of Prince Charles (fig. 2) and three drawings of the busts of the three figures. The present drawing, which is perfectly modelled and executed in black chalk, is very probably one of those sent to Azara given that the Prince’s face shows the serenity, contention and idealisation which is also emphasised in the wax model made on the basis of Mengs’s guidelines. 8 Nonetheless, while conforming to the latter’s indications, the Prince’s nose and his facial features in general are slightly more softened, both in the drawing and the final medal, as a result of which Prieto left his mark and artistic personality on the final design.

Prieto produced the complicated dies in relief for the obverse and reverse of the medal between May and July 1765 and on August 23 of that year he sent the first examples of the medal in gold and silver to Azara for his approval. 9 The King’s satisfaction with the engraver’s work is evident in the fact that he granted Prieto “a gratification of 9,000 reales de vellón” for “the perfection with which he engraved the medal made to celebrate the Prince’s marriage.” 10 This medal was extremely celebrated both within Spain and abroad, largely due to the fact that it was almost immediately disseminated by the engraver Manuel Salvador Carmona (BNE, IH/1711-32), becoming a model for later artists both for its perfect representation of the ideals and the aesthetic of Neo-classicism and for its technical excellence.