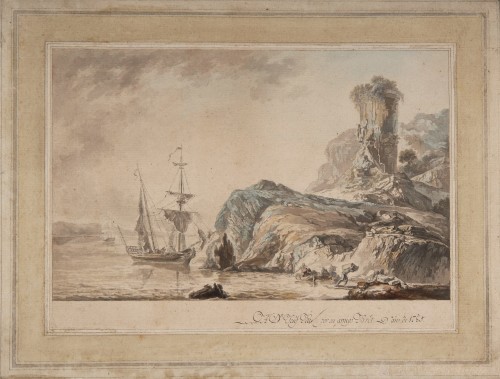 Unloading a Ship on an Estuary

This previously unpublished drawing was executed during the time that the artist Luis Paret y Alcázar was exiled in Bilbao and is one of a group of works generally related to the royal commission for Views of the Cantabrian Coastline, albeit prior to it. 1 This group comprises View of Bermeo (1783), View of the Arenal at Bilbao (1783), and Quayside of the Arenal at Bilbao (1784), which are all undoubtedly prior to the project; while Shipyard at Olaveaga, La Concha at San Sebastian, The Port of Pasajes, View of Fuenterrabía (including the preparatory study), and Coastal View with Figures (a fragment of the previous work) are not dated but can be placed between 1783 and 1786. 2 They constitute a group of works realised on different supports and in different techniques that brought Paret immediate recognition both from those who had commissioned them and at court.

The present drawing depicts a coastal schooner that has moored alongside for unloading, undertaken from two small boats from which the sailors carry the loads of cargo on their shoulders to the shore. The scene is set on a rocky point with a small lighthouse or ruined guardhouse. Another vessel is to be seen behind this one and a strip of land in the background, suggesting that the setting is an estuary, probably the river mouth at Bilbao depicted in other works of 1783 to 1786. The drawing is dedicated in Paret’s handwriting to an as yet unidentified individual. It can be described as dating from one of the most important moments in the career of the Madrid artist Luis Paret y Alcázar, namely the year of the death of his patron, the Infante don Luis, at which point the artist’s exile was revoked. 4

The composition is associated with another drawing by Paret known as View of Luchana (present location unknown) that belonged to Paul Oppé and was exhibited at the Royal Academy in 1958. 5 That sheet, which measured 330 x 450 mm, is inscribed “La ría de Bilbao por la Torre de Luchana con el Desierto de los P.P.Carmelitas Descalzos” and has a similar dedication to the present drawing: “A Dn. Josef Patrat[s] por su amigo Paret a 1785”, although Salas has noted that “the reading of the word as ‘Patras’ is questionable due to the poor state of preservation”. The question is thus whether the name refers to the same friend of Paret’s. In fact, this is probably not the case although a direct comparison of the two sheets would be extremely illuminating if it were possible. 6 It is not possible to be entirely certain about the wording of the dedication on the present sheet, which could either read “Pal” or “Pai”, with a possible “s” at the end, assuming this is not just a calligraphic flourish.

It may be worth looking at some of Paret’s acquaintances and their occupations during this highly significant period of his life. In 1785 the artist was extremely active professionally, maintaining professional contacts with parishes in Bilbao, Larrabezúa and Viana, and moving in a geographical area which probably includes the view depicted here. Thanks to the surviving correspondence of the artist in Viana we know that Paret visited Vitoria, although it is not known why. 7 At the end of the year, in December, he was again in Bilbao, commissioned with the decoration of the Town Hall and thus consolidating his reputation there following his designs for various fountains and for the city’s slaughterhouse. 8

In addition, and indicating another area of professional activities and social relations, Paret was associated with various leading members of the Real Sociedad Vascongada de Amigos del País [Royal Basque Society of Friends of the Country], including its founder, José María Munibe, Count of Peñaflorida, whose portrait Paret executed as a preparatory design for a print that same year. 9 Other connections included José María Aguirre, Marquis of Montehermoso, Joaquín Hurtado de Mendoza, Count of Villafuente Bermeja, and the Luzuriagas. 10 Paret was also active as a picture and print dealer at this period, 11 another indication of the energetic undertakings of an artist who took advantage of all the opportunities offered to him by this cosmopolitan city, the port of which was a gateway to Europe.

It is thus likely that the present drawing was executed in the same geographical region and in the same context as the views that Paret would use to court friends and clients, such as the view of Luchana. All these works were extremely well received at the time and we should bear in mind the words of the secretary to the Ministry of Grace and Justice when informing Paret that his term of exile had been revoked: “You are the only one of those exiled for supposedly contributing to the disobedience of his High Royal Highness who has not been allowed to return to Madrid, and the person who created and sent to the Prince the Fine views of Bilbao and Portugalete”. Those views would gain Paret the above-mentioned royal commission in 1786, a time that was undoubtedly crucial in the artist’s career.

[1] On 4 July 1786 Charles III commissioned Paret to “travel through the Coastal ports, painting views of them”.

[4] In 1775 Paret was exiled to Puerto Rico for acting as go-between in the Infante don Luis’s amorous affairs. He returned to Spain in 1778 and decided to move to Bilbao, in accordance with the fact that he was not allowed to come closer than 40 leagues to the Court and was thus still banned from his native city of Madrid. Following the death of the Infante don Luis on 7 August 1785, Paret wrote to the Count of Floridablanca (on 30 October) asking for his protection (Archivo Histórico Nacional [AHN], Secc. de Estado, Leg. 2566, doc. 154). On 24 November he obtained a favourable reply from the secretary of the Count’s Ministry, which lifted the ban on his presence in Madrid (AHN, Secc. de Estado, Leg. 2566, doc. 152).

[6] This drawing was in the Bicknell collection until it was sold in 1921 but its present whereabouts are unknown given that it was not among the collection acquired in 1996 when the Tate Gallery acquired the Oppé collection. A possible suggestion is that “Patras” or “Patrat” could be the French actor and playwright Joseph Patras (1733-1801).

[9] Although Peñaflorida died on 13 January 1785 so the work must have been completed after the sitter’s death.

[11] As mentioned in a letter of 14 November 1785 by Pedro González Sepúlveda (BNE, MSS/12628) that refers to Paret’s visit to the monastery of Santo Domingo in Vitoria, although the exact date of this visit is not known.