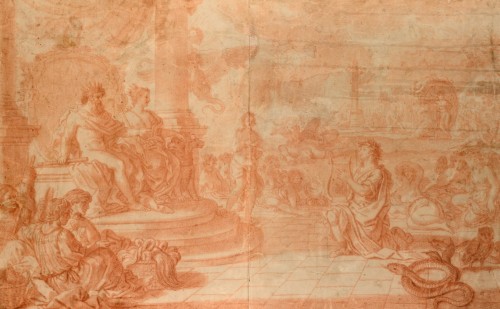 Orpheus in the Underworld

During the seven years between 1721 and 1728 that Vieira Lusitano spent in Rome, to where he fled to avoid the wrath of the family of Inés, the woman with whom he was in love, he achieved some degree of fame in the city and was made a member of the Accademia di San Lucca. While in Rome Vieira also made several attempts to secure the intercession of King João V of Portugal and to regain his favour and employment at the court in Lisbon. One of these took the form of sending the monarch an oil painting of Orpheus in the Underworld, dispatched by the Portuguese diplomat Alexandre de Gusmão on the artist’s behalf. The composition represented an allegory of the situation in which Vieira and his beloved found themselves at the time. The original canvas was lost, possibly in the earthquake in Lisbon of 1755, 1 but various drawings of it survive, including the present sheet. Vieira was an avid reader of Ovid’s Metamorphoses, using it as a constant source of inspiration for images and narratives in his works and with the present composition he demonstrated his knowledge of classical mythology through which, and combined with the skill of his brushes, he attempted to secure the intercession of the Portuguese monarch.

The drawing has a complex composition with a large number of figures. It is in fact Vieira’s most ambitious work and one of the most significant within his oeuvre, for which reason it is described in detail in his autobiography, published in 1780. 2 Celebrated for his mastery at playing the lyre, the Thracian poet Orpheus is shown kneeling in the foreground. After his wife, the nymph Eurydice, died from a snake bite Orpheus decided to descend into the Underworld in order to bring her back. He used his skill at playing the lyre before Pluto, god of Hades, in order to plead for his wife’s release. Pluto and his wife Proserpina are seen here seated opposite Orpheus on a large throne on a raised platform flanked by two columns. Eurydice is visible slightly further back into the composition, shown half-nude and modestly trying to cover her body. She is located on the edge of the Underworld rather than actually in it given that she represents Inés, who had taken her holy vows on entering a convent and could thus not be in Hell. In one of the lower corners are the Fates, the three spinning sisters who personify the thread of life from birth to death, while in the opposite corner is the snake whose bite killed Eurydice. In the background Vieira included the Underworld with a column with flaming torches in the centre. Around it are some of the most celebrated mythological inhabitants of that region: King Midas lying on the ground; Ixion tied to a burning wheel with a mocking Juno next to him; Charon steering his boat across the Styx; and the giant Tityus whose liver is being devoured by an eagle.

The scene has a clear allegorical significance. Vieira depicts himself as Orpheus in one of his first self-portraits. His beloved Inés is Eurydice, who in real life had been sent to a convent and whose freedom Vieira was attempting to secure through the mediation of João V, represented by Pluto in the drawing. The fact that Vieira sent his painting to the monarch can thus be seen as a plea for help discreetly disguised as a mythological image.

As noted above, the painting was sent to Lisbon in 1727 and was lost in the earthquake of 1755 but various drawings of it survive. The present one is a counterproof of the sheet in the Museo de Évora (fig. 1, inv. no. 672). 3 Both are executed in red chalk and are of exactly the same size (470 x 760 mm) and composition, although the counterproof is naturally in the reverse direction to the original. The artist’s signature, located on the strap across Orpheus’s chest, clearly indicates which is the original and which is the counterproof. 4 Having made this reverse image, Vieira Lusitano reinforced its principal lines to give it more definition and in order to be able to take another counterproof. That second one, which is logically in the same direction as the original in the museum in Évora, has recently reappeared and is characterised by its faint colour and lack of precision in the details (fig. 2, Lisbon, private collection). It is thought to be the one that the artist gave to Alexandre de Gusmão in thanks for having sent the painting to the Portuguese monarch. 5 Finally, there is one more version in the Martin von Wagner Museum in Würzburg (inv. no. NZ9868. Red chalk on paper, 460 x 765 mm). In that work, however, there are significant differences in the image: Orpheus is playing the violin rather than the lyre, there are fewer figures and the execution is freer, suggesting that it could be an initial version for the painting. 6 What is clear is that the existence of various surviving drawings of this composition reveal the artist’s clear intent to ensure a visual record of his work, considered one of his most important creations.