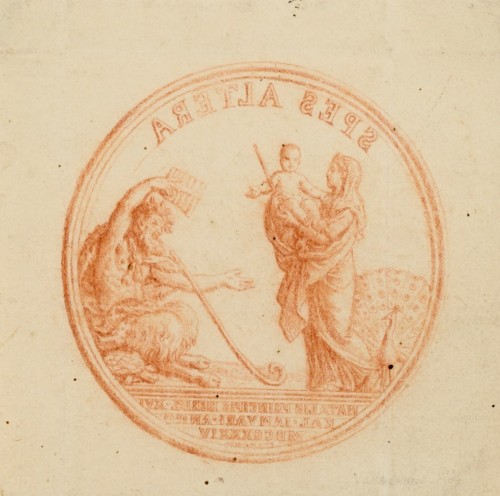 Spes Altera. Commemorative medal for the birth of the Princess Maria, future Maria I of Portugal

Although the painter Francisco Vieira de Matos, better known as Vieira Lusitano, was one of the leading Portuguese artists of the 18th century the notoriety of the events of his private life meant that he did not receive the recognition due to him as an artist. 1 From an early age Vieira Lusitano showed a marked interest in drawing, devoting himself in Lisbon to its study and to the humanities. His drawings came to the attention of the Marquis of Abrantes, who was at that date appointed ambassador to Rome and who suggested that the artist accompany him there to complete his training. At the age of just twelve Vieira Lusitano thus left Lisbon and became a pupil of Benedetto Luti in Rome. At the same time, he produced drawings for the Marquis of Abrantes for the festivals and religious events that took place in Rome, while also depicting the liturgical objects that adorned the various altars of Saint Peter’s. Following the Marquis’s return to Lisbon, Vieira Lusitano remained in Rome for a further two years where he studied with Francesco Trevisani and where he received one of the prizes awarded by the Accademia di San Lucca for his painting The drunken Noah before his Sons. In 1719 he returned to Lisbon after a period of seven years in Rome where he gained the nickname of “Il Lusitano”. 2

Following his return he rapidly secured a commission from João V, but in Lisbon the artist fell in love with a young woman from a noble family, Inés Elena de Lima e Mello, but in order to ensure that they remained apart her family obliged her to enter the convent of Santa Ana. Vieira Lusitano attempted to secure the king’s help in freeing Inés and in the light of his refusal he returned to Rome in 1721 to obtain an audience with the Pope. He secured a papal bull to annul Inés’s vows but was obliged to remain in Rome given that his life was in danger, being made an academician of San Lucca in 1728. That same year Vieira Lusitano again returned to Lisbon where he succeeded in liberating Inés although he was wounded in the process by a bullet fired by her brother.

After marriage to Inés, Vieira Lusitano took refuge between 1730 and 1731 in the monastery of Santa Catalina, where he painted a series of hermit saints in the crossing of its church. Realising that he was still in danger, in 1732 he decided to return to Rome but stopped on route in Seville where the Spanish court was residing at that moment. There he worked for Philip V. 3 However, one year later the artist was summoned back to Lisbon by João V to succeed the deceased royal painter Pierre-Antoine Quillard (1701-1733). Vieira Lusitano then enjoyed forty years of professional success and reputation until the death of his wife Inés. In 1774 he retired to the monastery of the Beato Antonio where he spent his last years writing his memoirs. 4

Shortly after his return to Lisbon, the year 1734 saw the birth of the first child of the Portuguese heir to the throne, José of Portugal (1714-1777), and Maria Victoria de Borbón (1718-1781), daughter of Philip V of Spain and Isabella Farnese. The first-born child was a girl named Maria Francisca Doroteia. Her parents then had three further daughters, for which reason and following the death of José I in 1777, Maria ascended the throne of Portugal as Maria I. The birth of this first child was celebrated at court and the present drawing for a medal by Vieira Lusitano relates to these festivities. It is inscribed in the upper part “Spes Alta” [Hope for the future], a Latin phrase widely used on commemorative medals that celebrated the birth of an heir at the various European courts. 5 In the centre, and revealing the artist’s interest in classical mythology, is a scene of Juno holding a baby in her arms and a baton of command, a reference to the position of power that Maria as heir to the throne would one day occupy. At Juno’s feet is a peacock, the attribute of the goddess and a reference to glory. In addition, during the Roman era the peacock was a personal symbol of princesses and empresses, thus associating the new-born girl with the power of these figures. The baby has a serene, triumphant expression and is juxtaposed with the figure of the god Pan who, in parallel and on the opposite side, tries to attract her attention with a grimace and by offering her music and playthings. The scene can thus be read as an allegory of the responsibilities attendant on children destined to rule from birth and who must thus leave behind the distractions and amusements of life.

This design is the counterproof of a drawing for a medal in the Museo de Évora (fig. 1, inv. no. ME699). 6 This was a technique derived from engraving that Vieira Lusitano learned in Rome and which he frequently used as a method to duplicate his designs (see the next drawing by the artist in this catalogue). The counterproof is achieved by pressing the original drawing between printing plates onto a blank sheet of paper while the red chalk is still fresh, thus imprinting a reversed image of the original design. This also explains why red chalk was the artist’s preferred medium for drawing, as it allowed him to “copy” them more easily.

Vieira Lusitano’s oeuvre includes various designs for commemorative medals, including the Portrait of João V (Museo de Évora, inv. no. 684/1-4), and those for The Recompense of Virtue and Spring (fig. 2, Museo de Évora, inv. no. 674/1-5). They reveal not only the artist’s preference for red chalk and the fact that some of them are counterproofs, but also his use of mythology and classical Roman symbols to devise allegories that endow these images with the erudition and intellectual weight which he habitually displayed, thus demonstrating the nobility of the art of painting. 7