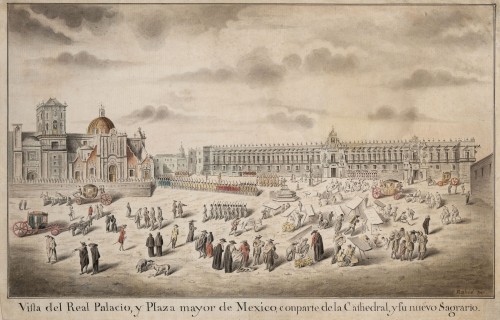 Following Christopher Columbus’s discovery of South America in 1492, a new world opened up, not only geographically but also in economic and cultural terms. During the early post-conquest years the principal interest for the colonisers lay in locating and extracting minerals such as gold and silver. From the 16th century onwards, however, political structures of government began to be created. In 1535, for example, the Viceroyalty of New Spain was officially created and its capital, Mexico City, founded. The Viceroyalty initiated and organised a wide range of economic activities such as livestock raising, agriculture, mining and commerce, while together with the Catholic Church it also established the principal guidelines for the education and health of the indigenous population. The exoticism of the new regions described by travellers and explorers meant that in the 16th and 17th centuries some artists ventured to South America in order to reflect this new culture while figures such as Montezuma, an individual of great presence and royal dignity, entered the European imagination through the theatre, novels and the opera. Nonetheless, the vision that these artists conveyed of the New World at this period went no further than the recording in prints and drawings of anthropological and ethnic curiosities and the documentation of certain new scientific species. 1

The dawn of the Enlightenment in the 18th century saw the rise of a new conception of the world and of man and South America and its peoples were of renewed interest. At this point we see the arrival in the continent of scientific expeditions that set out to study the region’s flora, fauna, archaeology, peoples and customs as well as its urban landscape.

Accompanying these exhibitions were artists who were employed to visually document and disseminate the different natural and artistic features of South America. One of the areas of most importance for this activity was the Viceroyalty of New Spain given that it combined ancient culture through the survival of Aztec archaeological ruins, exuberant vegetation and thriving city life and monumental modern architecture. The centre of almost all attention was its capital, Mexico City, which had been built over the old México-Tenochtitlán. In order to fulfil its new role as the political, financial and administrative centre of the Spanish territories in the New World, the authorities set out to embellish the city to the greatest degree possible, filling it with large buildings of the colonial type, combining indigenous and European elements. Among these projects, the Plaza Mayor or Zócalo in Mexico City became the heart and stage of New Spain. Located over the site of the old ceremonial centre of Tenochtitlán, the great esplanade was surrounded on all four sides by the city’s most important buildings: the cathedral, viceregal palace and the City Council buildings. Logically, the Plaza was thus the focus of attention on the part of travelling artists visiting the city, who must have been impressed by what was considered the largest and most beautiful metropolis in Spanish South America. An example of this fascination is the drawing presented here, depicting a View of the Royal Palace and the Plaza Mayor in Mexico City, with part of the Cathedral and its new parish Church. Executed in ink with coloured crayons, it uses subtle washes to lightly sketch in the cloudy sky and ground. The almost photographic detail allows the viewer to study in detail the state of the buildings surrounding the Plaza, the clothing of the figures, which corresponds to the reign of Charles III, and the type of carriages used at this date. The present drawing is thus an exceptional document for knowledge of the Plaza Mayor in Mexico City in the second half of the 18th century.

On the far left of the sheet is the cathedral, truncated by the edge of the composition to show only one of the two towers, of which only two sections had risen from the ground by this date. Next to the cathedral is the recently completed Sagrario, which combines the functions of cathedral parish church, sacristy and place to house the Host. This structure was consecrated in February 1768. 2 These two buildings, the cathedral and its accompanying church, allow the present drawing to be precisely dated as there is an oil painting of 1764 in the Franz Mayer collection that depicts Mexico City Cathedral under construction, showing these buildings as less complete. In the painting, for example, the cathedral’s tower lacks the sloping roof that appears in the present drawing. In the centre of the composition is the viceregal palace, rebuilt from 1711 onwards in a colonial Baroque style. Opposite it is the Column or Pyramid of Ferdinand VI, erected in honour of the Spanish monarch following his proclamation in 1746, and the Octagonal Fountain, installed in 1713 and crowned by a metal eagle. The remainder of the scene is occupied by the esplanade of the Plaza, which is filled with a wide range of figures: soldiers engaged in exercises and dressed in their striking uniforms; street musicians; playful dogs; carriages moving from one side to the other; Indians transporting goods; people buying and selling local products such as bananas from the typical stalls positioned around the square, and so on. The artist offers us a complete portrait not just of the architecture and urban design of this location but also of the people and range of social classes that populated the city at this date.

The author of this drawing is René-Gabriel Rabié, as indicated by the signature “Rabié Del.” which appears in its lower right corner. Rabié, member of a family of French sailors, lived for a long time in Haiti and the Caribbean. During those years he worked as an architect, cartographer and naturalist. The plants and animals shown in his series of excellent illustrations, including some species of butterflies, were created even before they were formally described. His pictures helped in the detailed study of a large number of birds carried out by ornithologists of the eighteenth and nineteenth century. Towards 1768 he moved to Mexico City as part of an expedition to document in detail the life and singularities of the great Viceregal metropolis.